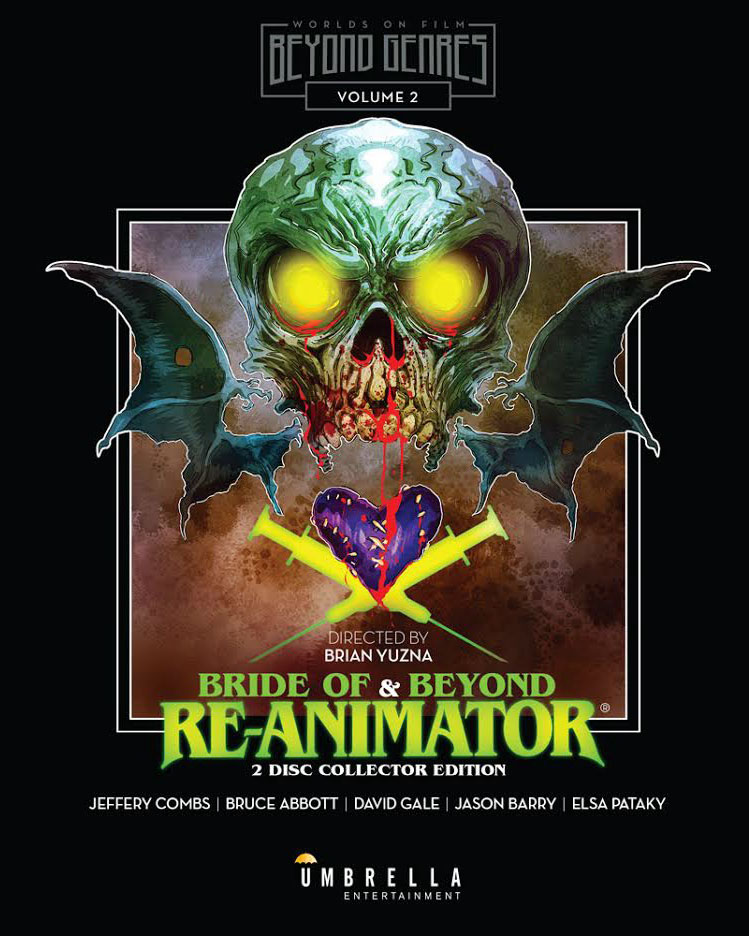 We continue our journey into H.P Lovecraft’s Re-Animator with the next two sequels in the series, Bride of Re-Animator and Beyond Re-Animator, released on a two pack Blu-ray from Umbrella Entertainment.

The strange Dr Herbert West and his unfortunate protege Dr Dan Cain are back for another wack at bringing the dead back to life. 18 months have passed since the massacre at the Miskatonic University, but that hasn’t stopped West from improving on his serum and trying to piece together a human. Things don’t exactly go according to plan, which is the usual when it comes to West.

Bride of Re-Animator takes a lot of what fans loved from the first movie: the gore, Dr Hill’s decapitated head, humour, and West; and expands on it. I get way more enjoyment out of Bride than the first movie, much in thanks to Jeffery Combs returning performance as Herbert West and his insane mission to defeat death, even though every single time he tries it ends up bringing back a murdering monster. Fans may be a bit disappointed that Dr Hill’s head is barely in the film, and only serves to bring a bit of trouble into West’s life, but come on, who can not love seeing bat wings sewn to Hill’s head. Sure, the effects are hilarious, but in a good 80s kind of way (you know, that warm and cosy feeling).

As for the actual bride of the title, she only appears near the conclusion to the film, but boy, what an entrance and what a freaking insane ending. Wonderfully over the top is thy name.

Umbrella Entertainment provides both the theatrical and unrated cuts on the Blu-ray and it is noticeable when the unrated footage pops up, as the colours aren’t as vibrant and detailed as the theatrical footage. However, this has always been a problem with the film on past releases, and it’s nice having that gory plasma filled footage included. Audio provided is English DTS-HD Master Audio 2.0, and there were no issues present.

Extra features provided on the disc are not new to this release but are still welcome nonetheless. The features range from audio commentaries, interviews, and behind the scenes footage. As I’ve said, nothing new, but if you don’t own past releases, it’s nice to have it all in one place.

Thirteen years later and this is what we get? A super low budget shot in Spain Re-Animator sequel that barely manages to invoke any of the good feelings we got from the first two films. Beyond Re-Animator has a few saving graces, but the cheap look of the film tends to bring things down.

What are those saving graces you are probably not asking? Well, for one, it’s always nice to have Jeffery Combs back as Dr Herbert West. Sure, he has aged, but he is still as crazy as ever. Now, West is locked up in prison for the crimes he committed at the end of the second film (shown to us during a fun intro scene involving a dead person trying to drink milk without a mouth attached to his face. Probably the only effect in the film to be perfectly honest.) The other saving grace is Elsa Pataky, the unlucky reporter who attracts the evil eye of the rat-faced warden. Why is Elsa Pataky a saving grace? is why Elsa Pataky is a saving grace:

While it’s nice to have director Brian Yuzna back behind the camera, and the script does try to expand on West’s regenerating formula, sadly the flick just doesn’t come together and feels too detached from its predecessors. There is a bit of fun to , but the bad far outweighs the good with this lifeless sequel (but hey, rat vs dick fight is pretty gnarly!)

The Blu-ray from Umbrella Entertainment tries its darndest to make Beyond Re-Animator look nice, but it still doesn’t quite get rid of the softness of the film. If anything it seems like a slight upgrade from DVD, and the sound, DTS HD Master Audio 5.1 has a lot of distortion during loud scenes. Still, nice to finally have the film on Blu-ray, albeit packaged with a far superior film.

Like Bride of Re-Animator, all the extra features supplied on the Blu-ray have on previous versions. Like Bride, though, it’s nice to have them all in one spot. Plus, once you watch the music video for Dr Re-Animator: Move Your Dead Bones, you’ll never want to another extra feature ever again.

So, I ended up loving Bride of Re-Animator and walking away disappointed with Beyond Re-Animator. How does my useless opinion stack up with yours? Let us know by commenting below!