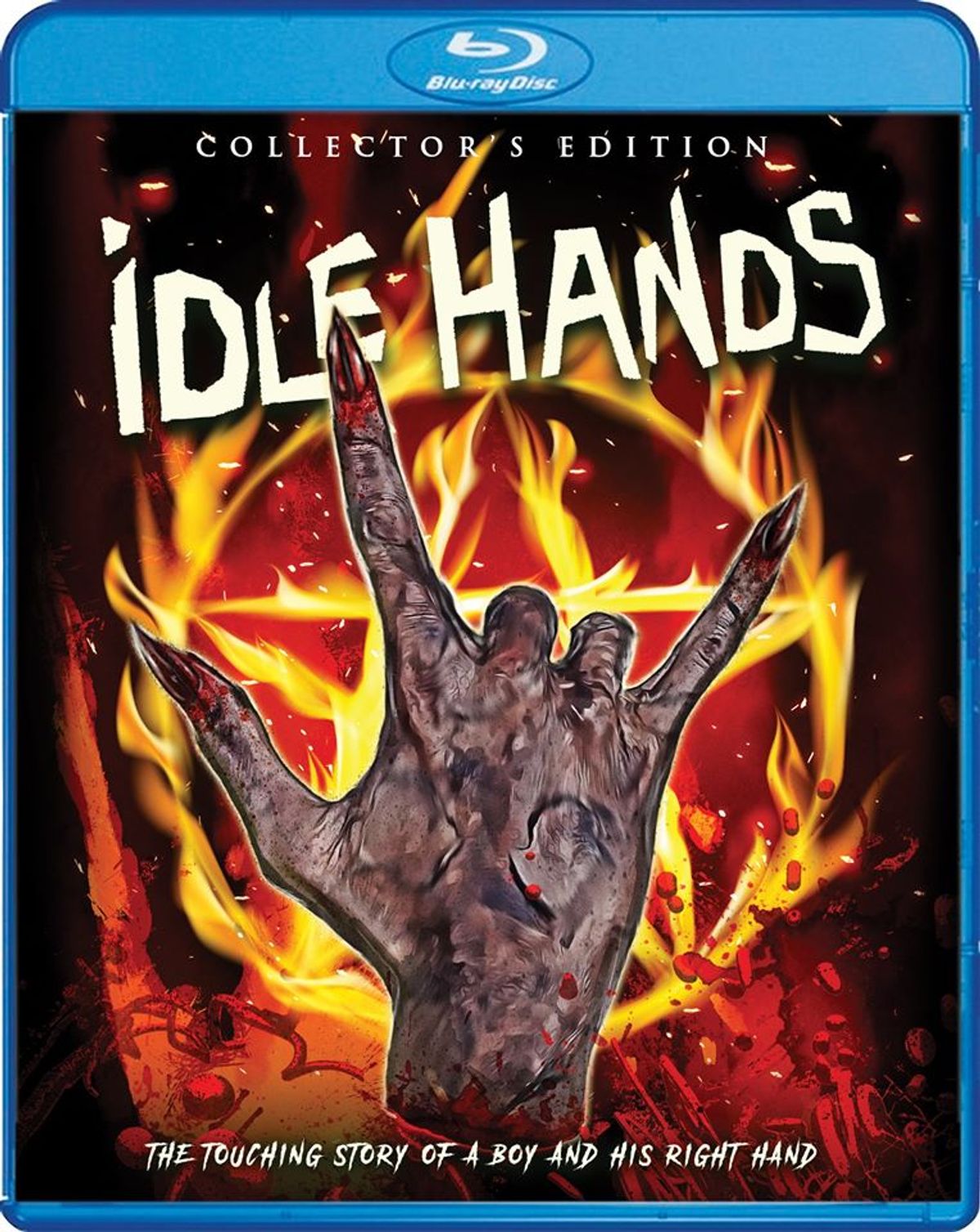 Stoner comedy is hard to pull off, especially if the intention is not to just appeal to stoners. There’s a tendency for some gags to come off trying too hard, forcing the casual toker to groan, “Okay, we get it – you smoke” (see the comedy of Broad City). But when it’s done right, both potheads and regular filmgoers can appreciate the stereotypes at play. Idle Hands, from writer Terri Hughes and director Rodman Flender, is able to juggle the difficulties of three different cross-genres, melding the stoner antics of its protagonists with a funny script that capitalizes on some of youth’s greatest fears: not being able to smoke weed, but doing it so much you don’t do anything productive.

The film focuses on Anton (Devon Sawa) and his weed-infused friends Mick (Seth Green) and Pnub (Elden Hanson) after the discover that not only is there a serial killer in their neighborhood around Halloweentime, it also happens to be Anton himself due to his possessed hand (played by hand actor Christopher Hart). Anton’s so used to getting up, getting stoned, and hanging out on his couch that he doesn’t even notice that his parents have been murdered; eventually, though, his hand begins to rebel against him, cockblocking him from getting with Molly (Jessica Alba) in the process. It’s up to a few stoners and an occult specialist (Vivica A. Fox) to save the world.

Idle Hands‘ script is all over the place, but in a good way; it’s not just Seth Green that draws parallels to the film’s contemporary peer Buffy the Vampire Slayer, with the film a more comedic, weed-centric episode of the show that features a portal to Hell opening, a Chosen One-type character, and even zombies returning from the grave. But the major boon of the film is that it’s actually funny and it has a good handle on when to use stoner humor and when to forego that for comedy centered around its gory fun.

Sawa is a treat in his role, which requires quite a bit of physical acting; his hand motions once The Hand’s personality takes off are a sight to behold, especially because the slapstick humor takes focus to perform while acting at the same time. If anything, it’s upsetting that Idle Hands doesn’t feature Sawa’s hand performance more; it’s one of the major attractions in the first half of the movie.

The other thing that works well, though, is the film’s overarching theme. At the beginning, Anton is pretty satisfied with just sitting around getting blazed; remembering the good times he’s had with his friends, he realizes that all they’ve really done is get high. Idle Hands has the classic motivational hero story, but this time works weed into it; while the ending slightly overrides the main idea, the film comes to the conclusion that partoking in moderation is probably the best way to be – you can get stoned but have an important role in your life at the same time.

CHECK OUT
Our extensive screenshots from this Blu-ray.

Scream Factory has released Idle Hands with a Collector’s Edition Blu-ray that focuses on new special features instead of a restored transfer. The Blu-ray retains the same HD scan as the previous Image Entertainment release from 2013. At first, that might not sound promising – a Collector’s Edition makes use of a scan from seven years ago? Yet on viewing the video, one can see the reason why Scream Factory decided not to revisit print materials for the film; the transfer already looked excellent. Grain is consistent but kept to the bare minimum,with a very light sprinkling. Dark scenes are well-maintained without crushed blacks and the film’s occasional use of red and green hues are at full effect. Overall, despite the age of the transfer this still looks exceptional.

Audio is presented with both 5.1 and 2.0 DTS-HD Master Audio tracks. In keeping with Scream Factory’s recent track record with 5.1 audio, that track is a bit lower in volume than the 2.0, which isn’t a huge deal except for adjusting the volume. Otherwise, neither track has any major issues apparent. English subtitles are included as well.

For extras, Scream has included a few new features, mainly interviews with the cast and crew. Rodman Flender provides a 12 minute interview, and actors Sean Whalen, Elden Henson, and Christopher Hart also give brief discussions about working on the film. Writer Terri Hughes Burton talks for about 5 minutes about the creation of her story and ending re-writes. Also new to this disc is an audio commentary featuring Seth Green, Elden Henson, Devon Sawa, and Vivica A. Fox to complement the other included commentary with Flender, Henson, and Green.

Ported from the previous Blu-ray are deleted scenes with optional audio commentary from Flender, a vintage making-of featurette, storyboard comparisons, and a film trailer. The Blu-ray also features reversible artwork.

This is a good Blu-ray, but I do have to mention that if you already own the Image Entertainment Blu-ray or if you don’t really care about special features, it’s not really worth the upgrade since there is no difference in picture quality. However, if you do want some added bonuses, this is a good Blu with great video even despite an older scan.