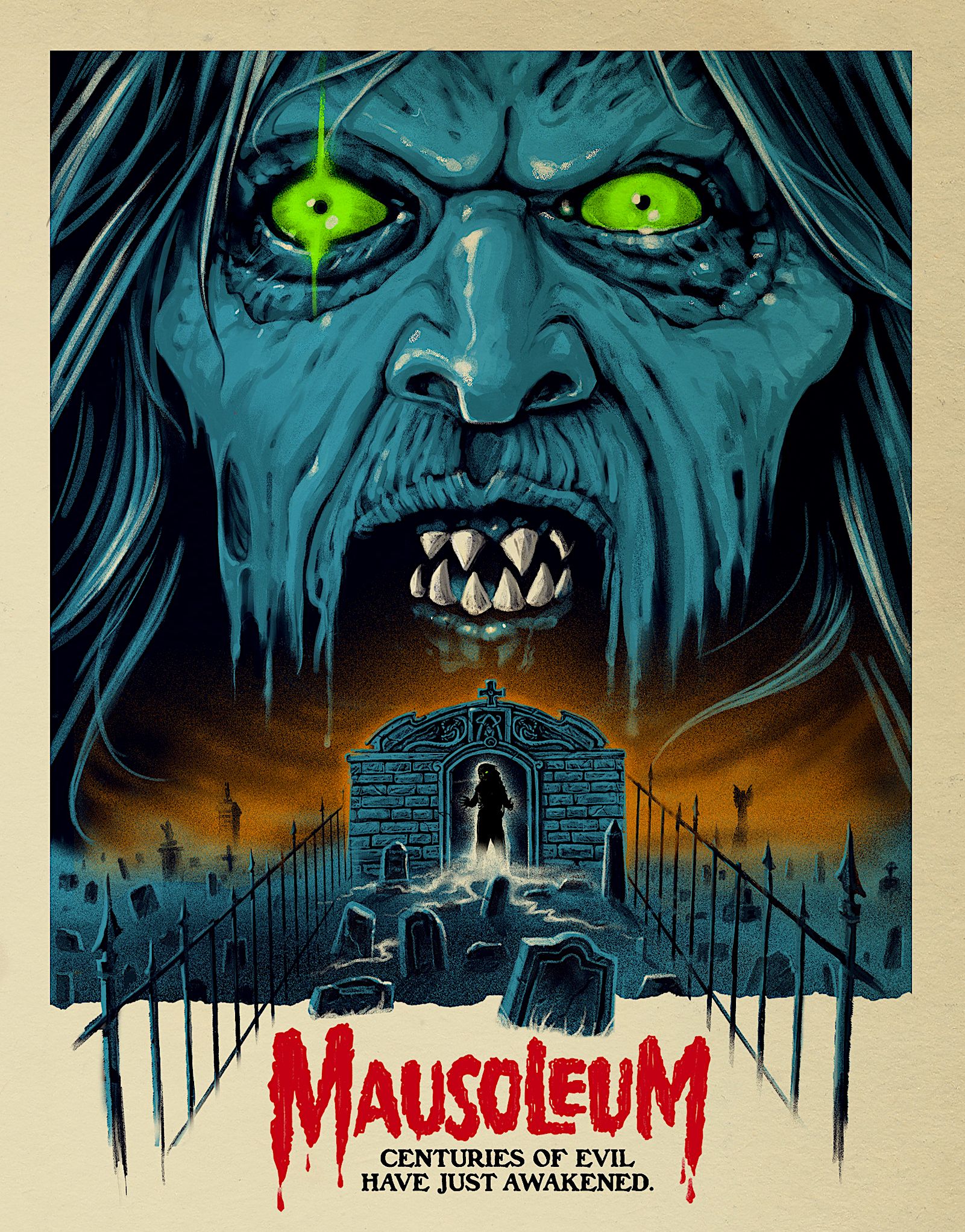 Mausoleum is a great gem, an encapsulation of '80s horror that all fans should appreciate. Vinegar Syndrome have given the film an excellent new makeover that is just a little light on extras.
Film
Blu-ray
Reader Rating2 Votes
4.4

Sometimes the best films aren’t objectively good ones, and Michael Dugan’s Mausoleum certainly falls into that spectrum. The 1983 horror film is one of Dugan’s only feature movies; he also directed the children’s comedy Super Seal in 1976 and the sex romp Raging Hormones in 1999, but none of them had the cult staying power of Mausoleum, which finds buxom Bobbie Bresee playing a woman whose family lineage is cursed with demon possession. Filled with verdant lighting, sexual gratuity, and a significant smattering of poor writing, the demonic storyline rarely meets the bar for quality cinema, but it sure scratches an itch for bad film lovers.

The film follows Bresee’s character Susan, a member of the Nomed family who have, for years, had “mental health issues.” In this case, the women in the family have really been plagued by a demon that gets let out when Susan visits a family mausoleum as a little girl, eventually wreaking havoc on her life years later when it decides to manifest itself as a green-eyed, psychic killer inhabiting Susan. Her husband Oliver (Marjoe Gortner), a super fucking rich dude with a mansion of a house and a fancy car, is helpless to stop the transformation even with all of his money so he enlists the help of her psychiatrist Dr. Andrews (Norman Burton).

Mausoleum has a pretty standard plot about possession, but its depiction of said possession is the more interesting element of the film. This is partly due to Bresee herself, who is an alluring woman throughout the film and has the particular sensuality necessary to sell all of the men’s supernatural obsessions in the film. Though it’s not particularly stated, the Nomed demon inhabiting Susan is basically a succubus; she lures in hapless men – a gardener, a super aggressive guy at a bar who looks like he’s from the band Alabama, a bush delivery guy (no pun intended) – with the promise of sexuality, and then gets even hornier after the violent acts have been committed. Bresee was the right person for the part; she’s sexy, but not afraid to emphasize the cheesier elements of the film too, like wearing special glowing green contacts and making growling faces throughout her demon transformations.

But Dugan also doesn’t skimp on his fair share of what I’d lovingly term happy accidents. A lot of the film’s writing is downright ridiculous – the opening scene with Susan running through a cemetery as her aunt screams “Not you too!” in unprompted horror should clue the viewer in to the type of film they’re about to witness. There are crazy car explosions, a wise-talking maid, a demon with flesh-eating breasts, and a lengthy two minute demon transformation dissolve. There’s Marjoe Gortner looking exactly like the child pastor he used to be. The final shot makes absolutely no sense. It all should result in a terrible film, but Mausoleum is anything but. It’s awfully fun, and kudos to Vinegar Syndrome for recognizing this gem and giving it a proper release.

With that said, Vinegar Syndrome’s Blu-ray of Mausoleum looks one thousand times better than the last time I saw the film with a horrible VHS rip. Their new HD transfer rejuvenates Mausoleum with tons of color, especially enhancing the greens and purples in the mausoleum itself. Overall, the picture quality is excellent, although the occasional scene suffers from a bit of overwhelming grain, cigarette burns, and lines. There are also a few instances of wobble. However, this is a huge step up from Mausoleum‘s previous release and Vinegar Syndrome has done well with this restoration.

Audio is presented with a DTS-HD Master Audio 1.0 track, and it sounds particularly good with a robust soundtrack and good dialogue volume control. English subtitles are also included, and just as a personal preference, I will say that I find them a bit chunky-looking, taking up a large part of the lower part of the screen.

As far as extras are concerned, Vinegar Syndrome come up a bit short here. There’s only one new featurette, an 8 minute interview with special effects artist John Carl Buechler. It’s an interesting interview that is set side-by-side with effects scenes from the film itself, and Buechler shares some fun anecdotes about making the film; he also seems to be smitten with Bresee. Other than that, theatrical trailer, picture gallery, and TV spots are included. It’s unfortunate that Vinegar Syndrome were unable to get an additional audio commentary from film historians that could have padded the extras a bit more, but alas, it wasn’t meant to be.

Still, the real treat is just having Mausoleum released with such high quality audio and video – plus this limited edition’s thick slipcover and extra DVD. Fans of ’80s horror films will absolutely want to grab this when the standard edition is available, since the limited edition one with slipcover sold out quickly after it was released on Black Friday.