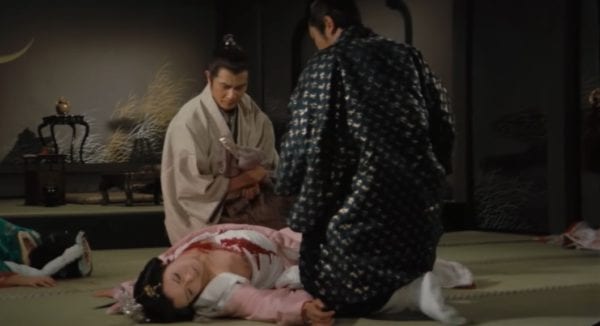 The second story follows Ochise (Mitsuko Aoi), who likes to incorporate simulated rape into her kinks after a sexual assault and kidnapping at the hands of a deformed man gives her some version of Stockholm syndrome wherein she actually gets turned on by the risks of this idea. Her servant Chokichi falls for her despite her constant teasing – which almost becomes cuckolding – and it eventually causes him to fly into such a frenzy that he mutilates his own face and accidentally murders Ochise. This tale is all over the place in terms of its sexually aberrant nature; there are rapist little people, there’s a horribly burned man, there’s a sex scene involving a black man due to its taboo at the time. And the conclusion is wild, too – what could be conveyed as a misogynist story about a sexually cowed figure who can’t cope with his lack of intimacy becomes a pretty somber take on obsession.

Finally, Ishii’s third story tells of a lord (Asao Koike) who has become so morally deviant in his sexuality that he actually pursues killing women in a variety of grotesque ways, apparently to try to seek out one that will be able to accept his sadomasochism with her own devotion to pain. He finds her after a pretty raucous scene involving a bunch of bulls being let loose on handmaidens dressed in red, resulting in an extended sequence where most of them are gored to death because they refuse to strip nude. It only gets weirder from there, as one of his handmaidens, Okon (Yujie Kagawa), is caught performing bestiality and is subjected to lead poisoning by being painted in gold, and then subsequently she reveals that the lord’s lover is actually his daughter pregnant with his own child (and grandchild!). This is the one where Orgies of Edo really steps off the deep-end, and it’s also the most fun tale despite its overlong bull sequence.

Arrow Video’s new Blu-ray release of Orgies of Edo sees the company providing a nice high definition transfer of the film in its original 2.5:1 aspect ratio. Overall the picture quality on this disc is very good, with a large range of colors thanks to the period garb and especially a beautiful setting full of floral tapestries. Ishii often provides scenic backdrops to counter the brutality of the film, too, and that is well-represented on this release with minimal grain, consistent skin tones, and an image full of detail. There is one particular shot in the second short that does appear of noticeably poorer quality, and there are a couple of minor film skips – I’m not sure if these were an error or on the film itself. Otherwise, though, great quality here that is consistent with their transfer on Horrors of Malformed Men.

Audio is presented in uncompressed LPCM mono and sounds fine; it’s not very dynamic and occasionally some distortion does come through with both dialogue and the musical soundtrack. English subtitles are obviously also included though they can be turned off.