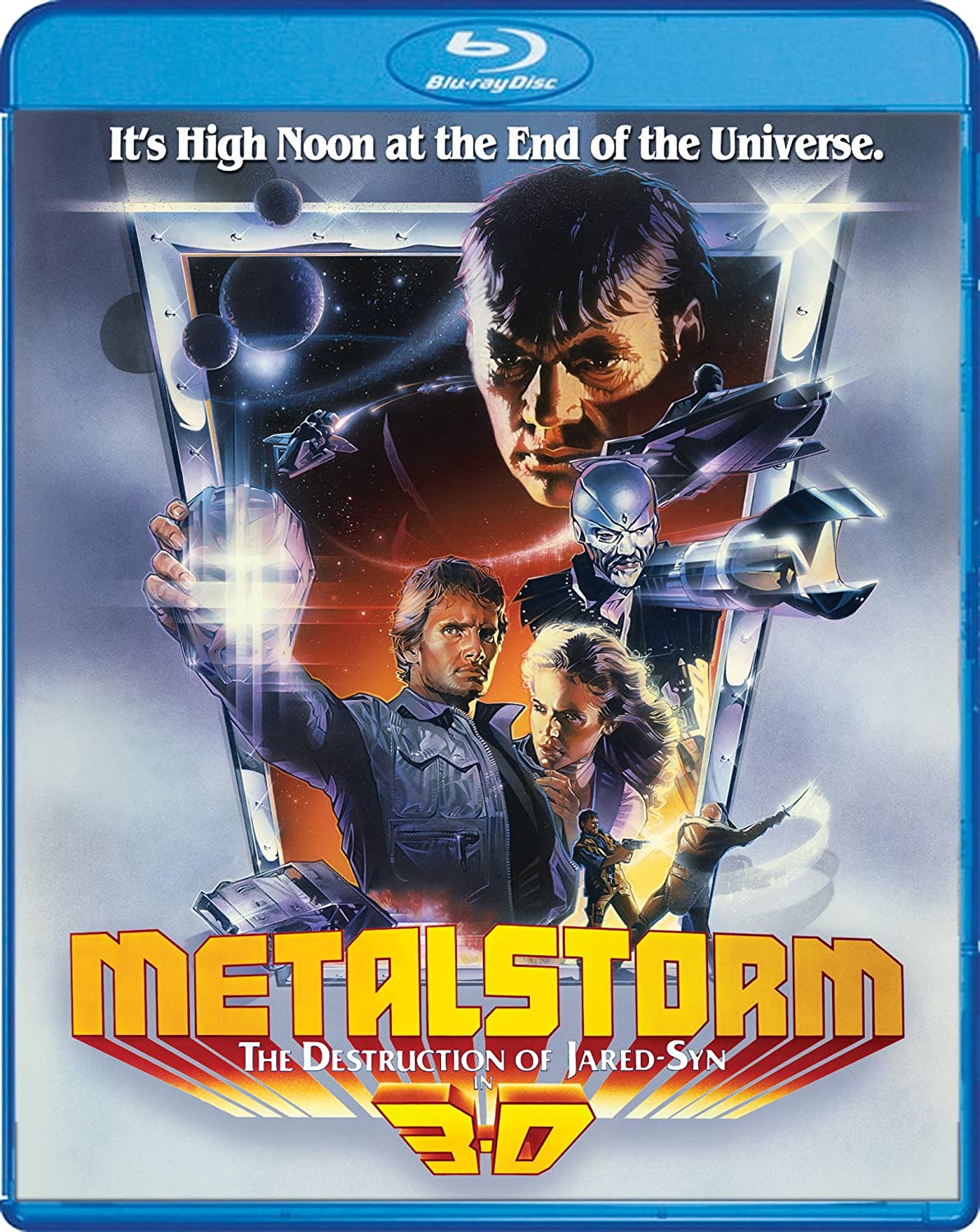 Metalstorm is a clone of Mad Max and Star Wars, but it never lives up to that potential
Verdict
The biggest problem with Metalstorm is that it is most often boring, lacking tension due to its storyline and poorly directed action scenes. However, Shout! Factory brings the film to life anyway with a nice 2D/3D package.
Film
Special Features/Quality/Packaging
Reader Rating0 Votes
The Good
Steals the best qualities of Mad Max, Star Wars, other science fiction stories
Excellent making-of featurette included on this disc
The Bad
Never has tension or stakes throughout the film
Poor characterization, low budgets, and messy direction don't help the film's case
3.6
Good
Buy
Amazon

The science fiction and horror genres are known for their reuse of common storylines. Zombie apocalypses, slasher killings, and living murderous puppets all get new paint jobs for movies that basically recycle concepts made popular in different eras. But Charles Band seemingly has made a career out of this sort of thing, making low-budget horror and science fiction films with plots borrowed from popular movies of the time. Metalstorm: The Destruction of Jared-Syn is no different; the 1983 science fiction action film directed by Band and written by cohort Alan J. Adler comfortably uses imagery and ideas from Mad Max while popping the storyline into a futuristic desert wasteland with settings and events similar to George Lucas’ Star Wars series. The only significant changes to those formulas is the lowered expectations due to budget restrictions and an emphasis on new 3D technology, banking on the popularity of recently released 3D films like Jaws 3-D.

Metalstorm: The Destruction of Jared-Syn is presented in 3D on this release from Shout! Factory, but since I don’t have a 3D television or any way to watch the 3D part of the film, I was stuck reviewing the 2D disc that also comes in this package. With that said, the 3D effects are, for the most part, easy to distinguish: any number of long things point out at the viewer, with laser blasts or thrown items shooting toward the audience. In this case, I don’t feel that I missed out on much by viewing the 2D feature.

Metalstorm stars Jeffrey Byron as main protagonist Dogen, a cross between Mad Max and Luke Skywalker in all the right ways; he’s got the hair, the looks, the brawn, and the orangish tint of a man spending a lot of time in the desert. Dogen is on the hunt for Jared-Syn (Michael Preston), a horrible dictator tyrant who has been attempting to farm souls into a small crystal in order to feed them to a large crystal, sparking a holy war between two opposing forces in the process. All of that, though, is small potatoes to Adler’s script, since Metalstorm does very little world-building or even character development. Mainly, the film is about Dogen tracking down Jared-Syn, evading Jared-Syn’s son Baal (R. David Smith), so that he can get his girl Dhyana (Kelly Preston) back – the woman he’s fallen head over heels in love with after literally meeting her hours before.

There are films like Exterminators of the Year 3000 (review here) that attempt to mimic Mad Max‘s dystopian road warrior universe, and then there are films like Band’s Metalstorm that take inspiration from the film and then adapt it into a hybrid of other popular films of the time. While the Mad Maxisms are certainly prevalent in the film – like the cars that the apocalyptic survivors drive through the desert – the real crux of Metalstorm is that it’s kind of an ugly amalgamation of a number of different science fiction vehicles, all mashed up messily into a film.

Adler’s script isn’t very good, and that’s a huge problem in a film that has such a small budget to sell its futuristic world. He does little character work with Dogen or Dhyana or even Jared-Syn, who, as an antagonist, is about as boring as they come. Preston does his best to make Jared-Syn into a compelling villain, but when the film allows very little time for him, there’s not much to be done. Ultimately, Jared-Syn feels like a minuscule threat because Metalstorm doesn’t take the time to show why he’s so evil – the audience is forced to take Dogen at his word, and then surmise that since Baal is such a bad guy, his father must be as well.

So while Metalstorm cribs from successful films, it always comes off like a facsimile of them, and that’s not even due to some of the exceptionally poor special effects. The real issue lies in Metalstorm‘s lack of stakes, with no real motivation for Dogen to find Jared-Syn besides his job title and the fact that he’s taken Dhyana captive. That works to an extent, but Band doesn’t do much intercutting between the two subplots; most of the focus remains on Dogen and, later, his excursions with Rhodes (Tim Thomerson) and his interaction with the Cyclopean Hurok (Richard Moll), giving the viewer no suspense because most will probably forget Dhyana’s even in trouble.

Still, I’m selling Metalstorm a little short. It’s fun to see how much Band and Adler take from other, better films, and there’s a modicum of fun to be had when the film really gets rolling. Moll in particular is a selling point, and some of the makeup work on the Cyclopeans does look rather good. However, the final Star Wars-esque chase sequence is particularly egregious, and the laser effects don’t keep the viewer in the throes of the action much either. Metalstorm is hit-and-miss, and its biggest detractor is that it’s too often boring. Still, fans of science fiction-tinged action films from the ’80s will see Metalstorm for what it is: cashing in on a lot of fads while getting some things right in the process.

As I stated in the film review before, Shout! Factory has given fans two ways to watch this film on Blu-Ray: with a regular 2D disc, and the 3D version of the film as well. The new high definition transfer looks rather good, especially in the more colorful scenes like when Dogen travels to a different dimension full of red diffuse lighting. Overall, the presentation looks very good, and it comes in its 2.35:1 widescreen format. The audio also sounds crisp in DTS-HD Master Audio Stereo, and surprisingly the film makes good use of side speakers for its surround sound.

Special features on light on this release, but one makes the whole thing worth it (besides the double-disc 2D/3D, of course): a 40 minute documentary on the making of Metalstorm, complete with professional editing and a sleek presentation. While 40 minutes on this film might seem unnecessary, this is a great watch and really documents the whole process behind the film, from the initial idea to its setup and execution to the rush job on the soundtrack by Albert Band. Personally, I had a lot of fun with this featurette and I hope Scream Factory partners more with Ballyhoo in the future to present some of these great extras.

Also included is a promo and behind-the-scenes still gallery, a theatrical trailer, and a radio spot. The interior of the packaging includes a full-color photo spread. While Metalstorm doesn’t get a ton of extras, what’s included in this package is certainly enough for a film that probably doesn’t – and shouldn’t – have a widespread fan base.