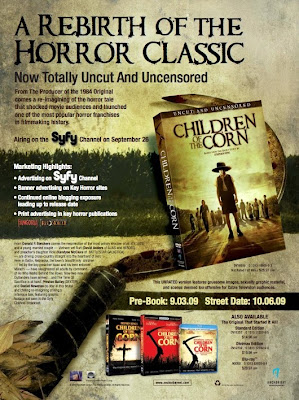 First, I think it would be easiest to start off this review with a list of Children of the Corn’s plot structure, and then explain from there.

2. 30:01 – 1:00:00 – exploration of abandoned Nebraska town (while arguing); fleeting glimpses of killer children in the backgrounds of shots, most of which is coupled with a sharp musical note (sometimes while arguing); seperation of woman from man and the resulting death

3. 1:00:01 – 2:00:00 – Nam man escapes from children in corn fields; children proceed to chase until dark; man attacked by corn monster that we don’t see; finds a clearing with sacrifices, including wife; death of man

These three plot points are basically what make up most of this SyFy feature, with an emphasis on arguing. If it sounds like a poorly plotted, slightly boring and suspense-less film, then I’ve hit the nail on the head with my description.

From the start of the film, we come to find out that our protagonists’ personalities are almost unbearable. Vicki (played by Kandyse McClure) is whiny, weak, and her emotions are practically heightened the amount where you’d think she would die of stress before any child with a scythe can put her out of her misery (and ours). Then again, Burt (David Anders) tries a little too hard to be a macho war veteran, constantly taking charge of situations and demeaning Vicki. It’s no wonder that their marriage is failing; two annoying individuals put together does not make for a lovely relationship.

The whole film, too, is a lesson in ill-conceived emotions. Vicki freaks out from the get-go, and there’s nowhere for her emotions to rise. She’s already at the height of her fear; there’s no climax to her character, only a constant state of panic that makes her the obvious victim. On the other hand, Burt is way too calm for most of the movie; even as his wife is killed, he laughs and challenges the children, which makes for probably one of the most unrealistic and humorous parts of the film.

As you can see above, the plot leaves much to be desired. It may work as a short story, but watching the characters bicker for a half an hour about what to do with a dead body becomes tiresome quickly. There’s barely any suspense generated; much of what people might find “scary” is just created by kids walking behind cars or windows. None of the kids are ominous or intimidating – Burt shows this to be true when he can outsmart hundreds of them in the corn, or when he kills a few by easily ducking an ax and them battering them senseless. Even the leader of the group, Issac (Preston Bailey), is just a wimpy little kid with a good sense for speeches. Malachai (Daniel Newman) is a misguided redhead with a temper and a gravelly voice: big deal. The thrills of the film should come from the feeling that both protagonists are outmatched by a force much greater. But Burt is already a fearless leader, thanks in part to the juxtaposition of Vicki’s weaknesses. One feels as though Burt could single-handedly thwart the children by laying low and then escaping from the corn.

SyFy is coming out with an Unrated cut of the film on DVD October 6th; don’t buy into their hype. There’s nothing in the film that could be considered enough to warrant an Unrated release. The violence is tame, the worst of which being some whispy strands protruding from the eyes. The film is better than your average SyFy Original, but there’s still a reason why this is a made-for-TV movie. 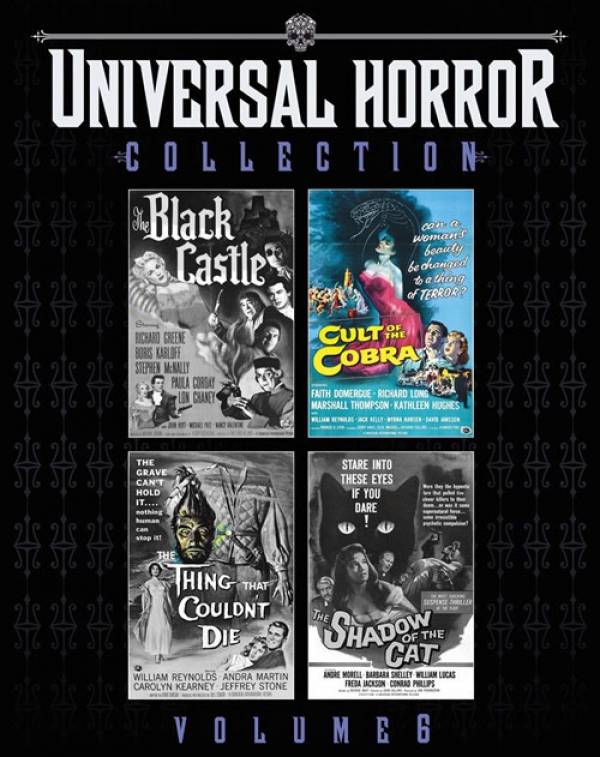