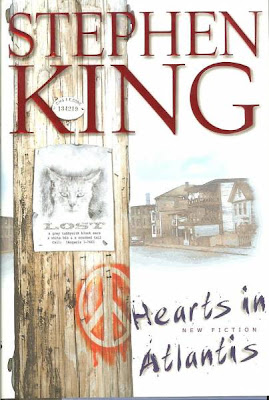 Stephen King tackling the past isn’t necessarily a new thing; he tends to jump back and forth between then and now throughout most of his books, with the mindset seeming to be that we can never really get over the past. But in Hearts in Atlantis, King tackles the 60s and, more specifically, the Vietnam War, an era that, for most Americans who lived through it, holds intense feelings. Whether it be support of the war, contempt for it, or neutrality in the face of it, King tries to come at the topic from all points of view, something that makes the novel stronger and weaker at the same time.

King covers five different areas of the Vietnam War and the years that follow it – we start off before the war with a young boy named Bobby and his adventures with his mentor Ted, move into 1966 with a man in college, Pete, who finds his own stance on the Vietnam War as an oppositional one, jump in time to 1983 and a man who fought in the war who suffers from multiple personalities, in 1990 drop by an old friend who was in the war with his own set of horror stories and personal demons, and finally wrap the whole thing together with another visit to Bobby in 1990 revisiting his past. There’s a lot to discuss and talk about – Hearts in Atlantis is a thick book with even thicker themes and messages, but there’s not much time. I’ll get to the gist of my discussion.

King provides rich detail for each of his characters, crafting suspenseful drama for each that crosses lines with the other narratives but never becomes the same. King’s ability to take on different personae with ease isn’t surprising, but it’s still spectacular enough here to warrant rewarding. Every perspective brings something new to the novel; it’s as though King is working through his own misgivings of the war. How do you think of something that hasn’t really been given a sense of closure? King’s novel attempts to do just that – by coming at it from different angles, will it make the whole thing clearer? The answer is not really, and that is purposefully done. There can be no right answer to a matter as big as the Vietnam War, only opinions. Masterfully crafted, King pits his characters against something bigger than they can handle, where they must wade without anchor towards their fate.

But though King’s characters are complexly created with multiple facets, there’s always that weakness that shows up when switching away from one character to the next – here, that flaw stems from the fact that some of King’s characters are stronger and more relatable than others. Bobby’s story seems like it could stand alone; the characters from Bobby’s childhood all weave into the narratives of the other main characters, Bobby’s encounters with Ted and the low men are more fleshed out, exciting, and intriguing than any of the other tales explored. Switching protagonists disrupted my excitement of the story arc – I almost didn’t want to be taken down the road King was leading me, instead leaning more towards Bobby’s later adventures with the low men. The point I’m trying to make here is that King’s head-hopping may bother some readers because of the close associations they get with one character.

That doesn’t change the fact that Hearts in Atlantis is a stunning domino effect of the Vietnam War, one that leaves the reader feeling lost in a tidal wave of history. I did not live through the 60s; I have no experience of the Vietnam War other than my own knowledge of it through history classes. But I came to accept my participation in the past, an entwining of the reader and the protagonists into one being that King is so good at. Take this ride back in time, revisit horrible moments, find good times in them, remember the bad, but you’ll come out okay. King lets us know that in the end, not all do come out alright. War takes us away, whether it be literal national conflicts or our own personal relationships.

“I can’t remember hurting any more ever in my life than I did then. Hearts are tough, she said, most times hearts don’t break, and I’m sure that’s right… but what about then? What about who we were then? What about hearts in Atlantis?”