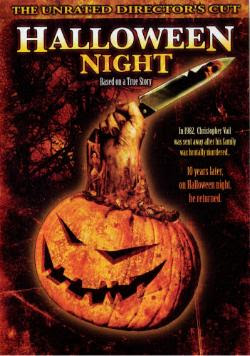 Probably the best place to begin a review of Halloween Night is to talk not about what it doesn’t do well, but what it does do badly. For Halloween Night is one of those beasts where, try as you might, you cannot mine any enjoyment out of the plot, characters, actors, atmosphere, drama, tension, violence, partying, sex, nudity, drugs, humor, scares, suspense, story, emotion… Well, I’ll stop there. It doesn’t even fall under the title of So Bad It’s Good. It’s so bad, it’s just bad.

Oh my, oh my, where to begin. Realizing that Halloween Night is an indie low-budget direct-to-DVD film, probably paid for out of any funds possible does not change my opinion that the script and acting shouldn’t be utter emotionless drivel, which it is. The actors, if you can call them that, seem like they are constantly improvising their lines, which might be a really cool, realistic experience if put in the hands of more talented individuals, but the experience is catastrophic here. There’s no emotion delivered in the lines, and there’s a constant battle between the characters in dialogue because each are struggling to say something when the other isn’t. This results in a lot of interruptions where no one is really saying anything, or they devolve into phrases like, “Dude, this is fucking great dude. It’s gonna be great. Fun shit. Gonna be awesome dude. Man it’ll be off the hook, you just wait and see,” where one immediately realizes that the character is not actually saying anything, just repeating lines we’ve heard him say over and over again in different forms.You can guess that this gets annoying incredibly fast. There’s a difference between “realistic” speech and “unrealistic” speech for sure, but I don’t think anyone is as unable to form a complete sentence or thought in real-time dialogue as these mindless college kids.

If the dialogue was bad, the characterization of the players can’t be much better, and it’s not. We’re left assuming that every one of the kids involved is a total incompetent fool who have nothing better to do than party their nights away. Whereas most victims have some redeeming quality, these guys are not unlikeable but just downright bland and boring. At one point, we’re treated to an ugly, ugly sex scene which concludes with the woman asking the man for his name. Where in this formula are we supposed to find any respect or sense of relatability? I know I certainly don’t.

So Halloween Night treats us to a night of mischief with people I would never actually want to hang out with, who finally kick the bucket in a number of gruesome ways that just emphasize how dumb they are. It’s not fun to watch; the gore and kills are not particularly exceptional; and it barely feels like Halloween Night to begin with. We side most with the killer, because we get more backstory on him than any emotion from the other characters! Even then, his motives are quite fuzzy, since his anger should be bridled more towards people with masks than anyone in particular, as we are led to believe from the opening sequences. Even the motivations behind his mother’s rape and murder don’t make sense. We feel there was a meaning to it, as though her husband paid assassins to come and kill her, but this isn’t cleared up at all.

In the end, we may come to imagine that even the characters of Halloween Night don’t want to be at their party; the actors certainly don’t have much enthusiasm for it. The best parts of this lackluster film come from the violence, but not because of any grotesque appreciation for it – oh no, it’s only because the killer is murdering and, more importantly, shutting up the incorrigible characters and ending the night that we find any enjoyment here. Please, please, please – don’t let the title lull you into thinking you can find entertainment in the film’s Halloween subject matter. Stick with the tried-and-trues of the holiday. Please.

Halloween Night on Rotten Tomatoes (It’s so bad, there’s only one counted review on RT – and it’s rotten!)