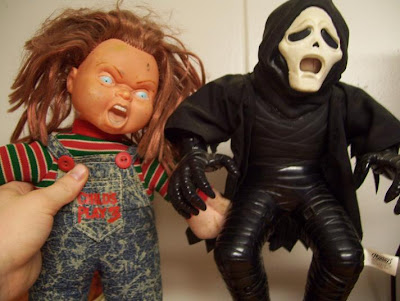 Anybody remember these guys?

As I was looking for things to post about for Halloween the other day, I found both of these toys on the top of one of my bookshelves. I haven’t taken them out in ages, but I felt like this was the perfect opportunity to make mention of them.

First, we have Chucky, an authentic Child’s Play 3 doll that came with the first editions of the film. My dad used to own a movie store, so we always got things like movie posters, promo tapes, and, most important, this Chucky doll. He does have a crack on his cheek, and a couple of markings on his forehead, but that just makes him scarier. Plus, his hair’s a mess and feels like he could make some dreads out of it if he wanted to.

This Chucky used to scare the crap out of me when I was a kid. There would be times when I would have to put him away because I would be scared to wake up and see him looking at me. Other times, when I was in my ghost faze, I would imagine a ghost picking him up in the middle of the night and positioning him somewhere in the room. 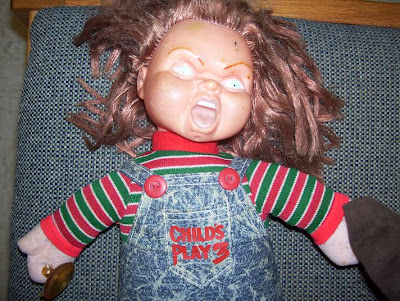 Funny thing is, my aunt has the exact same Chucky doll as well, only her’s is in much better condition. They’re even designed so that you can suction-cup them to the window if you so choose, although mine is missing a suction-cup. 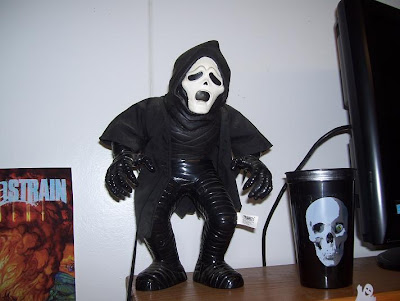 Second, we’ve got Ghostface Stretch Armstrong. This was made by Manley Toys in the ’90s, and they are pretty impossible to find anymore. I can’t seem to find any information on them on the Internet, but you can win one in an auction here. I’m pretty sure they were called Stretch Screamers. 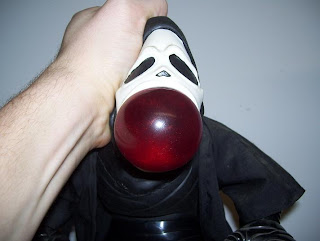 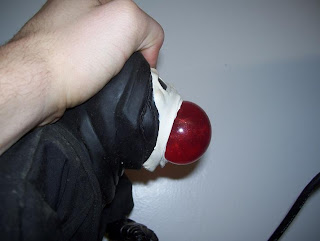 They really do scream, too, although I don’t know if mine works anymore. The batteries died and I don’t have any to put in, but I’m pretty sure it would work. Anyway, when you squeeze Ghostface’s head, a big ball of gore pops out of his mouth. It’s actually pretty sweet, and a nice stress reliever. He’s also filled with beans so you can squeeze his stomach all you want to. His arms don’t really scretch, though. 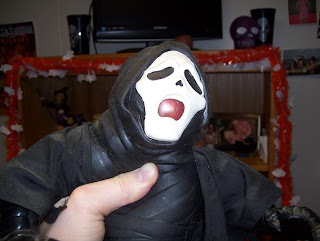 These are two items that I’m actually really proud to have in my collection. They’re hard to find and look really, really cool for Halloween. Anyone else have this or any other Stretch Screamer? I’m really curious to see what others are out there, because info is really hard to find!
0 0 vote
Article Rating
Liked it? Take a second to support Cultsploitation on Patreon!