Movie Review – In My Skin

In My Skin
AKA Dans Ma Peau 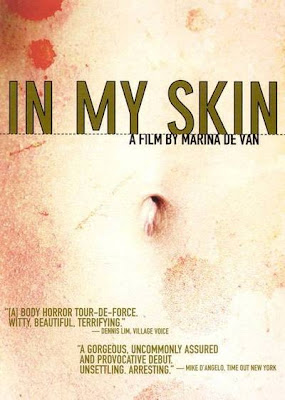 In My Skin is a gruesome foreign film directed, written, and starring Marina de Van as Esther, a truly disturbed young woman obsessed with her leg lesions after sustaining injuries in a fall. Esther is a fairly strange woman before her fall, but after noticing she has cut her leg up, she cannot leave her cuts alone. She constantly picks and plays with them, finally going so far as to actually inflict wounds herself. As her condition worsens, her job and home life also suffer, but Esther cannot end her fascination, until she finally begins eating her own skin and tanning it.

In My Skin begins quite fascinatingly. We meet Esther through a party, where she seems more like a loner than anything else. She cuts herself, but does not realize she has actually been hurt until she sees the blood leaking from her leg. Already, de Van’s character feels strange; she explores things without asking, she keeps to herself, and she can’t feel the pain of cuts. She even seems accustomed to the blood on the floors. De Van sets up a chilling atmosphere through the exposition of Esther – long, drawn-out closeups of her face and her bloody leg create awkward tensions, almost a voyeuristic exploration of the cuts.

As Esther progresses in her delirium, the tension increases tenfold. The film transitions extremely well from natural daily life and the obstacles Esther faces with her obsession of wounds to truly uncomfortable scenes of Esther grotesquely feeling and cutting her skin. De Van allows us to be sucked into Esther’s fascination; much of the time, the audience is also unable to look away from Esther’s experimentation with self-inflicted wounds. It is not so much the violence that is shown as the sounds and faces that de Van makes that create the squirmy feelings within the viewer – the implied pain is worse than actually seeing it, and the long shots of de Van playing with the wounds are enough to send shivers down the spine.

So throughout much of the movie, there’s an uneasiness that pervades the whole film, where one doesn’t know exactly what will happen next. De Van takes us to the edge, having Esther actually eat and preserve her skin in a scene which can only be described as a sort of “binge” of cutting. The tension is nauseating; it’s not a question about what violence will be shown but how far it will go, and de Van realizes this enough to treat us to tantalizing but vague shots of skin destruction. One feels so queasy because of the imagination; we must supply our own pain for Esther, as she is just not right.

But the film ends on a disappointing note, one which refuses to wrap up anything that we have just watched. Unfortunately, it feels as though de Van did not know how to end the film. Instead of resolution, we are treated to a cliffhanger that can never be answered. In my opinion, it’s not a successful conclusion, though. We have watched a woman delve deeper into her psychoses, only to learn that there is no end, no deeper meaning. There isn’t a psychological weight here; we have watched a woman cut herself up expecting something more than what appears at the end to be “just for the fun of it,” and to me that is leaving the film unfinished.

One’s enjoyment here will come from being sucked into the bizarre mental breakdown of Esther. Whether you can get over the lackluster ending or not, In My Skin is still a wonderful film to explore because of its tense pacing and ability to create discomfort within the viewer. It will push you to limits; it makes you curious; but for me, it’s finale did not live up to my expectations that de Van had created throughout the film. It only left me with a conflicting view of the movie, loving the techniques but missing that extra push to make it truly a great piece of horror cinema.

In My Skin on Rotten Tomatoes