My Favorite Halloween Specials #4: “Two Guys, a Girl, and a Psycho Halloween” 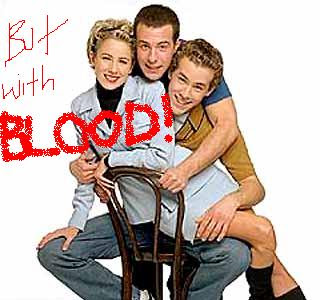 Much along the lines of the first in this series, “And Then There Was Shawn,” Two Guys, a Girl, and a Pizza Place did a Halloween-themed episode based on one of the characters as a killer. In the episode, Berg goes on a killing spree in the pizza place, only at the end of the show we come to find out that there is an evil Berg and a good Berg, and everyone has to decide who is who. It wasn’t an original idea, but it still had the show’s quirky humor (one which was a sitcom favorite for me back then) and had a little bit of violence as well, which made it a definite must for me during Halloween.

Because of 20th Century Fox’s copyright laws, one cannot find any of Two Guys, a Girl, and a Pizza Place‘s episodes online at all! So this episode is, unfortunately, unviewable – but those who have seen it can revel in its Halloween excellence. And the show was actually really good, too, and I urge you to rebel against 20th Century Fox and their stupid infringement violations.