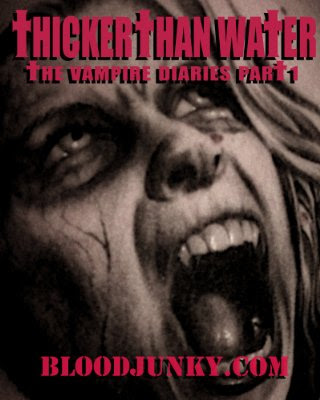 Thicker Than Water, part one of Phil Messerer‘s dark vampire comedy trilogy, has recently been hitting up the indie circuit, to much praise. It’s no surprise, really; Messerer’s wacky characters and their attempts at keeping alive their vampire relative showcase a knowledge of horror and comedy that is surprising, fun, and creepy at the same time.

You see, something just isn’t right with Helen (Devon Bailey) after her sister Lara (Eilis Cahill) accidentally casts a wicked spell on her in the hopes she can cause mild discomfort. Instead, the spell drains Helen of all of her blood through a fountainous nosebleed and kills her, with help from a negligent doctor of course. But Helen doesn’t stay dead; she comes back on a stormy night covered in blood, wearing her body bag, crying of how she drank a man’s blood. Their smart brother Raymond (Michael Strelow) analyzes Helen’s blood and determines she is in fact a vampire who needs blood for sustenance. So the family starts killing off tourists one by one, Helen drinking their blood only when her hunger totally takes over her faculties.

Though the story seems pretty linear and frail, Messerer keeps it interesting through his clever depictions of the characters and their quirky personalities. A dinner scene involving the whole family comes to mind from the beginning of the movie; it’s long and drawn out, and has nothing to do with vampires, but it plants the seed in the audience’s mind of who the characters are, and it gets us identifying with them. In true comedic fashion, Messerer has created very distinct personalities between characters that always clash, mostly in dynamically mundane ways that help bring out the irony of the plot.

But it’s not all comedy here as the plot tends to drop its jokey leanings and adhere towards a stricter horror atmosphere after Helen dies. In a scene that nearly scared the bejesus out of me, Helen comes back from the dead, showing up at the family’s door covered in blood from head to toe and draped in her own body bag. There is something sinister about Bailey’s presence here; maybe it’s the fact that I did not expect Helen to come back from the grave so soon, or in so much displeasure; maybe it’s the little prop of the white body bag splattered with blood that gets me, the sentiment in my mind that what is inside that body bag should stay dead, because that’s why it’s put there in the first place. Either way, the uncanny way that Helen is presented – blood dripping from her eyes, her mouth a ragged hole full of the plasma, her total loss of control as a human being – is enough to send shivers down anyone’s spine, horror comedy or not.

It’s this amalgam of horror and comedy, comedy and horror, that keeps the viewer intrigued throughout. To be honest, not too much happens in the plot that we can’t already immediately write for ourselves in our heads. Lara as a protagonist and narrator seems almost unnecessary as well, as the audience can piece together the characters’ traits themselves through the direction and script. And the movie can run a little long, focusing on details that may have been best left on the cutting room floor. Yet the movie still succeeds, a mish-mash of bleak vampire films of old and Shaun of the Dead-style screenwriting that holds the viewer rapt. This is, of course, not to mention the grotesqueries of special effects artist Randall Leddy that are over-the-top yet fantastic. Or the vintage filming that vaguely reminds of films like Nosferatu or the classic Dracula. I can’t put my finger on it, but the low production gives an eerie cast to all of the scenes that is striking.

Unfortunately, Thicker Than Water is part of a trilogy, and we’re left with a cliffhanger that may not be resolved for a while. As for me, though, I’ll be on the lookout for part 2 of this surprisingly good series, and if you haven’t already been exposed to Messerer’s brand of horror funnies, you best be checking his website, Blood Junky, for all Vampire Diaries news.