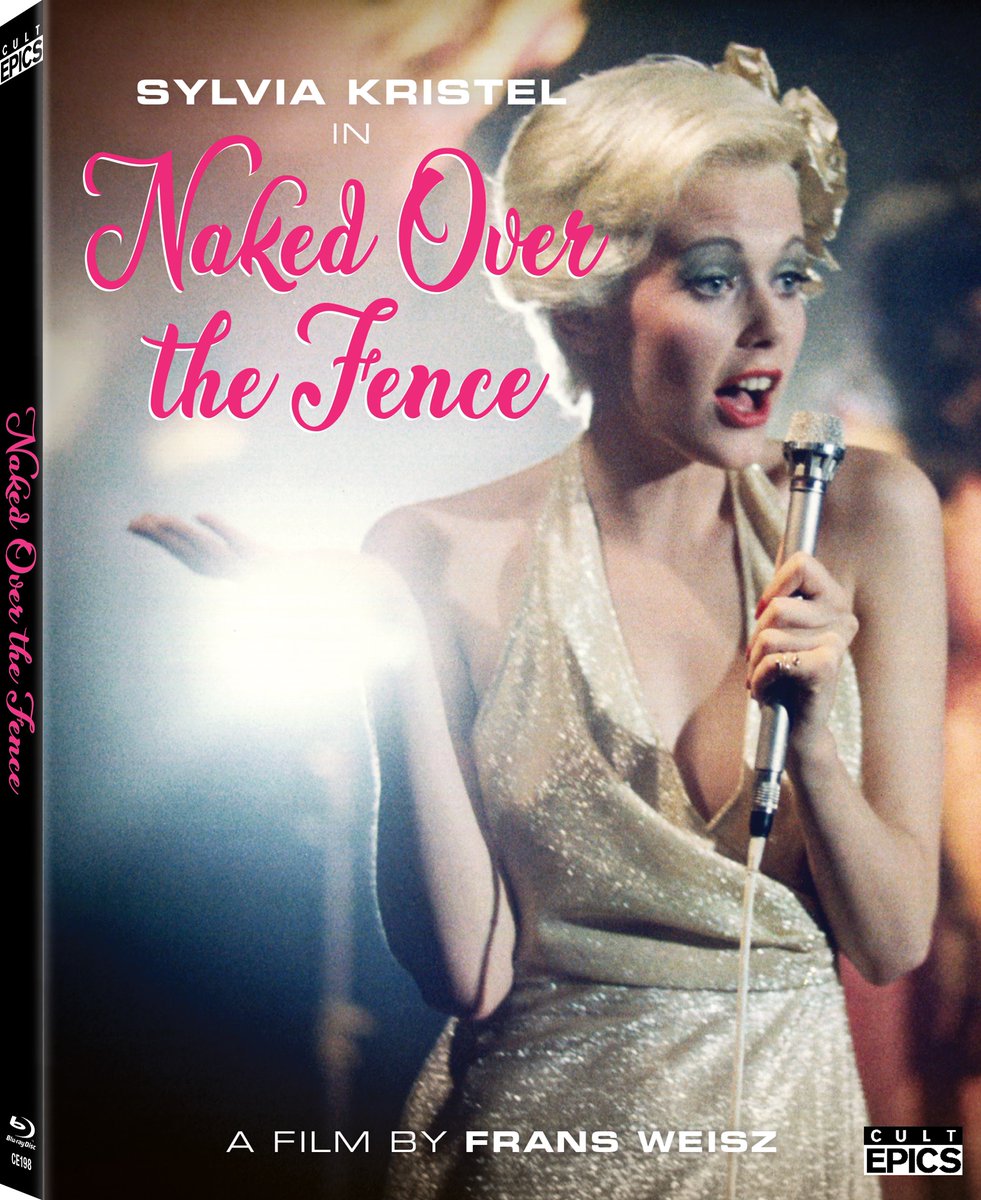 A sarcastic thriller without a lot of thrills

Naked Over the Fence is Frans Weisz’s adaptation of Rinus Ferdinandusse’s novel of the same name; one in a series of the author’s “sarcastic thrillers,” the basic premise of many of these types of novels was to put unlikely protagonists into a predicament involving crime and murder, particularly involving the character Rick Lemming. Unfortunately, none of Rick’s other exploits made it to screen, but Ferdinandusse co-writes this screenplay with Rob du Mee, following the storyline of his novel; Rick (here played by Rijk de Gooyer, a Weisz favorite) is taken out of his natural habitat – owning an arcade and playing with his pigeons – after his karate master friend Ed (Jon Bluming) gets involved in an unsavory pornagraphic film with his new celebrity girlfriend Lilly (Sylvia Kristel). Rounding out the main cast is Jennifer Willems as Penny, a schoolteacher and love interest for Rijk who also happens to be somewhat trained in karate (a surprising amount of karate in Holland, I must admit!).

Being a sarcastic thriller, Naked Over the Fence has a good amount of lightheartedness and humor to it that wouldn’t be out of place in something like Columbo; Rick is a pretty big smartass, and he provides a lot of the “sarcastic” element at play. The setup, too, about an illicit pornographic film fluctuates back and forth from seriousness (a man murdered and perched on a wire) to silliness (climactic karate battle during the conclusion). However, this often gives the film an odd tonal shift that doesn’t work all that well, with Weisz never truly finding a middle ground between the two.

Likewise, the overall murder plot is far too generic and uninteresting. There’s never clear motivation from any of the main antagonists, and Naked Over the Fence is slow to get moving; it takes about 40 minutes before the main crux of the storyline appears, and by that point the film has already narrowed down its suspects quite a bit. Unfortunately, what at first seems like a sexy crime caper devolves into a rather lackluster mystery.

With that said, there are some merits here. De Gooyer and Bluming make a great unlikely duo (and tag team), and Ruud Bos contributes a great soundtrack that fits somewhere into the jazz/funk/soul genre. Kristel is good as always, but she’s actually given very little to do besides perform a song that is shockingly both an earworm and ear-grating (you’ll know when you hear it).

Still, Naked Over the Fence is hard to recommend. It doesn’t do its murder mystery all that well, it’s significantly less explicit than its title and artwork suggests, and rarely does it energize itself from a slow stupor. This one will probably only appeal to hardcore Kristel fans or those with an appreciation for mediocre crime drama.

Cult Epics has released Naked Over the Fence on Blu-ray continuing its line of Sylvia Kristel films in HD; here the film gets a new 4K transfer and restoration from the original camera negative. Overall, the film appears crisp and clear with just a smattering of damage and burns here and there. In comparison to other Kristel films and Dutch classics Cult Epics has released, this looks quite similar; there’s a tendency for some blown-out highlights in the film itself, but it features relatively good detail and a minimal grain presence. Colors tend to hue yellow, and occasionally there is a noticeable alteration in the grading in a few particular shots; also of note is some poor delineation in some of the few darker scenes the film has. Other than that, video quality is strong and quite consistent with other releases of the same ilk.

Audio is presented with both a DTS-HD Master Audio 2.0 mono Dutch track and another LPCM 2.0 mono Dutch offering. For most listeners, there isn’t really much of a difference between the two, and if you review our included Spek scans, you’ll note that their spectrograms are also exactly the same, which is expected. The sound is surprisingly robust for a mono track, including a strong low end that highlights the funk tracks and Kristel’s “Hey, A Letter Came Today” song. Dialogue is consistent and voluminous. English subtitles are standardly included.

Extra features are mostly older offerings collected for this Blu-ray, but Cult Epics does provide a new audio commentary from Frans Weisz biographer Harry Hosman. Hosman offers some interesting information about the Dutch locales and actors, but at times the commentary devolves into Hosman narrating events happening on-screen. As for the older features, we have a 15-minute behind the scenes look at Kristel shooting the film, particularly during her live performance; a 2014 radio interview with Weisz, who sort of side-steps talk about Naked Over the Fence and doesn’t seem particularly enamored with the film; a 2015 orchestral performance of Ruud Bos’ soundtrack; a promotional gallery of artwork; and a trailer from the film, along with other Cult Epics releases.

As for the physical release, Cult Epics includes a slipcover of alternate artwork, reversible cover artwork, and a CD soundtrack by Ruud Bos. These are great additions to the overall package.

Naked Over the Fence is a hard sell, and I imagine it appealing to a limited demographic. However, for that demographic Cult Epics has provided a great Blu-ray release with a very good new transfer and a number of collected extras, along with a CD soundtrack that gives even stronger value to this physical edition. 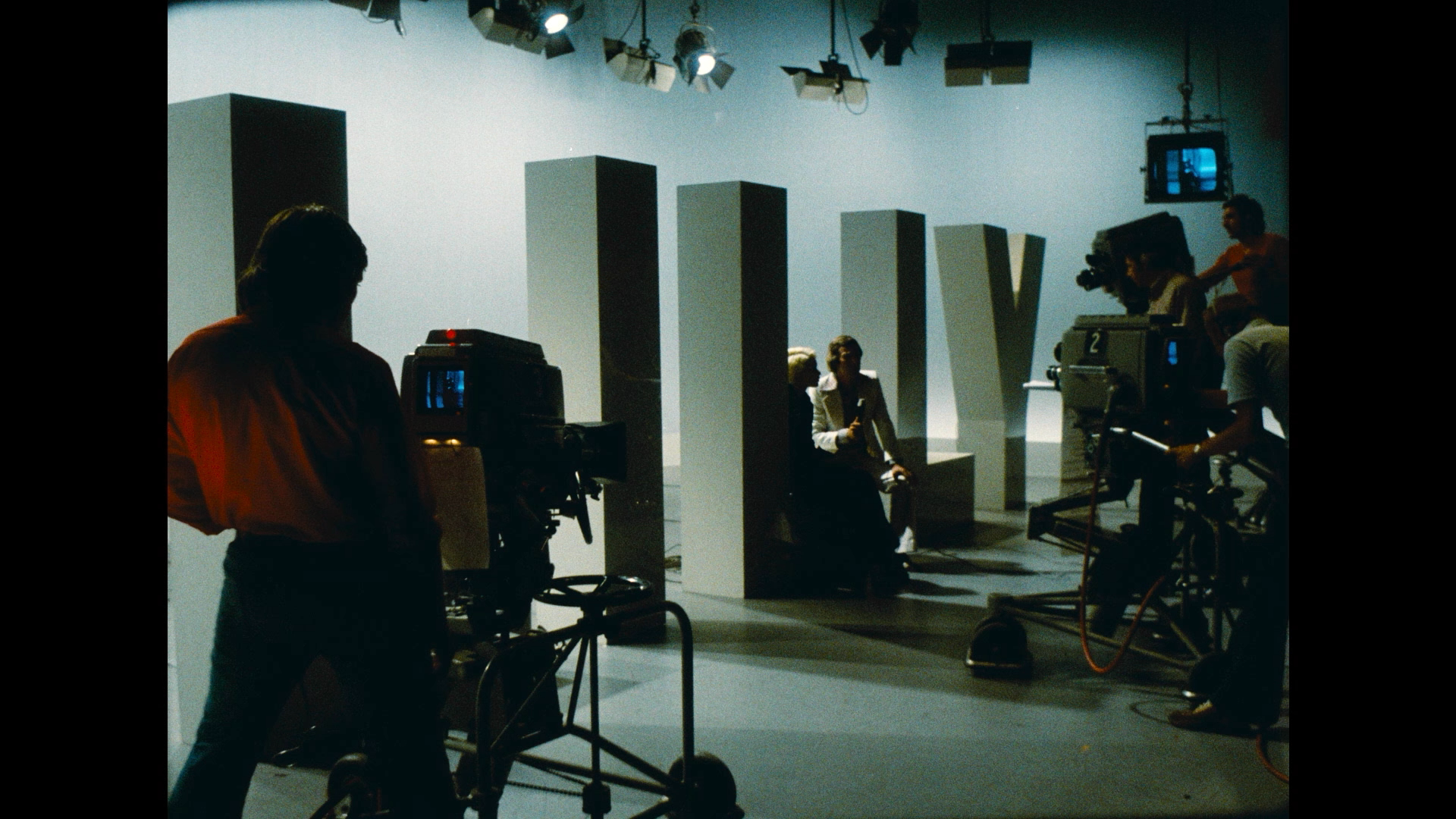 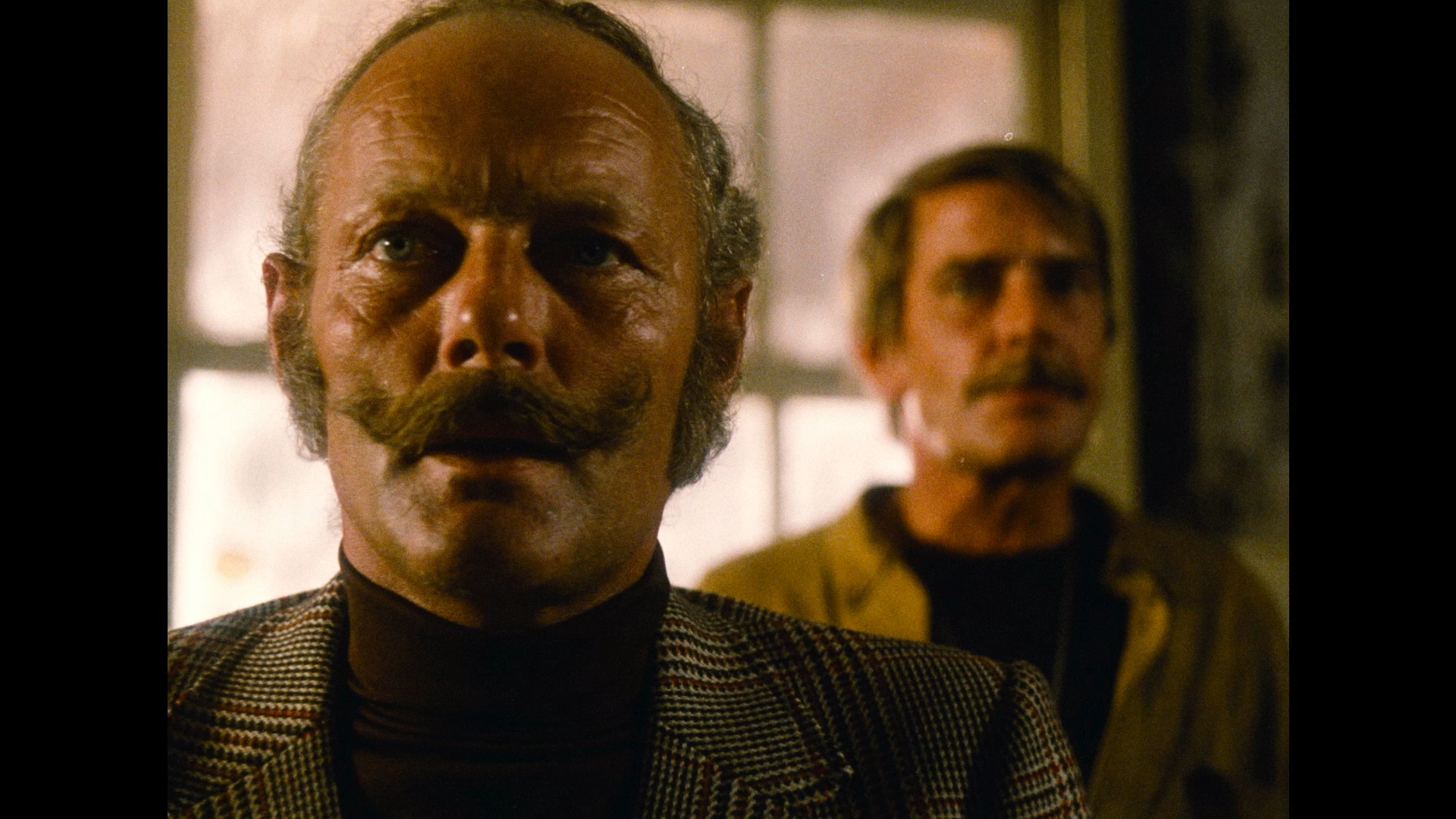 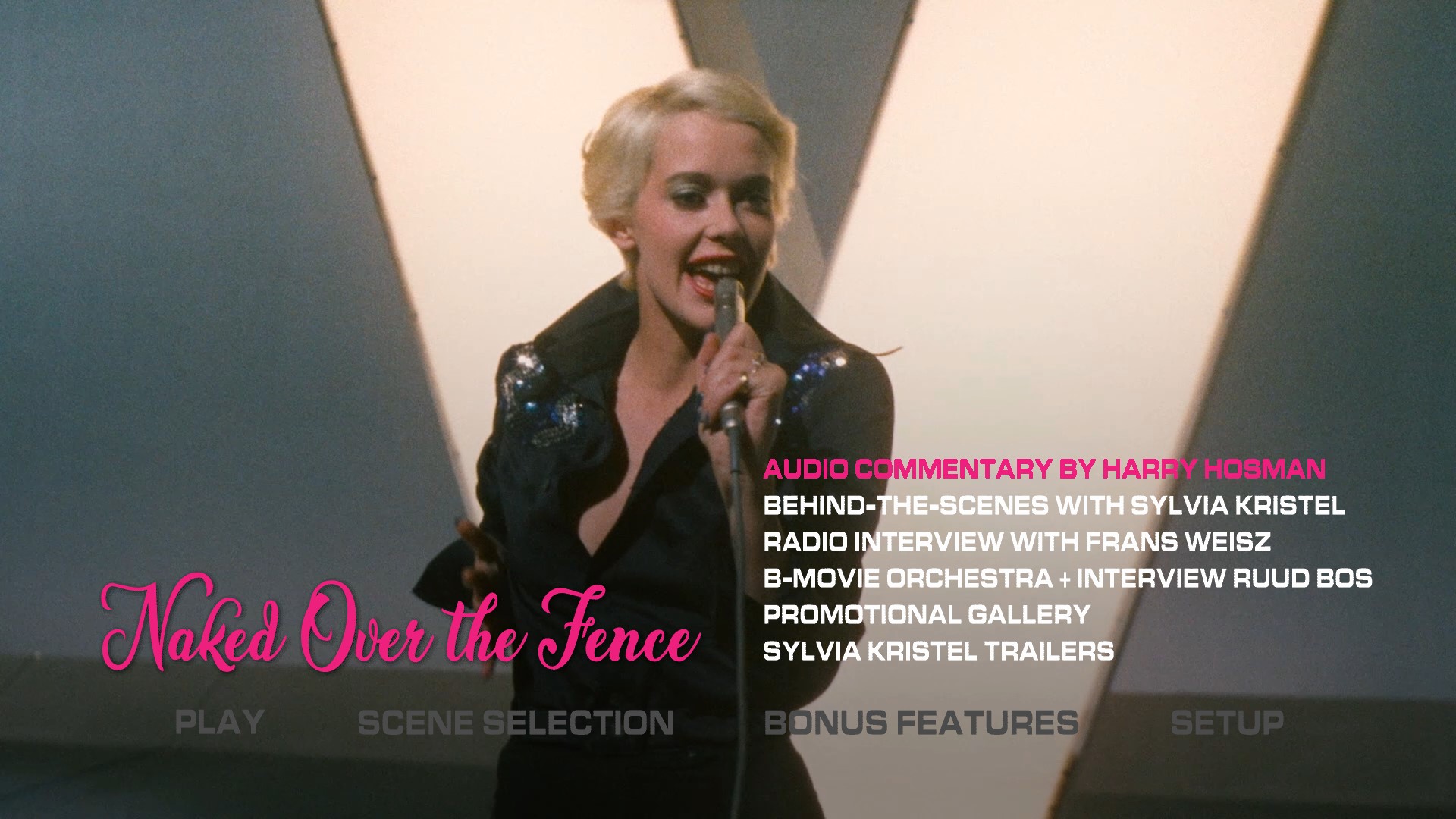 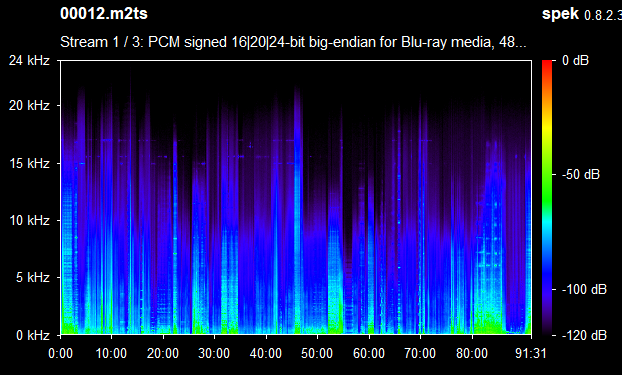 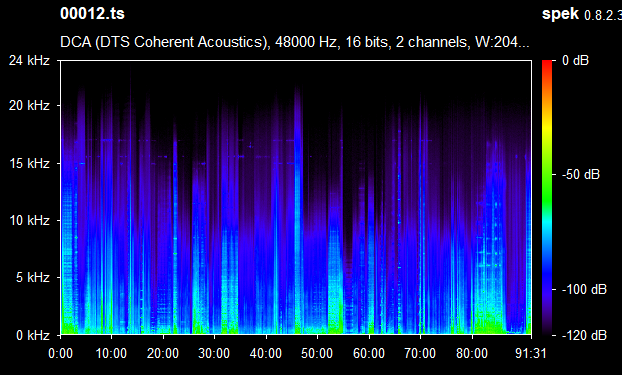 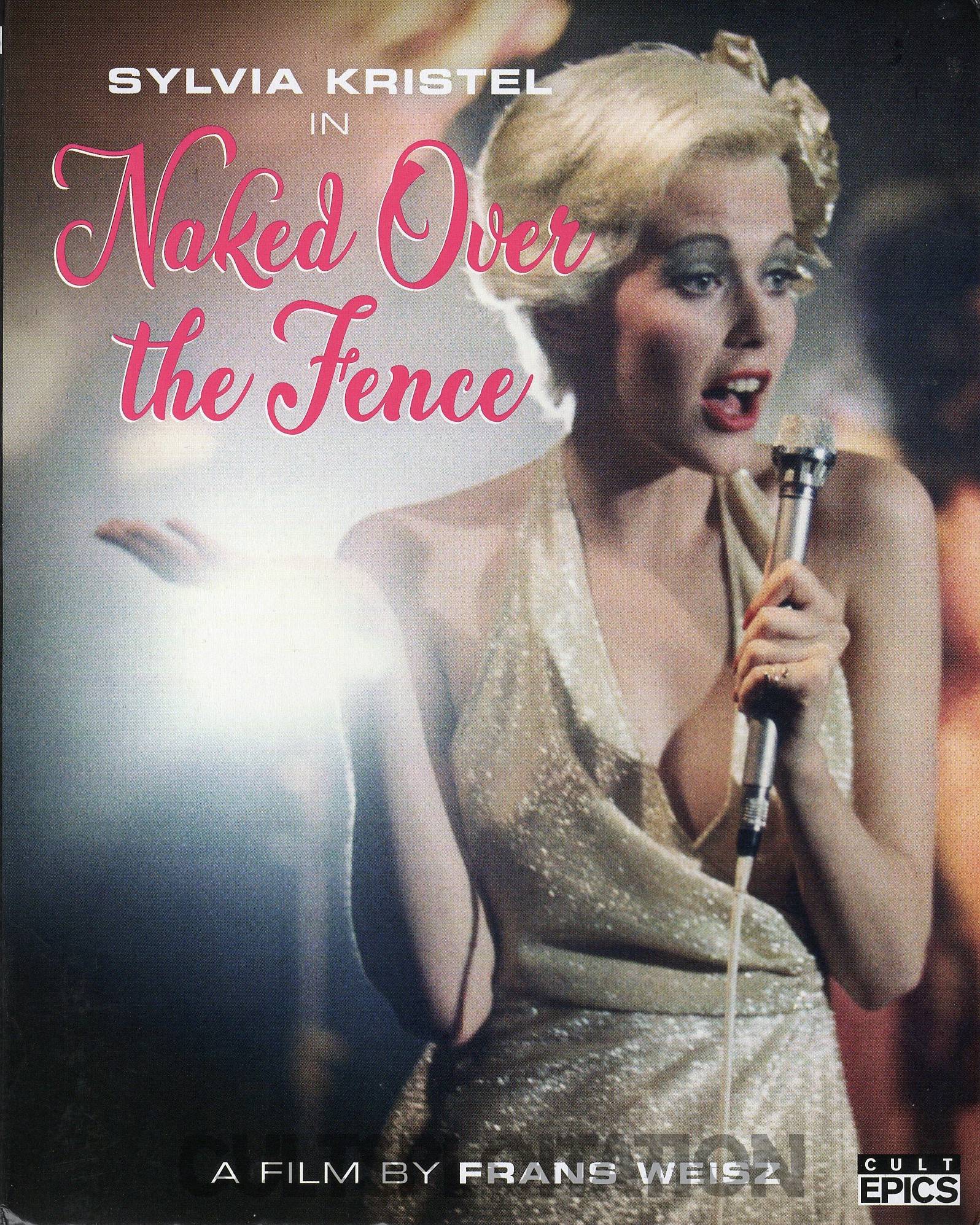 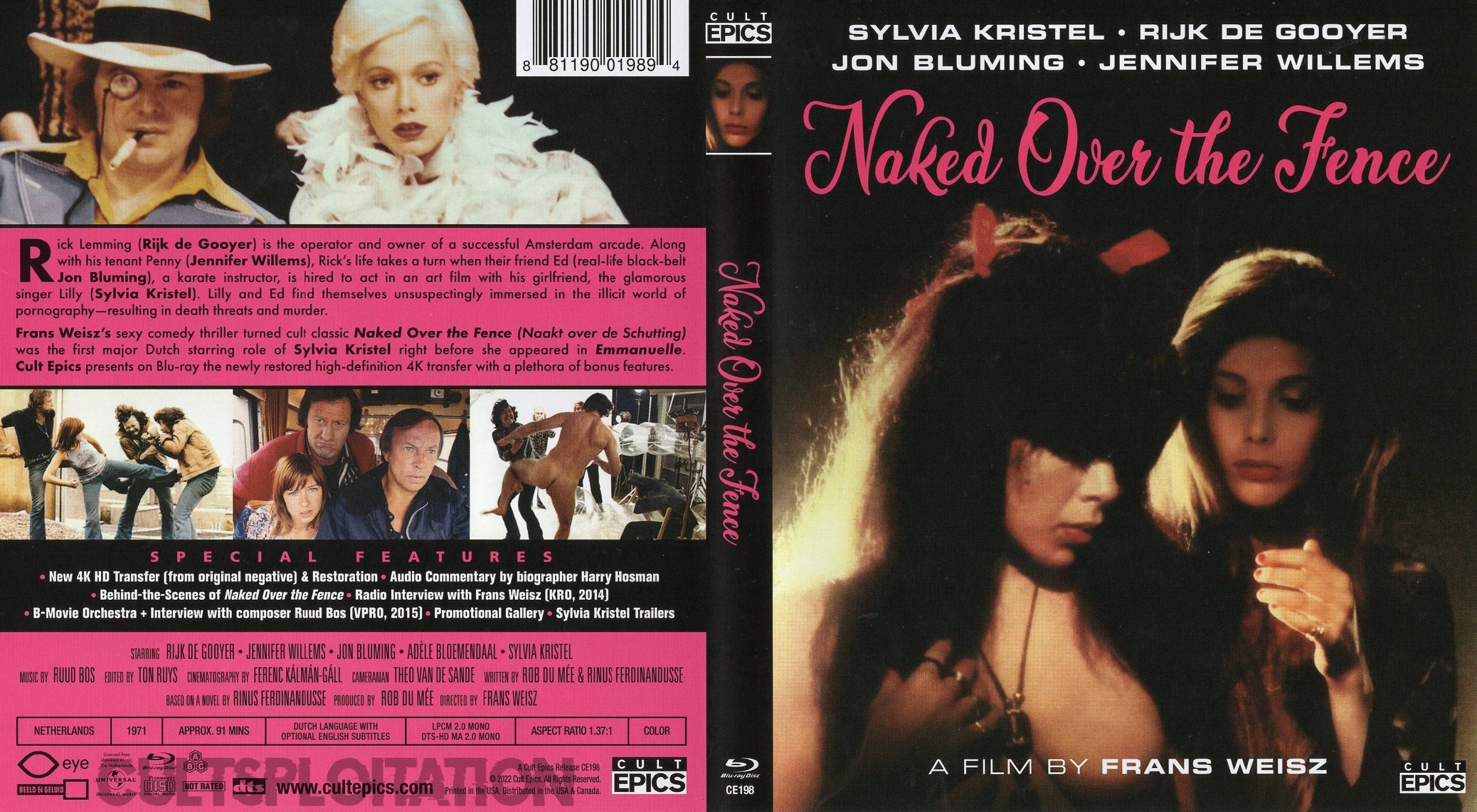 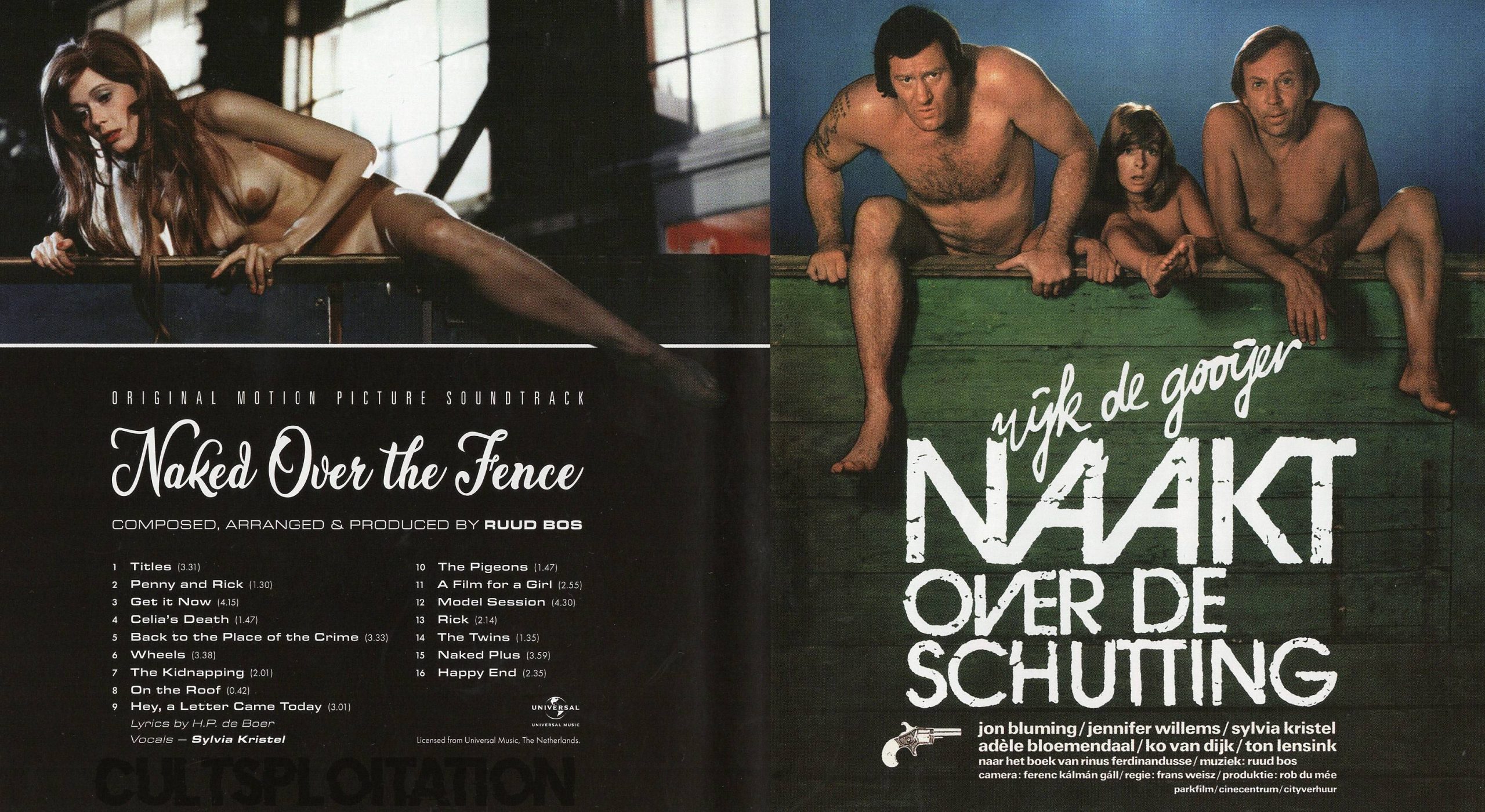 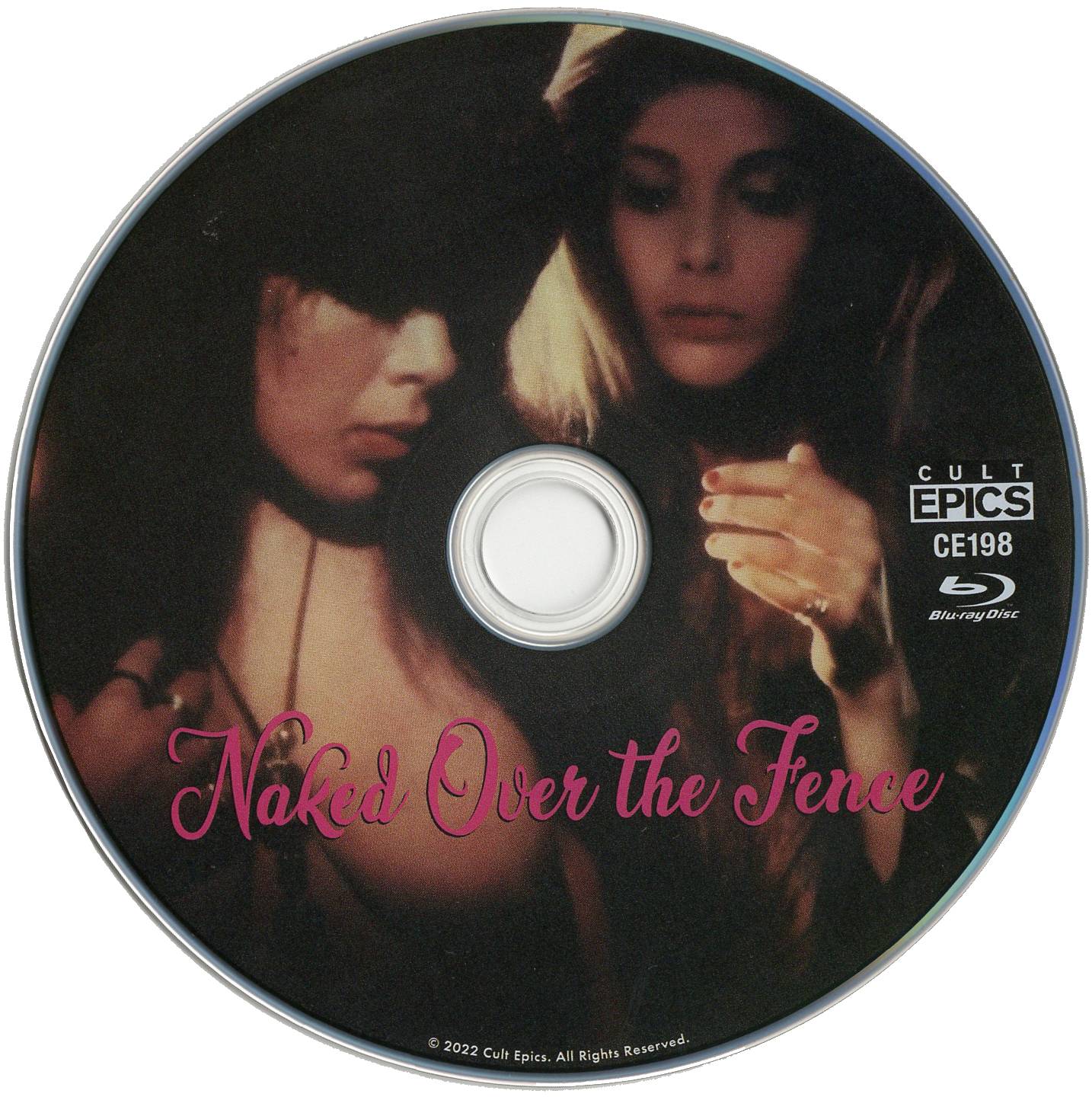 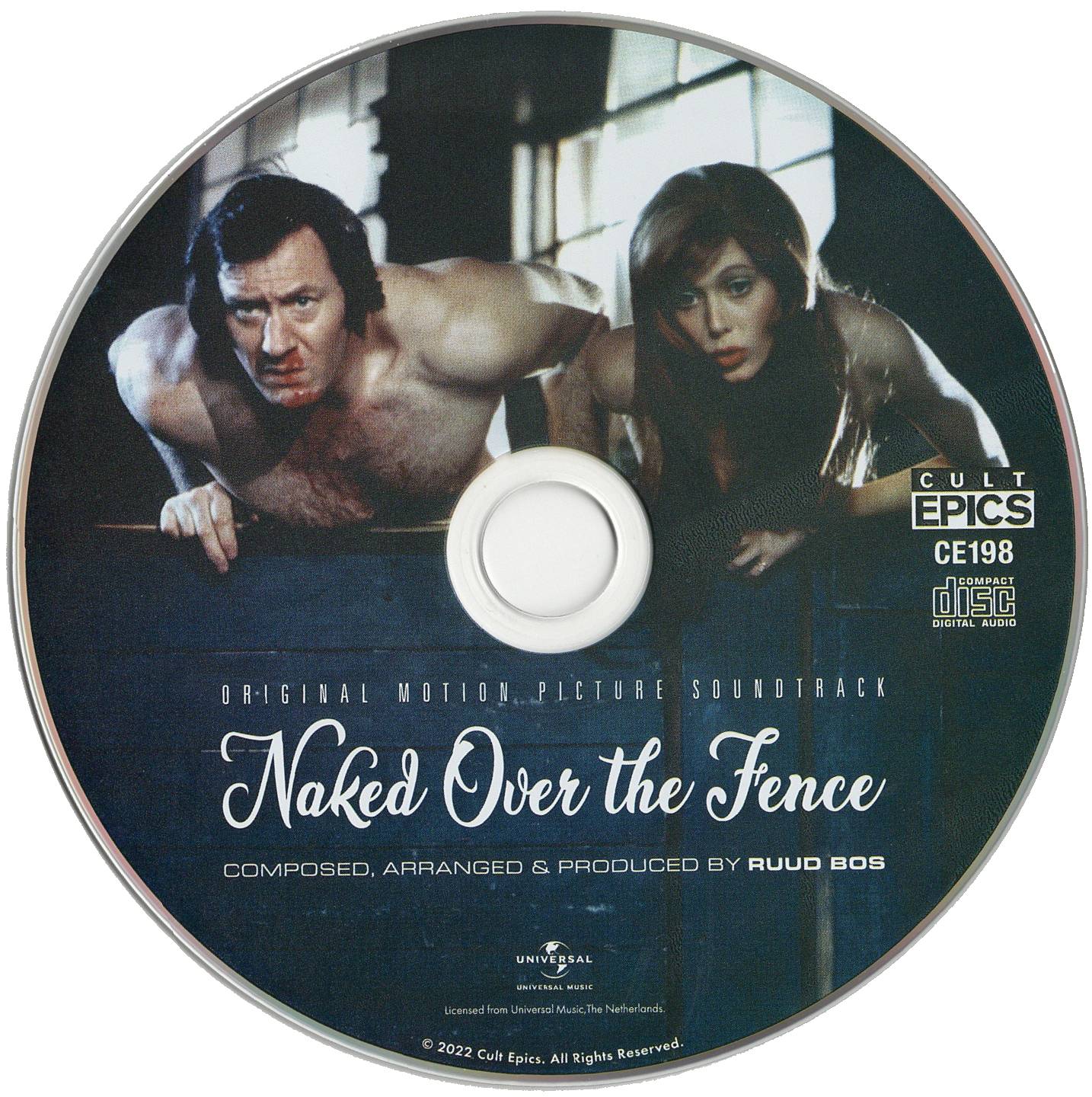