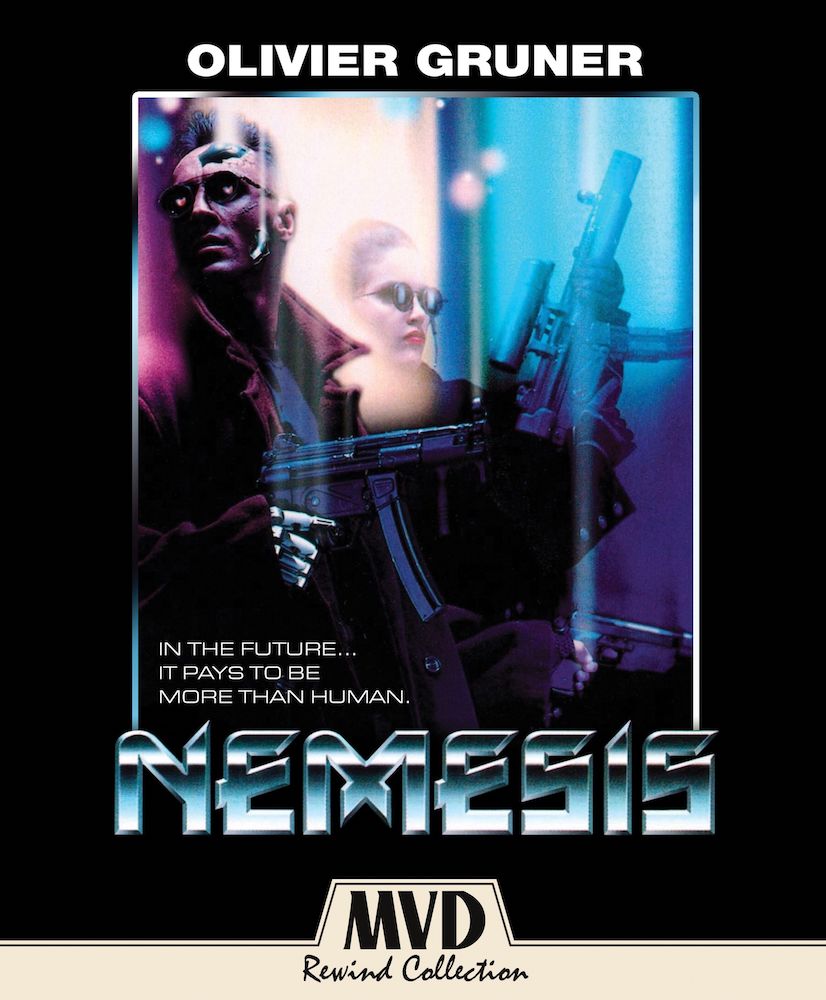 There are dull moments in Nemesis, but the absurdity of the plot and the action make the rest of the film worth checking out. MVD Rewind serves up a fantastic Blu-ray.
Film
Blu-ray
4
Buy
Amazon

You ever have that movie you constantly saw sitting on rental shelves, the cover calling to you, but for some reason or another you never get around to renting it? (Of course, I’m assuming you had rental stores and went to them.) Nemesis is one of those movies with a cool cover, yet I never got around to watching it. “Why?” is the ultimate question because it’s a movie I would have gone gaga over as a kid. When I was given the opportunity to review the Nemesis Blu-ray from MVD Entertainment, I still delayed myself from watching it! However, that all changed after I finally, finally, ripped the shrink-wrap off my review copy, popped it in and hoped that it was worth the super long wait.

In the far future of 2027, where people wear round sunglasses and shoulder-padded trench coats, a war between humans and cyborgs is waging. Alex (Olivier Gruner,) an LAPD cop and walking hypocrite, is tasked with taking down rogue cyborgs, who he deems are terrorists. Oddly enough, Alex is also mostly machine, but the lines are blurred in his eyes. (I mean, he is nearly 85% human, so that shouldn’t count against him.) Alex is so dedicated to his profession, he turns down a blow job from a sexy sexbot, and instead gives her a blow job, straight to the head with his futuristic gun (‘How to make a futuristic gun’ – add lots of scopes and attachments).

Alex meets his match, though, and is partially destroyed and needs to be rebuilt RoboCop style. (I assume he is now 62% human.) Months pass before he is fully healed, but once he is up and running, he tracks down his would-be killer and gets some payback. However, what’s a burnt-out cop to do when his revenge quest is completed? Why, you get into selling black market shit, of course! Turns out, though, Alex sucks at this, since all his clients end up being murdered, mainly by Alex’s hands. Because of this grisly trail he leaves behind him wherever he goes, the LAPD can track him down, thanks to Tommy Jarvis himself, Thom Mathews, and they end up capturing him alive.

They need Alex to track down his former lover/android, Jared (Marjorie Monaghan), who has stolen some documents and is going to sell them to the enemy. Alex is reluctant to help, but his boss, Farnsworth (played by Dollman Tim Thomerson who is having a blast in this movie), informs Alex that while he was under, they did a bit of surgery and implanted a bomb in his chest. The implanted bomb will explode in three days unless he agrees to help. Alex agrees to help.

Alex gets hot on the trail of Jared, but his journey is constantly being interrupted by character actors that make you go “hey, that guy was so and so in that Stallone/ Schwarzenegger/Van Damme film!” Also showing up in a quick cameo is a young Thomas Jane, whose role is boiled down to sweating while naked, and having sex with a big-breasted sexpot (Deborah Shelton). Said sexpot is Julian, Jared’s right-hand woman who needs to get to Alex to show him that not everything is as it seems. (Fun note, her helper is none other than Vincent Klyn, who played Fender in that other Albert Pyun-directed flick Cyborg).

When Alex finally meets up with Jared, he starts to see the truth, even if we the audience aren’t quite there yet. Seriously, I’m not entirely sure what the plot of this movie was about. (Look, I know cyborgs and humans hate each other, and Alex keeps changing his damn hairstyle, and the information that Jared has will expose a plot that, I guess, is about overthrowing humanity and having cyborgs rule all? However, other cyborgs are trying to stop this? I think? I have no freaking clue!) Anyway, we finally get to the inevitable big showdown, and Nemesis couldn’t finish things off without ripping off another movie, Terminator. Man, this movie is mostly “homages” of better films.

I don’t want you, my Reliable Readers, to think I didn’t like Nemesis. I genuinely did enjoy it quite a bit, even if there are moments where the action stops dead in its tracks, and we must watch people try to act. However, the dull moments are dominated by some fun action, and gnarly special effects. It may not be as amazing as Pyun’s Cyborg, but Nemesis is going to impress the people that got a kick out of that flick. It must have done well enough when it came out, as they are already on number 5 in the series!

I have yet to check out the director’s cut of Nemesis, titled Nemesis 2.0, but that can be remedied quickly as the Blu-ray release from MVD includes not only that DC cut, but also a Japanese Extended Cut on the included DVD. As for the differences between the versions, you can find out more at movie-censorship.com.

Also included on the DVD side of the release are features that were included on past releases. As for the Blu-ray, it offers the original theatrical cut (although, I believe this cut tacked on some dialogue at the end, which was not featured in the original theatrical release) in two different aspect ratios (more on that later), two new interviews, trailers, and an audio commentary with director Albert Pyun that plays over the Nemesis 2.0 cut (in standard definition.)

When I first popped in the Blu-ray, it presented me with a choice of watching the film in 1.78:1 or 2.35:1. The default option was the 2.35:1, so I started watching the film that way; however, I felt the framing of the film seemed to be claustrophobic. Switching over to the 1.78:1 afforded the picture some breathing room. If you’re wondering which version is closer to the theatrical release, it would be the 1.78:1 ratio, as the cinema release was 1.85:1. Oddly enough, the 2.35:1 is the director’s preferred aspect.

As for the transfers between the two aspect ratios, they seem to be using the same master, but the noise is a bit more noticeable on the 2.35:1 ratio, which is odd as you would think that the two would look the same. The 1.78:1 still has some noise, but it isn’t as pronounced as the other ratio. Nevertheless, both transfers look great and neither will ruin your viewing experience. I’ve included some screenshots below so you can see the difference in framing. Audio options on the Blu-ray are a Dolby 5.1 track, an LPCM 2.0 track, a French 2.0 track, and finally a German 2.0 track. The 5.1 doesn’t use much of the surround sound space, so I opted to switch over to the 2.0 track and was not disappointed.

Much like the movie Cyborg, I believe over time my enjoyment of Nemesis will keep growing. My initial watch was never going to live up to the lofty expectations I built up over the many years I kept putting off watching the movie. Nevertheless, it was still ended up being a blast. The MVD Rewind Blu-ray is an amazing release worth owning.

For more screenshots, be sure to check out our extensive Nemesis Blu-ray Gallery.