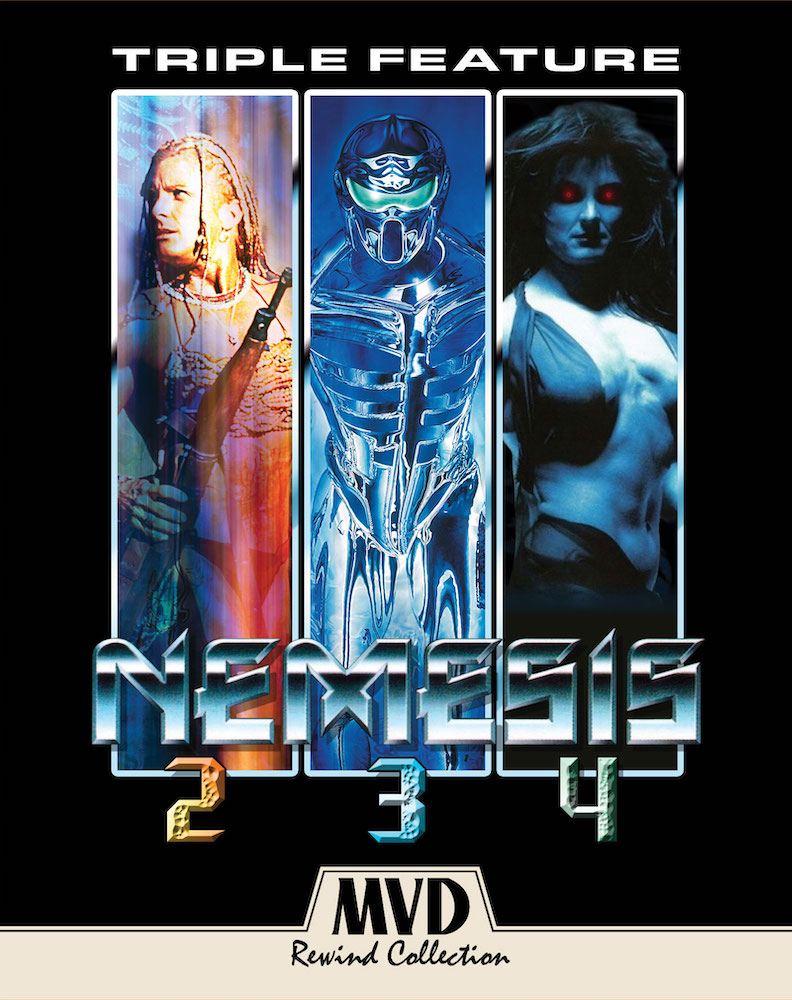 The first film didn't need a bunch of sequels, and it didn't need terrible ones. However, for those fans out there, the MVD Rewind is a cheap way of getting your hands on them.
Nemesis 2
Nemesis 3
Nemesis 4
Blu-ray
3
Buy
Amazon

When you’re holding the latest Blu-ray release of the Nemesis Sequel trilogy in your hands, you have to ask yourself why. Why did a film that was fun, but not exceptional, need three sequels? Sure, you could probably make a sequel to any story if you thought hard and long enough on it, but I’m thinking in the case of these sequels, the thought process wasn’t overly long or arduous. Boiling down the stories for these movies shows you that 2 and 3 could have easily been cut into one movie, and 4 shouldn’t exist.

Nemesis 2 starts in the year 2027, telling us that the events of the first movie were pointless and Alex Rain failed. We then jump even further into the future, where humanity has one last hope of fighting the cyborgs. They have manipulated a human’s DNA into a faster, stronger killing machine. The doctors inject the serum into a woman who will give birth to our last hope. The woman eventually gives birth to a baby girl and is sent back to the year 1980 in South Africa. The baby is left with a tribe and we jump forward 20 years where a bounty hunter is sent back to hunt down the extra-special human, now known as Alex (Sue Price in her debut role). We finally land on the title card Present Day, which leaves you completely clueless as to what year it is anymore.

If the first Nemesis was a rip-off of Terminator, Nemesis 2: Nebula is a rip-off of Predator. Sure, the setting is different, but the bounty hunter, whose appearance is blurred by camouflage, is a direct rip on the titular creature from those much better films. Nevertheless, I am willing to forgive the film if everything else is enjoyable, but here is the kicker: this film is a drag to get through. We are forced to watch Sue Price run around for an hour and a half, with other actors chewing scenery. The plot plods along, maybe throwing in a cool scene or two (the stunt scene involving the bounty hunter on fire and Sue using a human shield as she falls backwards firing her weapon was pretty sweet). Unfortunately, that scene lands near the end of the film, meaning we are forced to watch every other boring, painful scene.

Nemesis 2: Nebula is a sequel that makes you want to watch the first film on repeat forever. Of course, this statement only works if you haven’t seen the next two in the series. If you have, then Nemesis 2 is a gem compared to the blazing dumpster fire overflowing with excrement we get when watching the next ones.

Nemesis 3: Time Lapse picks up after the lacklustre events of the second film, and uses an unhealthy amount of unused footage from the second movie to “tell a story.” Alex wakes up in the middle of the desert, suffering from a bad case of amnesia (if only we could forget the last film as well). Returning for the third time is director Albert Pyun, who decides that viewers would love to watch Sue Price remember past events while a really loud sound effect blares through your speakers (like fingernails on a chalkboard). As my toes are curling, we watch Alex wander the desert, run into returning actor from the first Nemesis, Tim Thomerson, who had the potential to raise the movie above the sewage water level it’s currently floating at but is sadly wasted.

In an odd decision, we are thrilled to see a movie that serves up plot threads that lead nowhere and a tiny bit of action that fails to impress. The ending stumbles on its last legs towards you but ends up not explaining anything. The film fails on so many levels, you’ll feel like you could have done something more with your life. Go outside for a walk, cook a meal, tend a garden, chop off your toes and then shove them up your butt. Anything would be more enjoyable than suffering through this festering poop parade.

As the pain in your head builds to a crescendo, we finally get to the last film in the series (we aren’t counting the new one that will terrorize people soon). I have to give props to Albert Pyun, as he somehow manages to create a sequel that makes the last one seem like a masterpiece. Nemesis 4: Cry of Angels is supposed to be a continuation of the last two films, but we don’t get any answers from the questions that were left dangling in the third movie. Oh no, instead we get to see Sue Price nude for a good 95% of the film. She kills naked, she has overly long discussions naked, and she ponders life naked.

The scenes that play out in front of your grimaced face has Sue Price back as Alex, now a bounty hunter for hire (what happened to her saving the human race?). She accidentally kills the wrong target and bounty hunters are sent to kill her. Instead of seeing some action, we are subjected to lengthy dialogue scenes that go on and on and on. Nemesis 4 is like the bastard arthouse sibling of the series. Hey, at least we get to see Andrew Divoff talking straight into the camera for a bit. And if that doesn’t tickle your pickle, you have the overabundant, super muscular Sue Price nudity to gawk at. That’s something, right?

The Nemesis sequels have seen past Blu-rays already, and if you were expecting this latest release from MVD Rewind to offer a better transfer, you’ll be disappointed. MVD’s release offers the same transfer from past releases and results are a mixed bag. Nemesis 2 comes out fairing the best in regards to any compression issue, but it still isn’t going to win any awards. Nemesis 3 and 4 are both looking fairly awful, with a lot of compression problems cropping up. Seeing how all of these releases have looked the same, I’m not going to fault the MVD Rewind release. It’s nice to have them available in North America, and honestly, the movies aren’t worthy enough to spend a bunch of money on new transfers. Nemesis 2 and 3 are framed in 1.78:1 aspect, while 4 is framed in a 2.20:1 aspect ratio. Audio provided for each film is English language LPCM 2.0 Stereo track. I read that a past Nemesis 2 release didn’t have subtitles for the non-English speaking parts, but you’ll be happy to hear that they are included on this release.

Something that does make MVD Rewind stand out is, of course, the packaging details for those who love the retro look, with the fake stickers and scuffed up slipcovers. You also get a nice poster of the slipcover included inside the case. It’s just a shame they don’t put the artwork on the disc itself, instead opting for a white disc with text.

Extra features for the three films include commentary with director Albert Pyun, which plays over standard definition footage of each film. The first commentary runs roughly 30-minutes, the second runs roughly 17-minutes and the last is around 20-minutes. Also included are three trailers for each of the films.

The Nemesis sequels aren’t that great. That’s fairly obvious if you read any part of my review. The first movie wasn’t spectacular either, but it had its merits. Unfortunately, the sequels have hardly any merits and can be a job to get through. Nevertheless, there are people out there that enjoy these films, and they do make great fodder for people who want to put them on at a party and make fun of them. If you’re going to do that or if you happen to be that one fan out there, MVD Rewind releases a solid enough Blu-ray that if you can find it for cheap, you won’t be too disappointed buying it.

Check out our extensive screenshot gallery from this Blu-ray for more images.