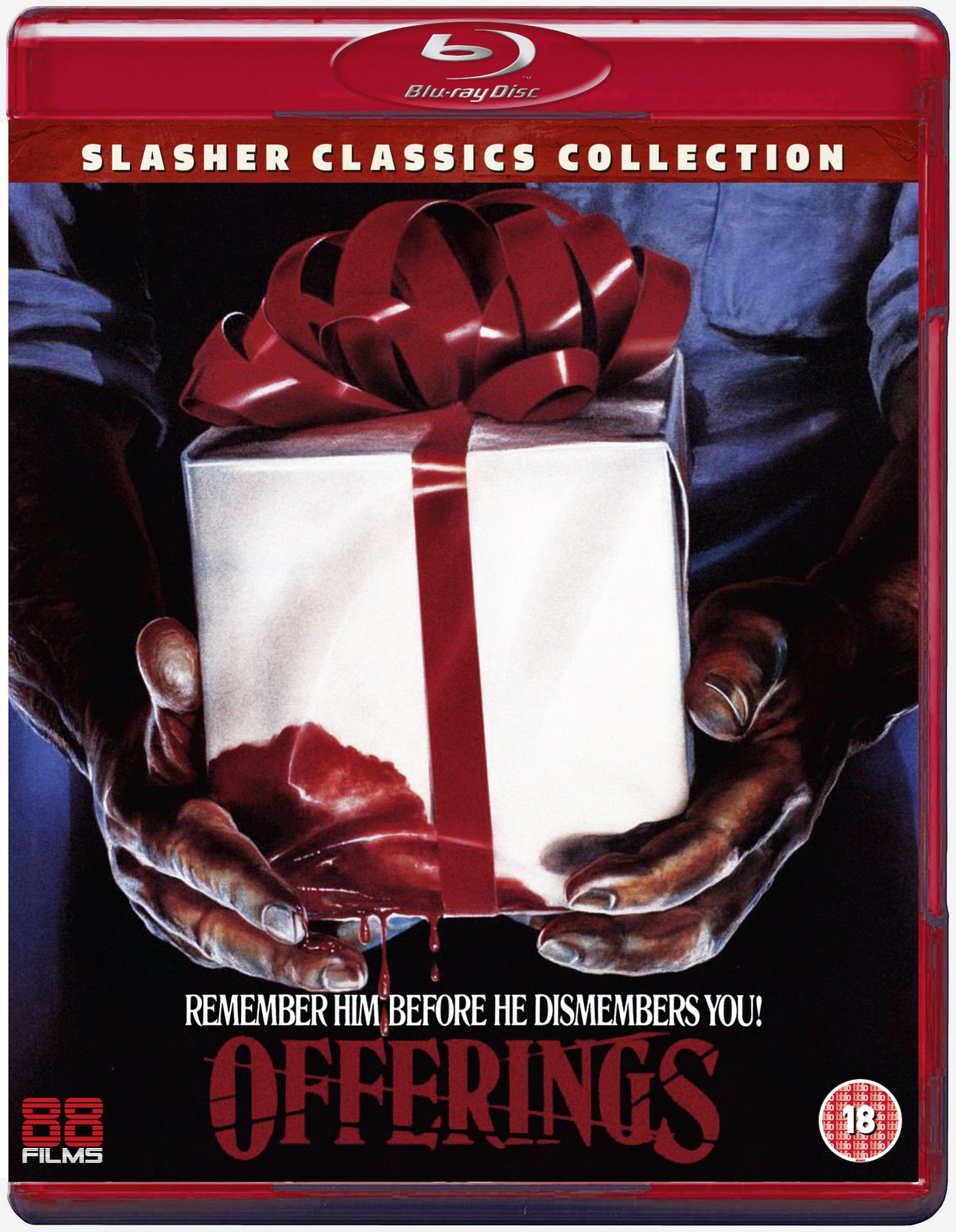 Offerings Blu-ray Review (88 Films)
Offerings is an interesting film despite its derivative slasher nature. 88 Films has done a good job with the 2k restoration, and has included an extra feature for additional value.
Film
Blu-ray
Reader Rating1 Vote
3.9

Ten years ago, kids tormented local kid John Radley and pushed him into a well. Now, he’s back to target the people who caused him such mental and emotional anguish; escaping from a mental hospital, he goes on a rampage, specifically targeting Gretchen and leaving her various body parts on her doorstep and, even more kindly, a couple pizza pies. With the help of small town sheriff Chism and some dude who studies psychology, they hope to catch John before his murder spree continues.

In 1989, the slasher boom was waning significantly; sequels to the more prominent films were already dropping from box offices, and the rush to put out increasingly more violent and sexually depraved sequels seemed to be behind the cinema industry. But Christopher Reynolds’ Offerings hoped to revitalize the sub-genre with a copycat approach: take the most impressive films in the slasher era like Halloween and transpose every single one of its best moments into a different storyline. Thus, a story about John Radley (Richard Buswell) was born – give him a problematic past and a small town location with a few teenage kids and let the magic happen.

In general, these ideas rarely pan out well. For one thing, Offerings‘ significantly lower budget and direct-to-video release did not bode well for its performance. But more than that, it simply hit far too late in the genre’s waning days to garner much appreciation. It was a product of a time gone by, and ultimately it shot wide of the mark.

Still, Reynolds’ tale about John Radley’s escape from an asylum to hunt down classmates who once tortured him works simply because of its tenacity; it is fully entrenched in the slasher genre, and it certainly understands its place in the hierarchy. Reynolds’ script is all over the place, but its most consistent quality is that it seems to recognize the goofiness of the plot and he embraces the sillier aspects of slasher films to give the audience a fun time. Take, for instance, Offerings‘ main conceit of the killer leaving body parts on Gretchen’s (Loretta Leigh Bowman) front doorstep: it’s ridiculous, and it doesn’t fit with how reality might dictate what a normal police officer would do in such a situation, but its devotion to the scenario is commendable. Reynolds even throws in a bit of cannibalism to make things interesting, what I guess could be considered an homage to A Nightmare on Elm Street Part 4‘s grotesque pizza.

More often Offerings works on the level of creative copycat than it does a bona fide innovator, and that’s what makes it a particularly interesting film contextually. Its soundtrack is “borrowed” – and perhaps in some areas stolen – from Carpenter’s Halloween, but seeing Reynolds wear his inspirations on his sleeve makes Offerings a delightfully enjoyable experience. Not much can be said of its acting, or its violence, or any of the other elements a conventionally good slasher film might evoke. But Offerings conjures an entertaining piece of cinema that plays out both as an ode to its slasher brethren and as an example of why the genre had steadily petered out by the time of its release.

Offerings is not overly violent; it does have some inventive kills thanks to its eccentric killer, and there’s one in particular that comes off as intentional comical as all of his weapons continue to break. But much of the gore occurs offscreen, forcing the viewer to imagine the carnage.

None, unless you count the bare torso of Loretta Leigh Bowman or some of the shirtless guys in the film.

88 Films has released Offerings on Blu-ray as part of their Slasher Classics Collection, which means that this gets the standard red Blu-ray case and reversible cover artwork to take away the Slasher Classics heading and the UK rating label. The picture itself is a 2k restoration of a 16mm print in 1.78:1 aspect ratio. Offerings will never look particularly good because of its format, but 88 Films has done a fairly good job with the transfer itself. The film often looks soft and at times blurry, with a limited depth and inconsistencies within each scene. Some night shots are particularly problematic because of heavy grain presence that fills most of the screen; however it is preferable to unnatural DNR that could be applied. Surprisingly, film damage is kept to a miniumum. Otherwise, Offerings does have some good textures and does shine at times.

I can’t speak from experience about the Code Red/Dark Force/Kino Lorber Blu-ray’s 4k presentation in comparison to this release because I haven’t seen it in action, but I don’t know that a 4k scan will increase the quality much more than this 2k representation and screenshots look fairly comparable.

88 Films includes an LPCM Stereo soundtrack that is serviceable and most likely representative of the original release. Many of the flaws seem inherent due to the film’s budget, with poor audio recording and echoing dialogue being most prominent. Most impressive is the soundtrack, which does sound quite good and effectively showcases the Carpenter aesthetic. English subtitles are also included.

88 Films has enlisted The Hysteria Continues, the entertaining podcast group, to complete a full audio commentary for the film. They do a good job of working through Offerings as a slasher film of its time, commenting on its less-than-stellar production but noting its importance all the same. The other extra is a trailer.

Again comparing this to the Code Red/Dark Force/Kino Lorber release, the audio commentary adds an additional reason to pick this Blu-ray up over that one. Ultimately this is a great release for fans of slasher films and it is a welcome addition to the Slasher Classics Collection.