Despite its release in 1990, the punky neon-lit ’80s were still kicking in VV Dachin Hsu’s Pale Blood, a broody city-set vampire film starring George Chakiris and Wings Hauser. The film features the allure of brethren like The Lost Boys and Fright Night without the explicit focus on the vampires; instead, the storyline revolves around Chakiris’ pale dark character Michael Fury, who heads to LA after hearing about a series of vampire-like slayings. He hires the vampire-obsessed Lori (Pamela Ludwig) to investigate, but she suspects he’s really the vampire in question. And at the heart of this dark murder mystery? A romantic love story.

Hsu sets up a particularly interesting plot in the opening moments of Pale Blood; it’s not quite clear whether the audience is supposed to immediately suspect Chakiris of these vampire murders, or if there’s another mysterious vampire on the loose in LA. The film also features some stilted dialogue thanks to screenwriter Takashi Matsuoka; the awkward silences are at first off-putting, but they begin to make a weird bit of sense the longer the film goes on. What at first seems like either bad writing or poor delivery expands to fit the movie’s theme about the disconnection of the vampire race due to their near-extinction.

Pale Blood has a nice twisty direction aided by the presence of Hauser, who plays video “artiste” Van Vandameer. The character name might give it away, but Vandameer ultimately becomes an antagonistic presence that at first seems like the opposite. Hauser plays the character well with the shift in personality, and he truly steals the show with his over-the-top antics. While audiences might see the conclusion coming, Hsu’s direction is intriguing enough to keep viewers along for the ride in this pulpy late-night vehicle.

The film is certainly a product of its time, and Hsu takes liberties to include a lot of the scene of ’80s LA. Agent Orange makes a number of appearances with sporty montages set to their songs “Fire in the Rain” and “So Strange,” and there’s also a unique compilation of LA scenery paired with increasing dialogue from news reports. Not everything works, but Hsu’s direction is certainly creative and her unique elements help Pale Blood stand out.

While Pale Blood is certainly not as memorable as some of the big vampire flicks from the ’80s, it sits in its own bloody cachet, and it’s nice to see it get a proper release for modern audiences with this Blu-ray.

Vinegar Syndrome gives Pale Blood a new 2k scan from the 35mm interpositive and the results are lush and detailed. Grain is fairly consistent though darker scenes tend to have a heavier smattering and one close-up shot in particular – late in the film with Hauser – suffers a bit in comparison to the rest of the movie. However, colors are well-maintained which is a particular feat thanks to the cinematography, which features a wealth of different red and blue hues. Overall detail is well-maintained even in particular dark scenes without crush. Even Chakiris’ intentionally pale features look natural. This is a great new scan from Vinegar Syndrome that breathes life into this movie.

There are two audio tracks on the Blu-ray, though there’s no setup menu to choose between them. The default is a DTS-HD MA 2.0 Stereo track, though there is also a Dolby 2.0 track as well (see Speks) which is presumably included because of the DVD. While I have noticed other reviewers state sibilance issues, it seems those are extremely minor because I didn’t notice anything detracting. Otherwise, the soundtrack is voluminous and full, with good volume and great handling of Agent Orange’s punk music.

Extra features include two new interviews. The first is with director VV Dachin Hsu (name now changed to Jenny Funkmeyer), who talks in detail about writing the film and directing her first feature right out of film school. The other interview is with actress Darcy DeMoss, who has a limited role as Cherry in the movie. She talks about working with Wings Hauser, not realizing she had professional connections to George Chakiris, and more info about the movie.

This package also comes with a DVD version and reversible cover artwork.

While the extra features are limited, this is otherwise a great release with an excellent new HD scan and certainly recommended, especially if you haven’t seen Pale Blood. 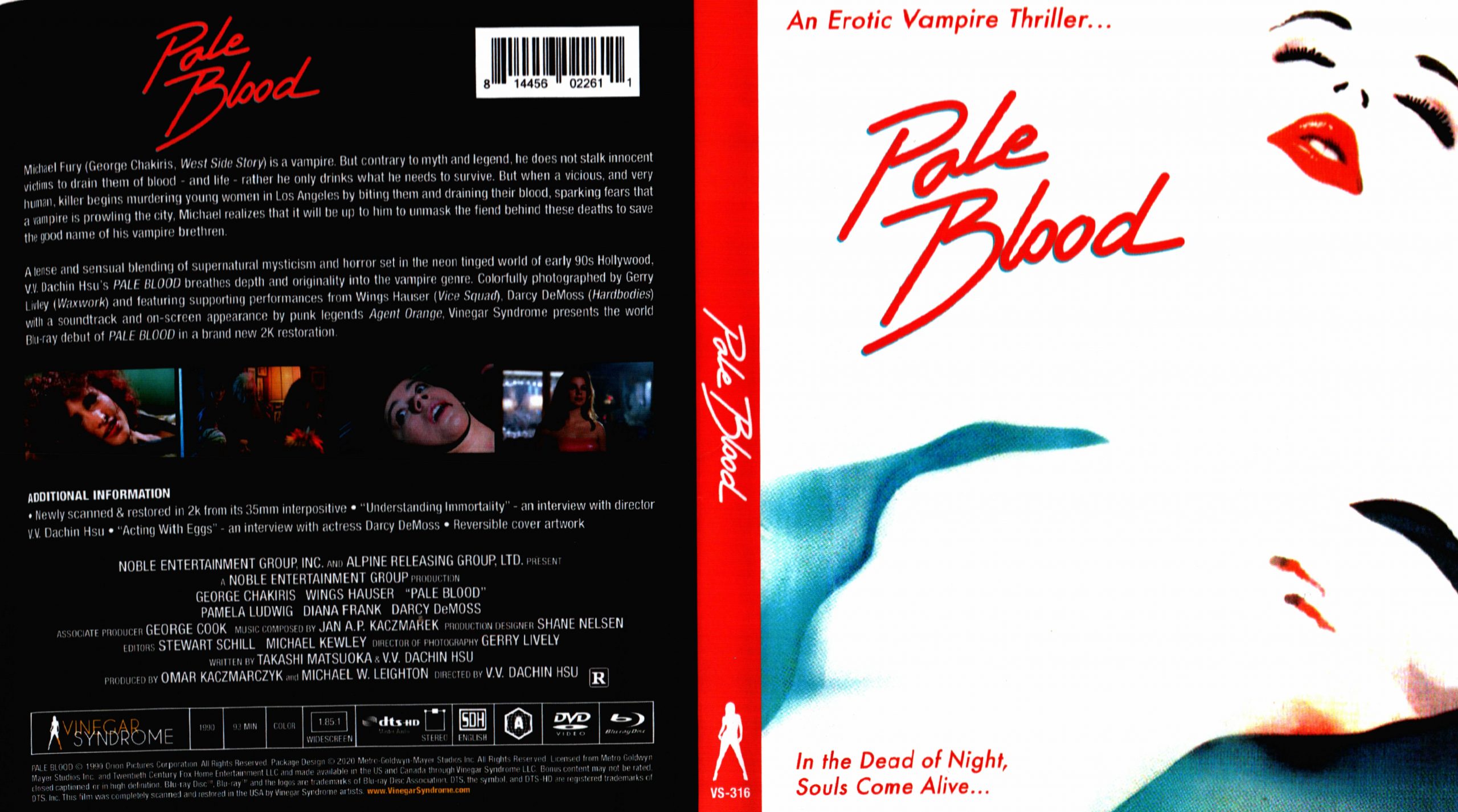