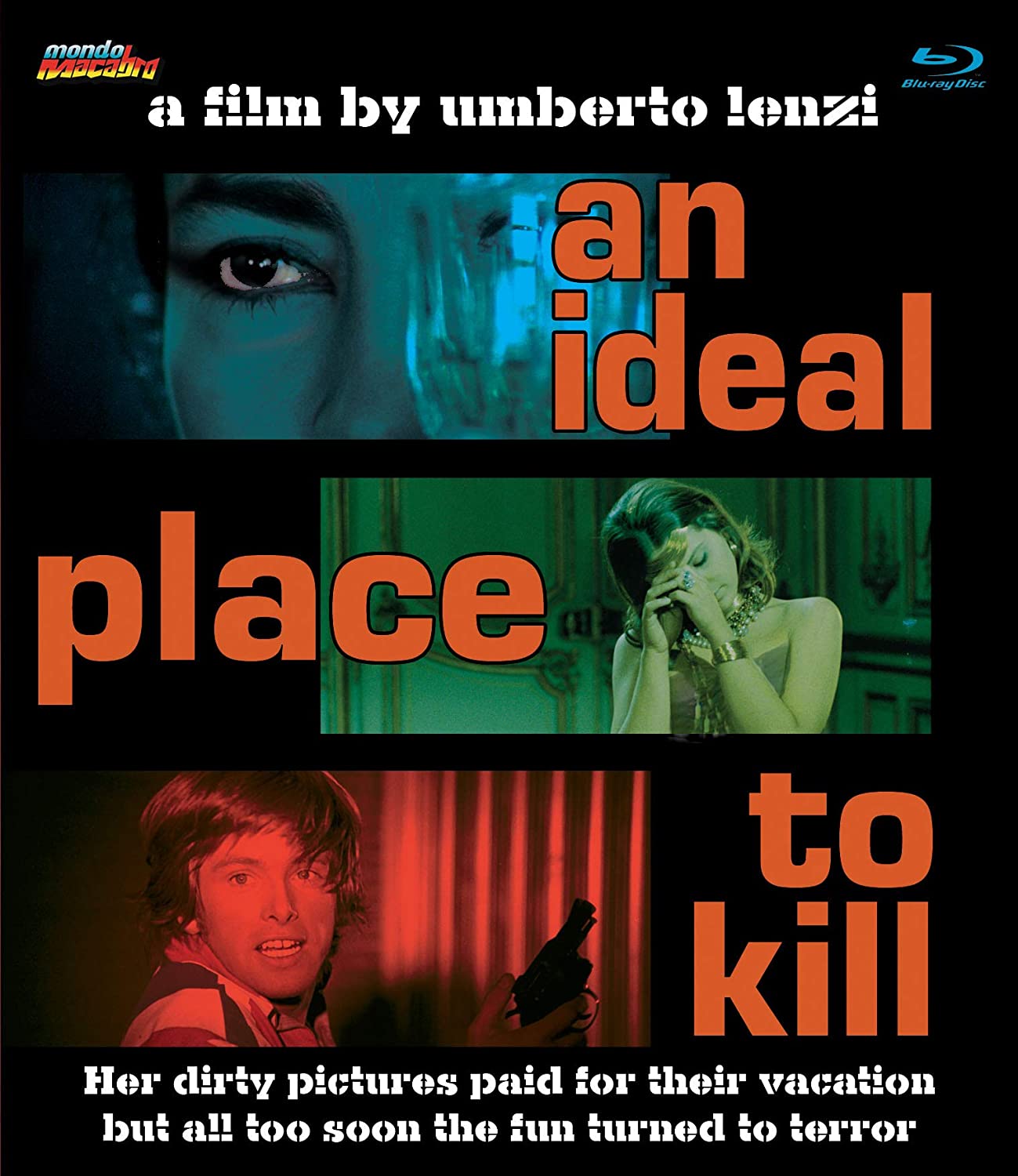 No pornography on vacation

Umberto Lenzi’s 1971 giallo/horror film An Ideal Place to Kill (also known as Oasis of Fear or, less frequently, Deadly Trap and Dirty Pictures) might seem inexplicable to modern viewers without historical context. Its Italian setting – the vacation destination for film protagonists Ingrid (Ornella Muti) and Dick (Ray Lovelock) – provides the main theme for the film’s topic, putting the main characters’ vagabond-esque hippy lifestyle at odds with the more rigid strictures of ’70s-era Italian culture. Namely, that boils down to pornography; despite Italy’s penchant for violence and nudity in their films, the ’70s actually saw a crackdown on pornography, even banning the sale of nude images. Thus, the central conceit of An Ideal Place to Kill – that Ingrid and Dick are traveling Italy attempting to finance their trip by selling legally purchased pornographic magazines and records and, later, Ingrid’s own nude photos – might initially be lost on some viewers, but that just makes the often disjointed elements of Lenzi’s direction that much more effective.

Throughout most of the first half of the film, An Ideal Place to Kill doesn’t seem to land on storyline. It follows Ingrid and Dick through their travels while they become Italian criminals effectively forced to leave the country for selling pornography. Pretty soon they land at Barbara’s (Irene Papas) villa, who seems to be extremely jumpy though she invites them in to stay the night. Pretty soon we’ve got a weird love triangle going on and a plot that doesn’t really seem to be going anywhere.

But Lenzi’s direction, relying on some surrealism and the main characters’ odd personalities, leaves things intentionally ambiguous. Like Ingrid and Dick, the audience is supposed to be feeling a little off-kilter; Lenzi leaves us as the audience to question why Barbara is at first so tense and then more open, what her cryptic phone calls mean, and the reason behind her sexual escapades with Dick. This is a giallo without the black-gloved murderer prowling around. Instead, An Ideal Place to Kill‘s mystery is less “Whodunnit?” than “What happened?”

While An Ideal Place to Kill lacks the violence and murder mystery of a traditional giallo, at its heart is an intriguing story about crime and punishment, and its unique pacing is both a boon and a curse depending on the viewer. However, one thing is for sure: all viewers owe themselves a chance to at least try this oasis.

Mondo Macabro’s Blu-ray of An Ideal Place to Kill is the first time this particular film has gotten a proper HD release, and they’ve done a new 2k scan of the original camera negative. The results are impressive, with gorgeous detail in both interior and exterior shots, along with excellent depth despite the film’s overall softness. Grain is consistently medium-high but without obstruction; black levels are well-managed without crush. Close-ups showcase the fine detail in this transfer. Overall, this is an excellent-looking release from Mondo Macabro.

Audio comes in either a DTS-HD 2.0 mono English or Italian track. The film was shot in English, so that is most likely the ideal way to watch it, but both tracks sound strong without muffling or drops. The English track does feature a few scenes with Italian dubbing, which are paired with an automatically-selected English subtitle option that only provides subtitles during the Italian dub. The second English subtitle corresponds with the Italian-language track. There is no option for subtitles throughout the entire English soundtrack, which I would have liked to see as a third option.

Extras include an archival interview with Umberto Lenzi about the film, where he goes into detail about the pornography smuggling and its outdated context for modern viewers, as well as the intended subplot to be about drug smuggling. He also touches on a few of his other films, particularly Orgasmo, in the latter part of the interview. Also included is a new audio commentary from Troy Howarth and Nathaniel Thompson. There are four X-rated inserts that were cut from the normal film – all are either from magazines or inserts from body doubles, since neither Muti nor Papas did their own nude scenes. A trailer and other trailers from Mondo Macabro releases round out the extras.

For anyone interested in giallo or Lenzi’s body of work, they really can’t skip this release of An Ideal Place to Kill. It features a great transfer and some nice extras, with a film that is much more effective than even Lenzi believes it to be. 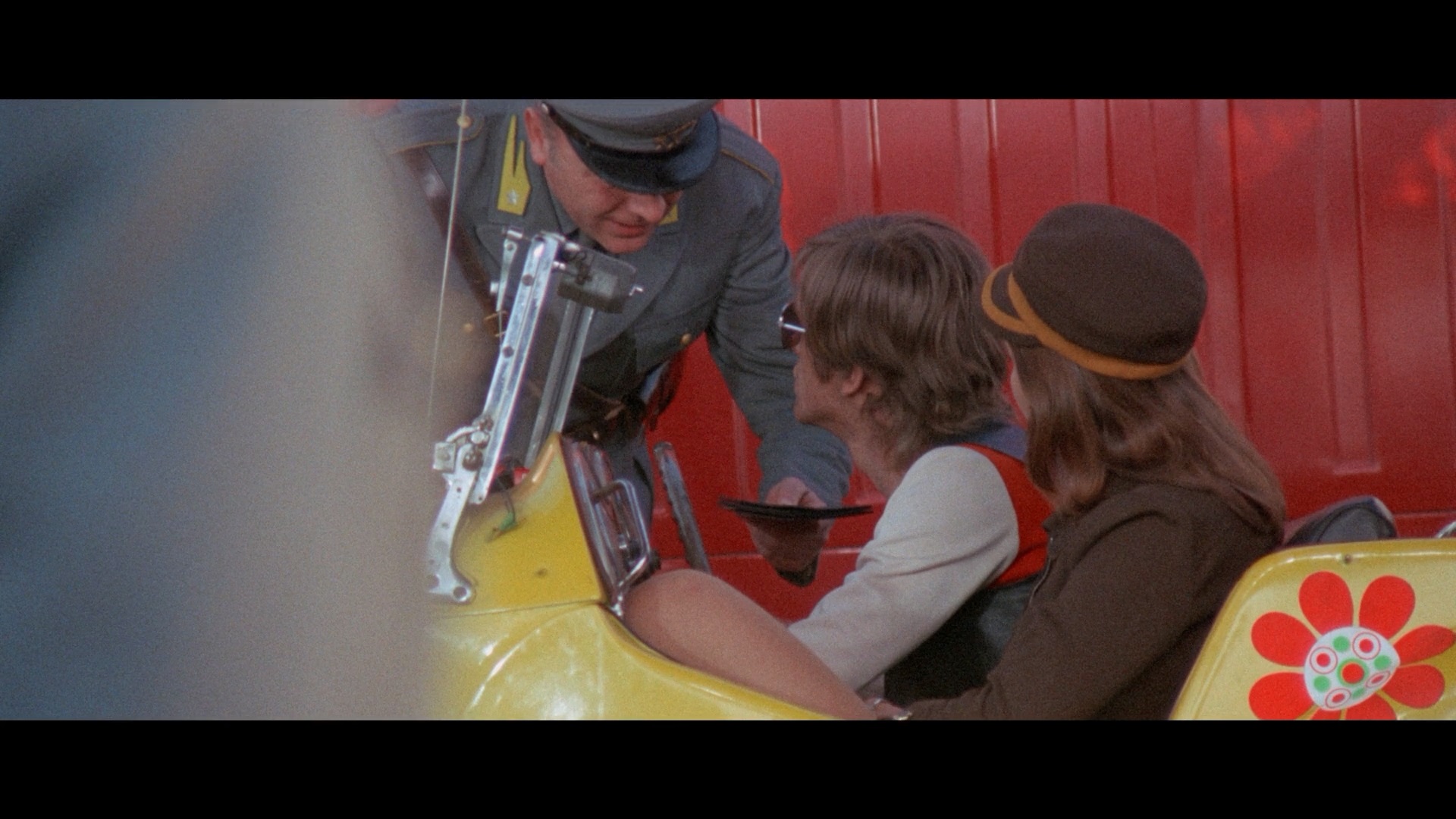 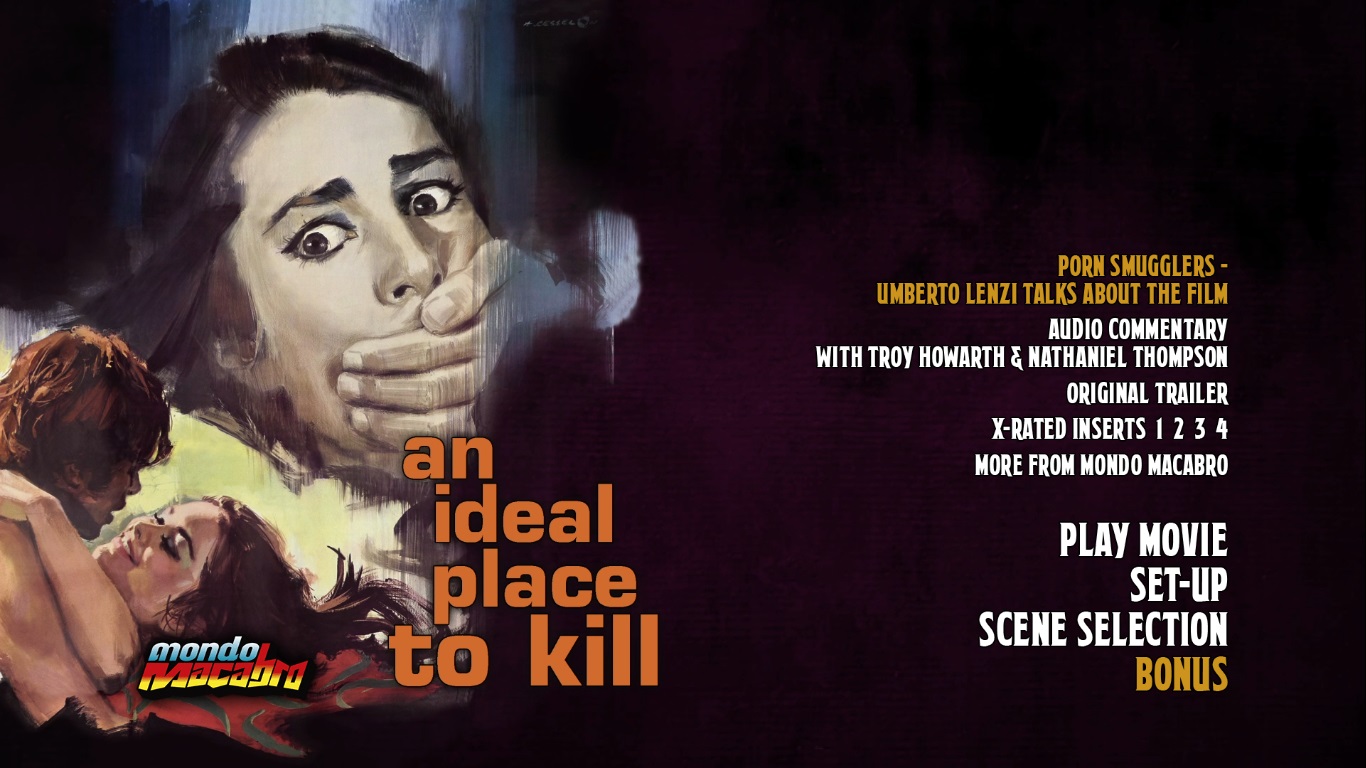 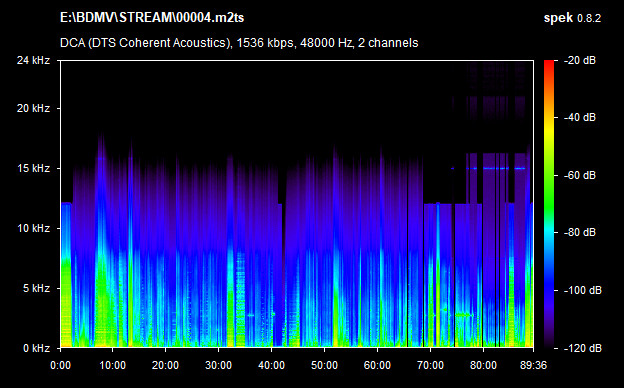 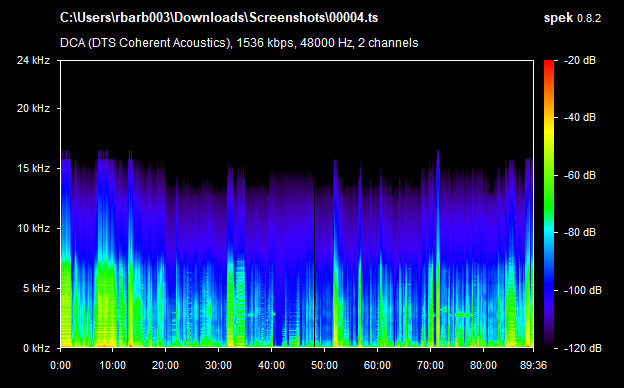 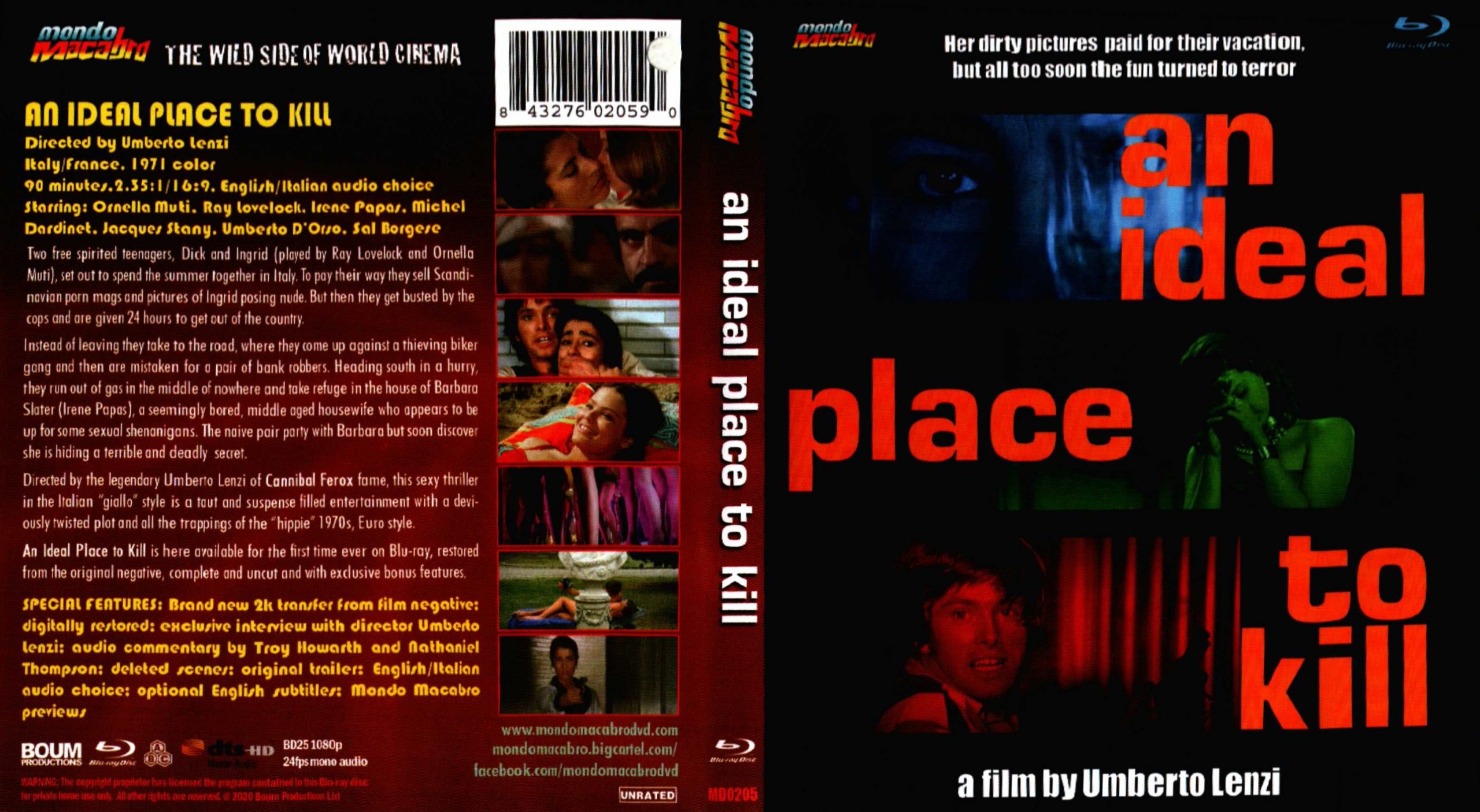