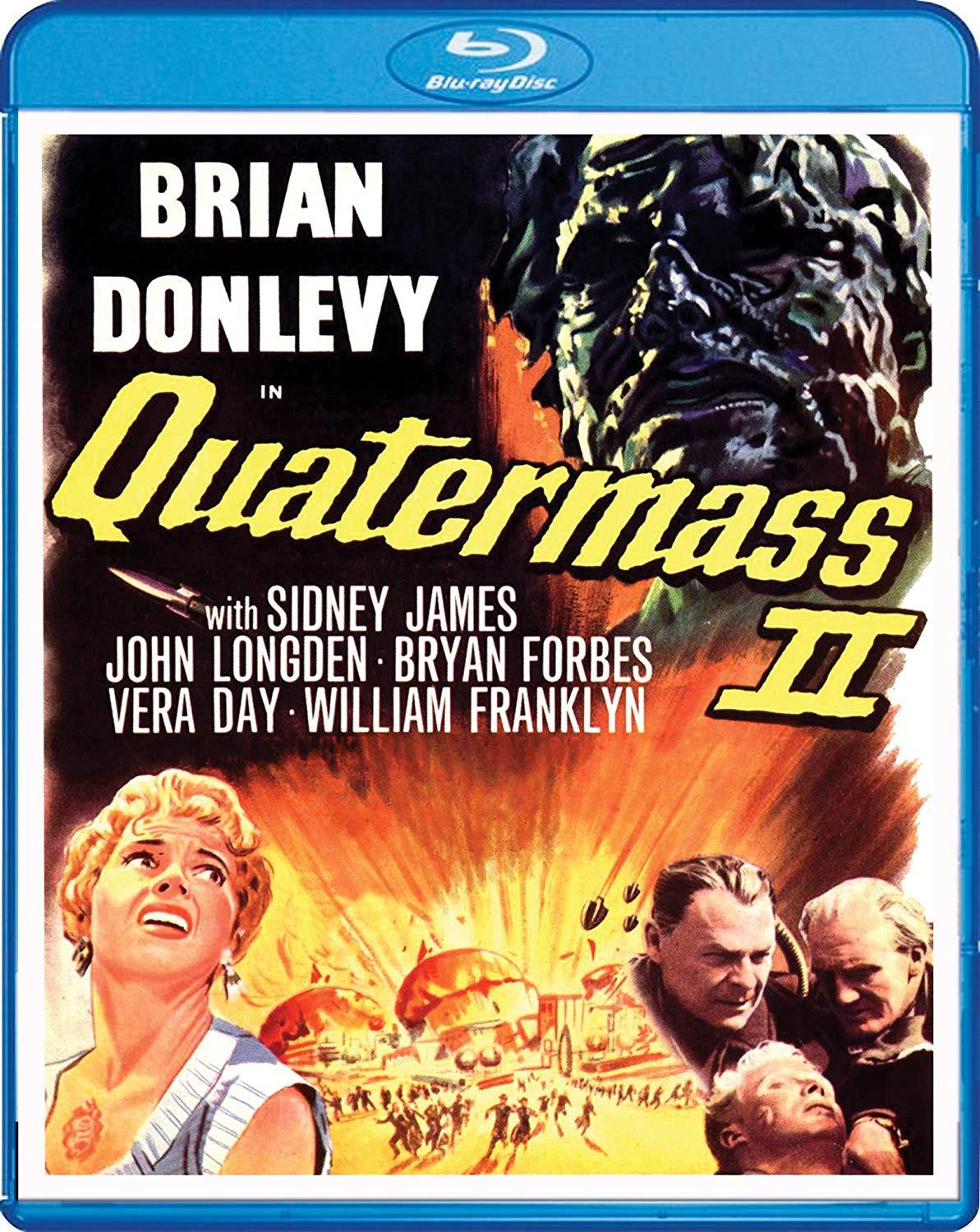 Despite some audio issues, this is the best release of Quatermass II available. Pick this up if you're a fan of classic scifi.
Film
Blu-ray
Reader Rating0 Votes
3.5
Buy
Amazon

Quatermass II was originally a series of 6 episodes on the BBC, soon after adapted as a sequel to the popular Hammer film The Quatermass Xperiment. Serial writer Nigel Kneale reprises his duties on the script, and Brian Donlevy appears once again as the titular scientist Quatermass. Directed by Val Guest, the film closely follows the plot of the original 6-episode serial as Quatermass and his group of scientists discover a top secret government operation storing “synthetic food” at a large industrial plant; digging deeper into the mysteries of this area, they realize that strange rocket-like objects have been falling from the sky, and when they explode they infect their victims with a large wound that indicates they’ve been bodysnatched. Not only that, but the storage tanks are housing something much more dangerous than synthetic food – instead, it’s some sort of ammonia-derived life forms from space, thus the alternative Enemy from Space title.

Donlevy’s Quatermass is well known for being something of a prick, a character trait that makes him more human than anything else about him. Quatermass II tones that down a little bit; don’t get me wrong, he’s still a dick to woman (they know to get him coffee before he even walks in the door), but ultimately Quatermass is more mild-mannered here and, as such, a tad more likable. Donlevy is one of the big reasons that Quatermass II is so successful, because watching him dourly explore the secrets behind the synthetic food project is a treat.

And to be quite frank, the body-snatching element in this film is pretty intriguing, especially with all of the scientific mumbo-jumbo being thrown at the viewer along with Donlevy’s strange pronunciation of “methane.” Quatermass II does a good job of making it seem like threats are everywhere, especially when it’s revealed that the London police captain is also part of the alien faction. The film’s finale – which features a number of armed guards and three massive blobs of Lovecraftian alien life forms – is particularly suspenseful too, with lots of particularly violent deaths as people are shot up or, in Quatermass’ words, turned into “human pulp.”

However, the film’s biggest downfall is its muddled scientific explanations, which, towards the end of the film, basically rely on Quatermass demanding people to do random things like messing with valves in order to kill the aliens, or shooting a nuclear-powered rocket into the air to destroy the alien’s asteroid. This all clumsily managed, and one wishes Guest had spent a little more time documenting the nature behind the aliens. Still, the finale is thrilling enough where one can overlook the mishandling.

All told, Quatermass II is another successful entry in the series and it certainly continues to show why Quatermass is an enduring character. This has a great mix of traditional science fiction and some first-rate horror elements, leading to a surprisingly violent payoff.

Scream Factory has released Quatermass II with a new Blu-ray that features a new 2k scan of an archival film print. Previously the film had been released on DVD with an open matte 4:3 ratio, but Scream Factory has maintained its original 1.75:1 AR for this release. The result is a transfer that looks quite good despite its age and some decay. For the most part, detail is quite good and maintains a consistent focus throughout; grain is medium-heavy but not obstructive and mostly present in brighter shots. Like most releases, this still does suffer from some deep heavy blacks; this is partially due to the day-for-night shooting, but most prevalent is the extremely oppressive darkness of the movie’s opening sequence. Luckily most of the film doesn’t take place in the dark, meaning these crush-level blacks aren’t too prevalent. Other than that, though, this release features a quality scan most viewers will appreciate.

Audio is presented with a DTS-HD MA 2.0 mono track, and a few issues did seem to arise during my viewing. The dialogue itself is somewhat thin, but more than that, I did note occasional volume drops during dialogue. This happens sporadically throughout the release; for lengths of time there will be no drops, followed by a scene that features two or three moments. It doesn’t hamper the experience too poorly but it was definitely noticeable enough to comment on. English subtitles are also included with yellow font.

As for extras, Scream Factory has assembled a couple of new interviews, one with special effects artist Brian Johnson and another with assistant director Hugh Harlow. Both are extremely short, lasting just minutes, but it is nice to see they were able to assemble at least a couple of contemporary interviews. Also included are two new audio commentaries; one comes from film historian Ted Newsom, and the other from Scream’s go-to pairing of Steve Haberman and Constantine Nasr. This adds some excellent depth to the release, along with an older commentary track from Val Guest and Nigel Kneale.

Vintage extras are also included: an older interview with Val Guest, a World of Horror scifi episode, and theatrical trailer and still gallery. Reversible cover art with the Enemy from Space title is added too.

For fans of Quatermass, this Blu-ray is absolutely worth a purchase. It has a good transfer and a number of extra features that makes it worth upgrading from a less-than-stellar DVD release.