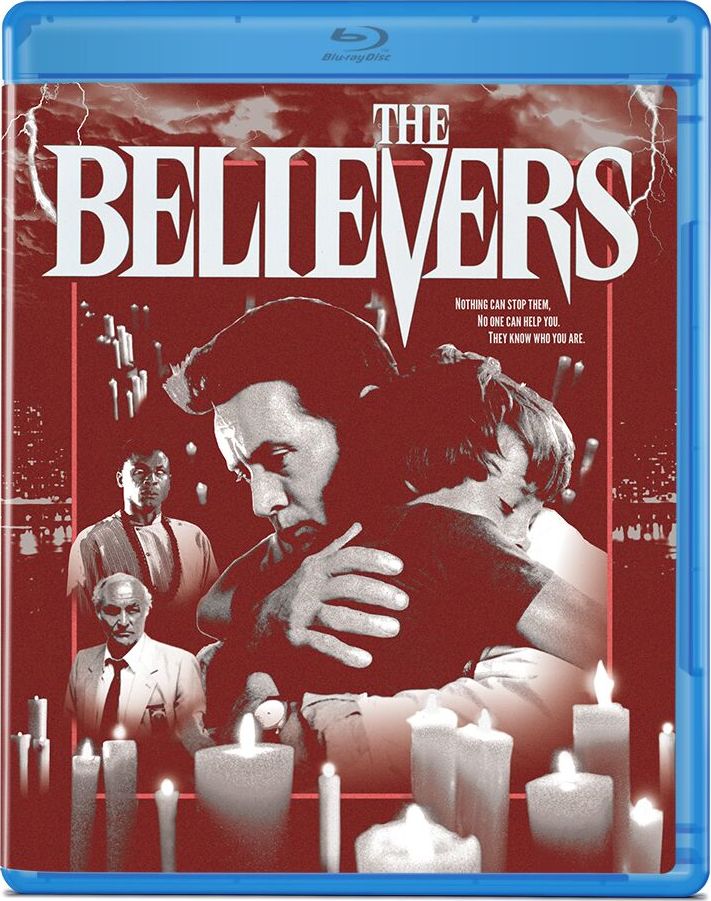 Featuring some truly creepy scenes, The Believers is a fantastic film and the Olive Films Blu-ray is worth picking up if you didn't get a chance to buy the Twilight Time release.
Film
Blu-ray
Reader Rating0 Votes
3.5

Released in 1987 and based on Nicholas Conde’s book The Religion, director John Schlesinger’s The Believers is a compelling murder mystery doused in voodoo mythology and credible acting. The film stars Martin Sheen as Cal Jamison, who, after a tragic accident, moves to New York City with his son Chris (an incredibly competent Harley Cross) and becomes embroiled in a murder mystery involving young boys being ritualistically sacrificed. Cal becomes involved when undercover cop Tom Lopez (Jimmy Smits) becomes scared for his life and says the people that killed the boy are going to come after him. Cal is a psychologist and tries to help Tom, but he is too late. Clues have been left for Cal that lead him on a dangerous journey against a mysterious and deadly cult, one that is now targeting his son.

Having not read the book (I do own it, so that is going to be corrected shortly), it’s hard to say how closely The Believers follows the novel. Of course, any adaptation doesn’t need to follow the source material to the letter, especially when the result is something great like The Believers. The movie clocks in at 114-minutes, but I can’t think of any time my eyes weren’t glued to the TV screen. What makes the film so engaging is the mythology and mysticism around the religion known as Santería, which means the “worship of saints”. In the film, the Santería religion is being twisted by a group of individuals for their gain. One such individual is Palo (Malick Bowens) who uses his evil powers to curse people, and this often leads to the films most gruesome scenes. One word: spiders! Seriously, I’m not going to be able to forget that scene.

The Believers does have a few issues that should be noted. An enjoyable character is left in the dust at the end, and you have no idea what happens to them. The purpose of the cult is also pretty vague, with some questions of their motives and practices left dangling. Lastly, the ambiguous ending might leave some disappointed. Thankfully, most if not all of these issues don’t even begin to affect the overall enjoyment you’re going to get out of this flick.

Olive Films has released The Believers on Blu-ray, and the result is a mixed bag. The video quality is clean and clear, with grain visible, but never distracting. It’s only when you start to compare this release with the two past releases from Twilight Time and OFDb Filmworks that you see some inconsistencies. The Twilight Time release is the brightest of the three, with more detail showing up in darker scenes. The OFDb Filmworks DE release is darker and it is this release that Olive Films matches the closest, save for the OFDb version having sharper grain. It’s been reported that the same master that Twilight Time used was also used for the Olive Films release, but as to who messed with the contrast is hard to say. It could be that Twilight Time tweaked the transfer some to bring out the details and the other two companies left it as is, but that would be mere speculation on my part. Overall, it’s safe to say the Twilight Time is the best looking of the bunch, but you can’t go wrong with the Olive Films release. Audio is presented in DTS-HD Master Audio 2.0, and no issues cropped up. Everything sounded clean and clear. Extra features sadly only include a Trailer.

The Believers serves up plenty of scenes that will stick with you for a very long time. The mysticism of the story was incredibly engrossing and the acting is solid all around. Olive Films’ release might not look as great as the Twilight Time release, but for the price and ease of availability, you can’t go wrong picking it up.