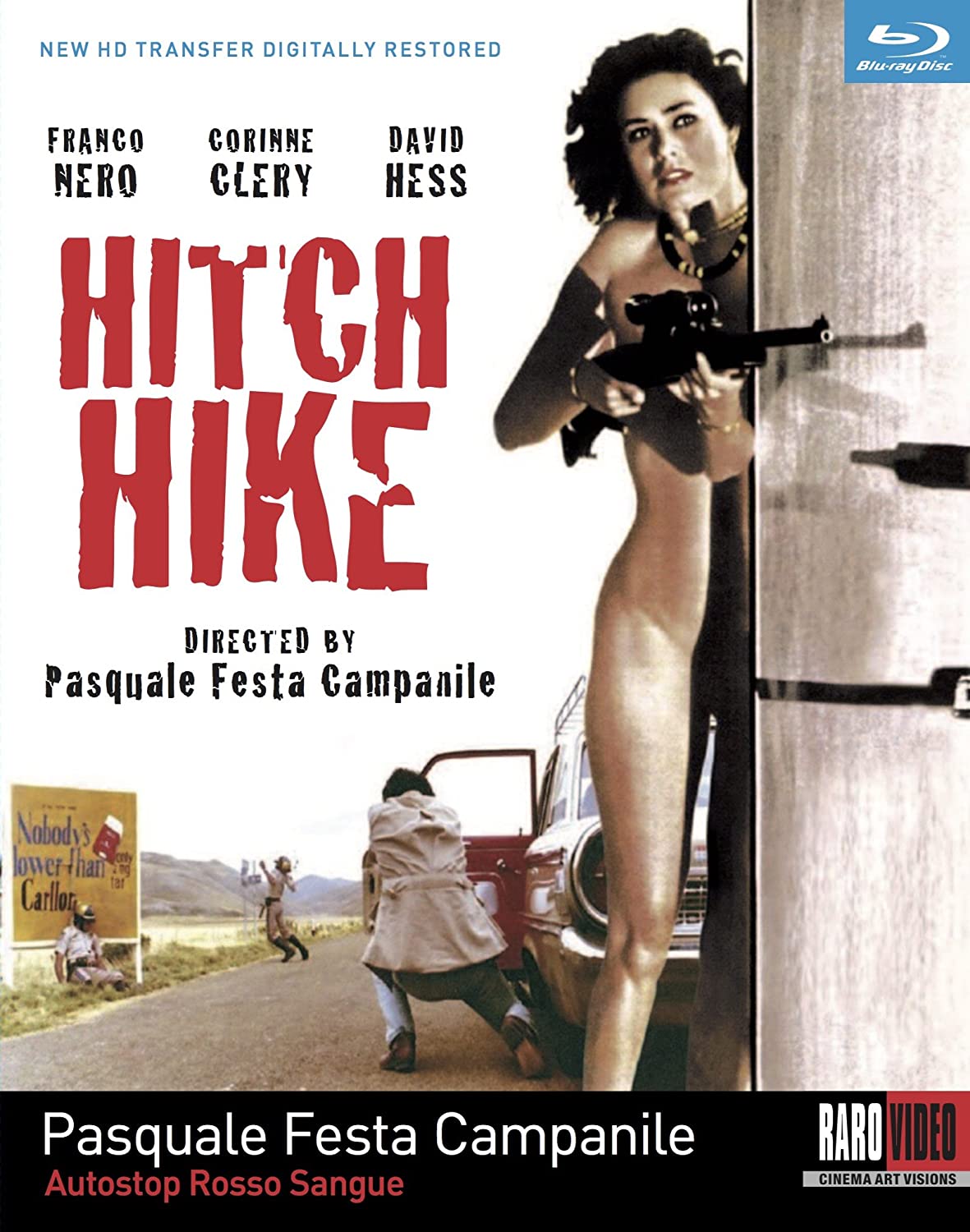 asquale Festa Campanile’s 1977 Italian thriller Hitch-Hike (or Autostop rosso sangue in its native language) doesn’t exaggerate the violence of its hitchhiker like other films with the same plot. Instead, Campanile explores the real psychological terror of a couple who are forced to see the ugliness in their own lives, abstaining from making the villain the most important part of the film. Though Hitch-Hike is a crime drama on the surface, it’s more of a character study between a man and a woman and the difficulties of navigating that territory, of crafting and sustaining a meaningful relationship when both people involved are miserable. It just so happens that a hitchhiker gets in the middle to escalate things even more.

Hitch-Hike has a familiar plot, even for its release in 1977. Eve (Corinne Cléry) and Walter (Franco Nero) are traveling through Nevada on a camping trip when Eve decides to pick up a stranded hitchhiker named Adam (David Hess) on the side of the road. It’s the basis for all kinds of horror stories, ones where the hitchhiker is devilishly evil and outlandishly violent, and Campanile seems to be heading down that road in the film’s opening moments, deciding to quickly expose Adam for a killer who has made off with about $2 million in cash.

But Hitch-Hike bides its time, escalating the tension; Hess’ Adam is smarmy but also handsome, mentally ill and also sometimes pathetic, and Campanile allows the trio to feel each other out during what otherwise would be a boring ride through faux-American settings. Walter and Eve are clearly unhappy with each other, an early narrative choice that forces the audience to contemplate whether Adam or Walter is the worse of the two. There’s an unwanted groping scene involving Walter at the beginning of the film that immediately colors the audience’s perception of the man; and similarly, Campanile gives Adam many of the same qualities, a man who is not only explosively violent but psychologically manipulative. Craving power, he lords his conquests over Walter in rivalry, treating Eve like a sex slave and continually calling her a “gilded ass.”

Hitch-Hike is often an uncomfortable viewing experience. Campanile’s pacing paired with Adam’s unstable reactions allows the film room to play with viewer expectations. Much of the movie simply makes the most of exchanges between Nero and Hess, both of whom bring their characters to life by playing up the most animalistic qualities of their roles. Ennio Morricone’s soundtrack, too, sets the tone, a playfully sinister riff that repetitively scores this never-ending road trip.

Everything comes to a head in a disturbing rape scene that, while difficult to watch, sees Campanile carefully treading the line between terror and exploitation. Walter is forced to watch as Adam begins to rape Eve, only to find that, as the heat of the moment continues, she is strangely aroused by this situation. The scene painfully continues, an extensive documentation of the act while Walter silently sheds a tear, and this act of betrayal and cuckolding is one of Hitch-Hike‘s most impressive – and ultimately horrifying – scenes.

Hitch-Hike would seem misogynistic – especially given Eve’s fate – if the film wasn’t so misanthropic throughout. Campanile has a tendency to drape his characters in a quiet hatred, never allowing the viewer to like any one of them too much. It’s easy to feel sorry for Eve, and yet her intentional prodding of Walter – slowly eliciting the worst of his qualities – is exposed throughout. Even most of the secondary characters, like teenage bikers in a small-town rest stop, are interested in only money.

That thematic focus on the money as a harbinger of happiness is pulled together in the conclusion, as Eve and Walter flip their car in the desert and Walter sets it on fire in order to stage Adam’s murder and get rid of Eve once and for all. The money is a symbol of what could be, but Campanile exposes the irony and falsity in Walter’s beliefs: there’s no happiness for these miserable people with $2 million, only a life spent arguing over one thing or the next.

As Hitch-Hike closes with a freeze-frame of Walter extending his thumb to hitch a ride, Campanile includes a quote, translated loosely: it is not the couple that is the problem, but the man and the woman. Hitch-Hike depressingly epitomizes this misanthropic idea with a well-directed and discomfiting thriller, a flick that is well worth the ride.

RaroVideo’s Blu-Ray release of Hitch-Hike comes in their standard packaging: with a slip-cover, a Blu-Ray box with alternate cover artwork, and a pull-out essay on the film with full-color photos. Again, I’m a sucker for inserts, and I appreciate that this essay is not just a rehashed version of a bonus interview.

The HD transfer from original 35mm negative looks good, with just a few grain issues at times in darker lighting; the film looks great, with warm color tones. Audio comes in the form of the original Italian track or the English dub; for this release, I watched the Italian and had no complaints in terms of quality. Newly translated English subtitles are also included.

For extra material, Hitch-Hike has only one feature: an almost thirty-minute series of interviews with the cast and crew of the film, including Nero, Cléry, and Hess. This is a great offering that gives good insight into the making of the film, including Hess’ filming of uncomfortable scenes with Cléry and the Nero’s self-promotion on the set. The bonus documentary adds even more value to this Blu-Ray, especially since Hitch-Hike is a must-see exploitation film in this viewer’s opinion.