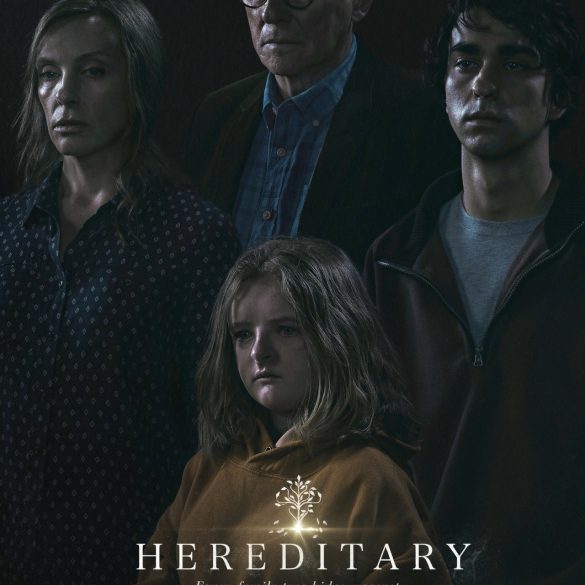 Hereditary Movie Review (ROTTEN KIDS WEEK)
Hereditary is harrowing, emotionally exhausting, and haunting. It gets under your skin and doesn't let up despite a deliberately slow pace. Keep an open mind, and eventually its trauma will eat away at you.
Film
Reader Rating0 Votes
4.8

The Graham family deals with tragedy after Annie’s mother passes away, and no one is taking it worse than Annie herself. She has struggled with her mother’s mental illness for years and holds a certain guilt over herself, but eventually she is able to find a way to move on from that. Unfortunately, a malevolent curse seems to linger over the family, and supernatural forces may be conspiring against the Grahams. A rapid decline in sanity begins to take place as everyone experiences familial trauma.

Ari Aster’s Hereditary has a title that works in many ways, and it immediately sets up the main theme of the film: it’s about what you pass on to your family. But that message is skewed into varying forms throughout; it’s not just about the very literal representation of genetic passage of DNA but also the emotional and mental turmoil we may intentionally or accidentally give to those around us. Hereditary is a supernatural film through and through, but its family drama dynamic speaks to something far greater than fictional horror. It forces the audience to question what they might do when a traumatic event shakes one’s very reality to the core, when their emotional fragility is broken without possibility of healing.

Aster’s depiction of that trauma is harrowing, and there’s no better compliment to give to a horror film than this: Hereditary is often realistically upsetting, in a way that most films are either too scared or too unskilled to accomplish. Aster’s writing and direction is slow and deliberately so; the film never takes off until its final minutes, but it’s important that Hereditary keeps the candle burning methodically to build that emotional payoff. Once it hits, it’s an incredibly bleak experience, something so unpleasant that one wishes for a more fictional and less visceral trauma.

The tension is immense, the weight enormous, and there may be some who find the morbid reality of Hereditary‘s first act a bit too much. That isn’t to say that the film is traditionally scary – it is at times, but not in the way many might expect. The horror comes from scenarios that are so plausible that they’re frightening to think about, leading to an irrevocable feeling of loss and sorrow that hangs throughout the movie. Aster uses this to further a storyline about mental illness that runs in the Graham family, and then leads things directly to supernatural territory.

Toni Collette and Alex Wolff put in commendable performances, driven by dialogue deliveries and difficult reaction shots that require nuance rather than exaggeration. Aster’s slow-swiveling camera captures the grief, sadness, and rage in his characters, and sometimes the slow pace is so prolonged that it causes a unique sense of anxiety. The audience expects something to happen, and Aster gives us nothing. It’s a smothering feeling, one that toys with viewers’ emotions and their patience. This tension generated by the greatness of Aster’s actors, and both Collette and Wolff display huge range in their expressions and their unspoken subtext.

It’s difficult to talk about the rest of the film – which truly does descend into madness – without spoiling the surprise. However, Hereditary‘s twists and turns do bring the audience to a divisive conclusion, one without an explicit answer. Some will not enjoy the payoff, some will question what happened. There’s not really a legitimate answer to the question. Truthfully, it doesn’t matter whether demons or mental illness cause Hereditary‘s intense emotional struggle; either way, living with it feels the same. And at the end of the film, even the viewer’s agency feels less certain, their mental strength a bit more fragile for watching it. That’s a difficult thing to pull off, but Aster’s Hereditary passes that complex blend of trauma on to us, and it asks us to try to move on from its distressing and thought-provoking narrative.

Hereditary‘s opening scenes might seem a bit slow, even boring. But once the film really hits its rising action, Aster ups the ante. I’m not going to tell you what to expect, but things do get increasingly more violent and bizarre throughout.

There is some surprising nudity. Again, I’m not going to tell you about it. It’s not sexy.