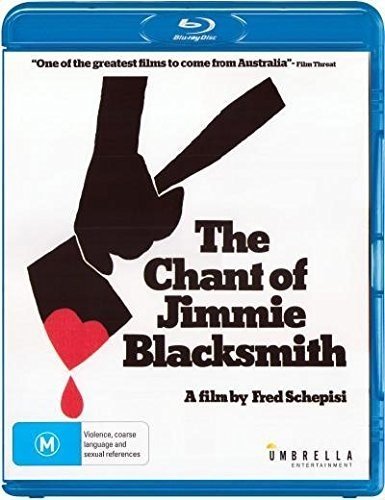 Jimmie Blacksmith, a half-Aboriginal man growing up in twentieth century Australia, experiences a number of hardships due to his lineage but eventually weds a white woman and builds his own house on some land. However, the landowner turns on him after some of Jimmie’s friends show up to live with him, and Jimmie, in a fit of rage having finally experienced too much oppression, murders all of the women on the property. From there, Jimmie and his brother Mort are forced to run from the police, starting a war against the white man that is bound to end poorly.

The Chant of Jimmie Blacksmith is partly Fred Schepisi’s answer to the US television epic Roots, but anyone watching the film can also see that it was a heartfelt attempt to characterize a particularly awful time period in Australian history with much of the same oppression that plagued America. The film takes place over the span of years as Jimmie Blacksmith (Tommy Lewis), a half-Aboriginal boy taken in by a white minister and given some opportunities others of his caste were not, still suffers for his Aboriginal heritage. It’s a compelling drama that follows Jimmie from boyhood to his life as an adult, but one thing unfortunately remains the same throughout: he’s judged by the color of his skin and his background, even to the point where people hope he can have a good life so that future ancestors might breed the black out of the family.

Schepisi’s direction is fluid but easily followed, and The Chant of Jimmie Blacksmith quickly moves through Jimmie’s early life; it shows the ghettos he hangs out in, and the “better” life he is afforded after being taken in by a local minister. But the real crux of the film begins once Jimmie is nearly an adult, setting out on his own to make money and hopefully live fairly well despite systemic oppression of Aboriginal people. Schepisi shows multiple encounters where Jimmie does work – most of it stuff he has just learned in order to make a living – and his employers skimp on the money, something that Aboriginals not only accepted but also expected.

The whole thing seems even more enraging because of Lewis’ performance; he keeps Jimmie happy-go-lucky despite setback after setback, and though Jimmie’s obviously frustrated at his lot in life, he’s also continually emboldened by his work. Schepisi continues to add to these moments with even worse encounters, like Jimmie’s police boss raping and killing an Aboriginal prisoner or showing the horrendous conditions that most of his friends and family live in. It’s easy to see the antagonist in this film, and scarily it is everyone.

Jimmie Blacksmith‘s progression leads to a heartrending end though after a brutal murder sequence wherein Jimmie and Tabidgi (Steve Dodd) hack and slash a group of white women to death. It’s a moment where the audience has to question Jimmie, where frustration has led to a violent path that will inevitably end badly. Schepisi treads lightly without explicit morals, but it’s clear that Jimmie’s violence is meant to be just as reprehensible an act as the white man’s oppression despite somewhat warranted action.

That message is wholly conveyed at the end of the film, though, ending with Jimmie’s execution. Unfortunately, Jimmie hasn’t won a battle; the Aboriginals are still oppressed, he has now been doomed, and his uprising was easily quelled. But Schepisi has a message that violence is not the answer, because Jimmie has shown that he’s exactly the type of feral creature as the white people stereotype him. The Chant of Jimmie Blacksmith is a harrowing, frustrating, and sad film, but its moral quandaries elicit a lot of ethical questions from the audience; that’s exactly the type of film Schepisi strove to make, and it’s especially ironic that it was banned during the UK’s video nasty craze.

The Chant of Jimmie Blacksmith is often exceedingly violent; its most infamous scene, when Jimmie and Tabidgi slaughter women and children, is not gory for the sake of it but a very realistic depiction of death and cruelty. Likewise, the later scene when Jimmie is shot in the face is quite disturbing.

Quite a bit of sex and nudity here from both males and females, although most of it is not in any way titillating.

Umbrella Entertainment has released The Chant of Jimmie Blacksmith on Blu-ray with a good 1080p transfer of the film. The video quality can be a bit chunky with some heavy grain presence and some loss of clarity, but for the most part this looks very good and certainly a step up from previous DVD releases. Colors are well-maintained and dark scenes do not have any crushed blacks. Overall, despite a few fuzzy scenes The Chant of Jimmie Blacksmith looks great on this new release from Umbrella.

This Blu-ray contains a DTS-HD Master Audio 2.0 track that sounds quite good with no real issues or flaws. English subtitles are also included which are recommended due to thick accents and Aboriginal dialogue.

Umbrella has loaded this Blu-ray with extra features with a few new ones and some old ones ported over from previous releases. There’s an audio commentary with Fred Schepisi who does go quite in-depth about the film; he also provides a short introduction to the film if you choose to watch it. Also newly included is an interview with both Schepisi and Ian Baker in different settings, both of them discussing their film careers and in some detail their work on The Chant of Jimmie Blacksmith (about one hour). A quick vintage news segment on the film is also included for some archive footage, and some other old features include a 30-minute making-of documentary on the film, a 25 minute interview with Jimmie himself Tommy Lewis, and interviews with cast and crew on set about the film. Also included is a Q&A with Fred Schepisi and Geoffrey Rush at 2008 Melbourne International Film Festival.

A lengthy still gallery and theatrical trailer round out the extras on the disc; the package includes reversible cover art that is the same except it gets rid of the large rating on the cover.

This is a massive edition for The Chant of Jimmie Blacksmith, and anyone interested in owning this historical classic will definitely want to pick up the Umbrella copy. Certainly recommended for viewers of cult film.