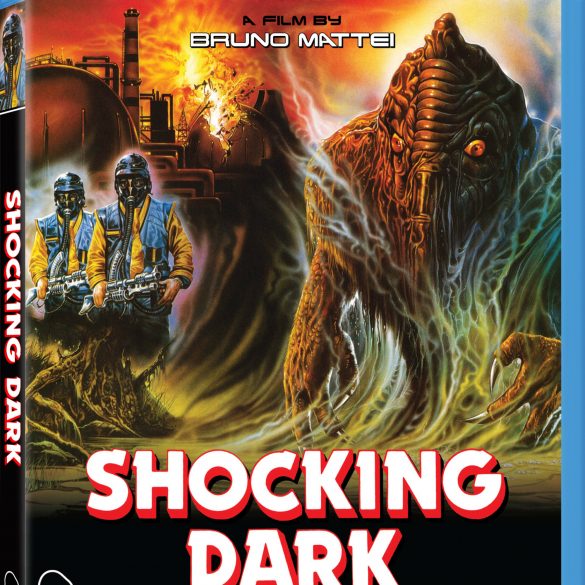 Shocking Dark Blu-ray Review (Severin Films)
Shocking Dark is a straight ripoff of Aliens and The Terminator with precious little to show for it besides a hilariously bad movie, and yet it's still worth a watch. Severin has done an excellent job on this transfer and compiling a couple new extras that give info on how the film stole its Terminator II alternate title.
Film
Blu-ray
Reader Rating1 Vote
4

The world has become a nightmarish apocalypse due to environmental catastrophe, and the people of Venice are forced to live underground. Unfortunately, there are monsters lurking in these underground tunnels, and a group of Marines – known as the Mega Force – are tasked with hunting them down and ridding Venice of this issue before the mutation is able to spread to the rest of the world. Somewhere down there, the Tubular Corporation has also been experimenting with cybernetics and they’ve created a Terminator robot. So basically Shocking Dark is Aliens meets Terminator and it really has no worries about copying both of those films blatantly.

The name that Shocking Dark was most commonly marketed as in foreign regions was Terminator II, and for good reason: though it’s not an official follow-up to James Cameron’s The Terminator and it doesn’t share any of that world, the plot itself is ultimately a ripoff of two Cameron films all packaged into one ridiculous premise. Screenwriter Claudio Fragasso (aided by an uncredited Rossella Drudi) mashed together both Aliens and The Terminator into an Italian low-budget affair that finds a group of Marines (not in space, but in underground Venice) battling a number of alien mutations and trying to avoid being placed in a slimy hive. Then, Sara (Haven Tyler) also encounters a cyborg deep in the tunnels who wants to spread the alien mutation to everyone in the world, so a time travel subplot also opens up in the last few minutes of the film.

Shocking Dark is an obvious ripoff, and for the most part, neither the screenwriters nor Bruno Mattei try to hide that fact. Almost all of the settings aside from Venice itself are designed to look like Aliens; some of the script is taken nearly word-for-word; and the plot itself progresses very similarly, although Mattei tends to focus on the low-budget action a bit more than trying to develop the characters. Cribbing from Aliens is certainly not a bad idea, but Shocking Dark doesn’t even anywhere near the budget of that film. Mattei is forced to spend too much time on wordy, expositional dialogue, or he drags scenes on for long periods of time for no apparent reason. A scene with Geretta Geretta reprimanding her ragtag group of Marines is extended for so long that even the actors look like they’re not sure what’s supposed to be going on. Another scene towards the end of the movie when Sara tries to dig Samantha (Dominica Coulson) out of the slime hive sees Mattei repeating shots and dialogue in an unnecessarily tedious vignette.

While Shocking Dark does wear on the viewer at times, its most obvious contribution to cult film history is its unintentional humor. The acting is awful, the costumes are ridiculous (are they wearing belly-baring jackets?), and the monsters look terrible – to the point where most of the time the aliens barely move, just rubber props at which the actor has to feign terror. All of these elements should add up to a horrible film that sullies the reputation of both Aliens and Terminator before it – and it does – but it’s also exactly what most people would expect from Mattei, the man who also brought us the Predator ripoff Robowar, Hell of the Living Dead, and Rats: Night of Terror. For those that loved these other films, Shocking Dark is a perfect encapsulation of terrible Z-grade horror, and it’s fun enough to warrant fans of Aliens and Terminator checking out this schlock masterpiece. It’s also fun to imagine what Cameron thought of this mutated mess of pieces from his own films.

The film is surprisingly lacking in violence considering it’s a Mattei film; mostly that’s because the death scenes are limited by budget and the alien effects. Except to see strangulation and a lot of people thrown from high up, but otherwise it’s kind of a letdown.

Also a letdown because there is none. I was expecting at least a Sigourney Weaver-esque buttcrack scene.

Severin Films has released Shocking Dark with a 2k scan of the director’s cut negative. The film has a couple of early problematic scenes with some heavy grain (probably due to damage to the negative itself) but it quickly sorts itself out, looking quite good with a limited grain layer and a good color balance. Severin has managed to make the lurid red sequences issue-free as well, which was most likely no easy task. The film does have a bit of damage here and there with some burns and debris, but otherwise this 2k scan is shockingly good. Stick around for the puns.

Since Shocking Dark was released to foreign markets and never really got a US release, Severin has included a number of different language tracks on this release. All of them are DTS-HD Master Audio 2.0 tracks, and the languages include English, Italian, German, Spanish, and Chinese. There’s relatively no change to the quality of each besides the dubbing which can vary in its volume, but overall there are no problems here and Severin has done a great job compiling all of these different audio versions – because you never know when you want to watch the Spanish version of Shocking Dark. English subtitles are also included.

Shocking Dark gets a couple of new interviews here. The first is part of the same interview session with Claudio Fragasso and Rossella Drudi as featured on Zombie 3 and Zombie 4; they don’t spend as much time (13 minutes), but Drudi goes into detail about the request for a Terminator-esque film and how she was basically asked to copy parts of it wholesale (like Sara’s name being stolen from Sarah Connor). It’s a very informative watch. The second interview is a short sequence with Geretta Geretta who basically goes through a lot of her past cinema history before talking more specifically about Shocking Dark (she says at one point it was Shocking and a color, like Shocking Pink). It’s another great Q&A to watch. Alternate Italian credits are provided, and of course the theatrical trailer.