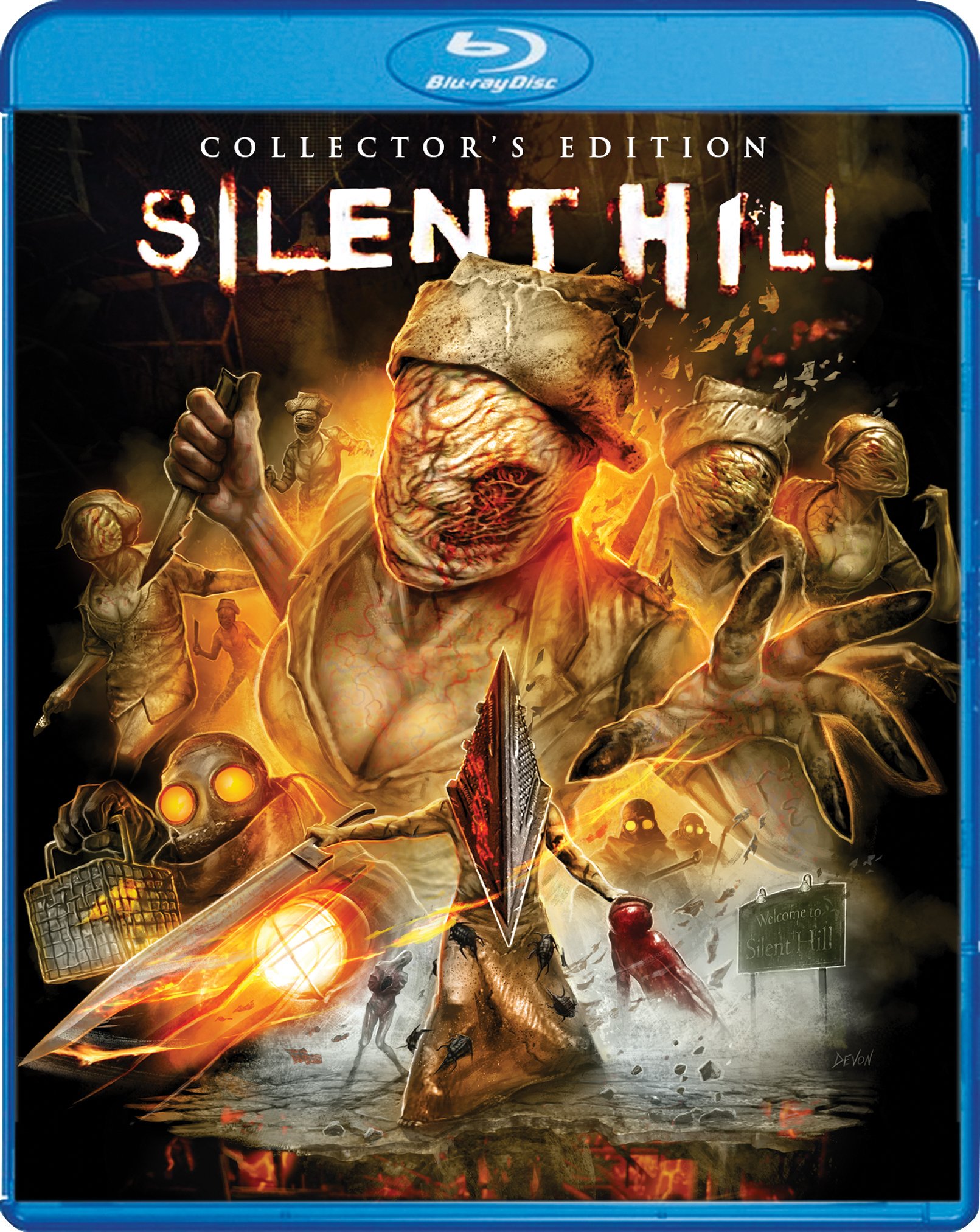 Silent Hill is a fun, nightmarish film and Scream Factory has given it definitive treatment with this Collector's Edition.
Film
Blu-ray
Reader Rating1 Vote
4
Buy
Amazon

In 2006, director Christophe Gans was finally able to create his own vision and adaptation of the long-running Silent Hill video game series. The game had already had a number of sequels by the time the film came around, allowing Gans to draw from a variety of material when attempting to craft the psychological dread of the game and infuse it into a feature film. Unlike Resident Evil –  which released four years previously and focused heavily on action rather than the survival horror of its own inspiration – Silent Hill carefully treads the fine line between movie and game, adapting core elements of the series and taking liberties explaining the nuances and metaphors behind each monstrosity found in the titular ghost town. As Gans mentions in his interviews, it’s spectacularly difficult to work with something that has vocal fanaticism behind it, but Silent Hill does manage to evoke the same sensibilities of being alone and trapped in the expansive horror game.

The film follows Rose Da Silva (Radha Mitchell) after she takes a journey to Silent Hill with her daughter Sharon (Jodelle Ferland) to find out answers why Sharon is so attracted to this ghost town that was abandoned after coal fires engulfed most of the city. Once Sharon gets lost, Rose must follow various clues to figure out where she went, which takes her through a nightmare journey filled with burnt baby things, a limbless entity, a giant guy with a pyramid for a head, and sexy but faceless nurses. It also establishes a religious cult and some heavy Lovecraftian symbolism as it tells the story of one little girl’s vengeance on an entire town and hate’s ability to transcend realities.

Silent Hill truly is a surrealist nightmare, and Gans has done a good job attempting to translate the game’s monsters into film versions. Relying partially on CGI and also physical special effects, the whole scenario plays out very much like a video game – there’s very little buildup or characterization, and the audience – along with Rose – are thrown into the world of Silent Hill without much explanation. This means that development seems stunted, with Rose specifically becoming a strange everywoman character who never really questions the otherworldly things she’s seeing. Also like a video game, Silent Hill has a tendency to throw one event after the other at the audience as Rose runs throughout the town. It means that much of the two-hour runtime is filled with random encounters that only get explained at the very end of the film thanks to a Super 8 flashback sequence that spells out the entirety of the metaphor.

Despite a few missteps – namely Gans’ refusal to allow the audience to piece things together themselves rather than offering a very explicit narrative voiceover to tell us what to think – Silent Hill conjures up some excellent scares and creative imagery. The CGI doesn’t always work, and a few sequences look particularly dated – CGI blood being the most egregious – but Gans’ love of the video games helps add some significant weight to his monsters. Red Pyramid’s presence is formidable thanks to practical effects, and the accordionized janitor truly looks spooky crawling out from a grimy, infected bathroom. If you’re looking for good storytelling, Silent Hill doesn’t really have it; but it is a great trip through some creatively malevolent stuff, all wrapped up in a downbeat ending. Take a trip to Silent Hill and I don’t think you’ll regret it.

Scream Factory has released Silent Hill as a Collector’s Edition Blu-ray with two discs. The first disc contains the feature film itself along with a theatrical trailer and a new audio commentary from cinematographer Dan Laustsen. As for the transfer, Scream has decided to utilize the Christophe Gans-approved HD master featured on a previous French Blu-ray rather than Sony’s notably murky and poor quality transfer from their previous Blu-ray release. The results are quite good, since the French master was easily the better of the two recent releases. The film still does contain a considerably dark, grungy atmosphere, but this Blu-ray manages it well. There’s no softness or debris to be found, and ultimately this is a really good scan of the film that is able to navigate both the intense dark scenes and filtered bright lighting that distinguishes between the two dimensions.

Audio is presented in both DTS-HD Master Audio 5.1 and 2.o, and I didn’t really notice any issues except for some slight volume fading on the 5.1 during choice dialogue. It’s not a prevalent problem, though, and overall this does utilize the atmospherics of the satellite speakers to good effect. Also included are English subtitles.

The second disc contains the bulk of the extra features, which includes over three hours of new interviews. Interviews with Christophe Gans are split into three segments, talking about his past work, inspiration for Silent Hill, and the actual production. This is about an hour itself. An interview with Jodelle Ferland lasts about 25 minutes and she discusses her past work as well as her experiences on set (what she can remember). Roberto Campanella, who helped with choreography as well as playing the janitor and Red Pyramid, discusses his dance background and how they accomplished both feats – standing on stilts for Red Pyramid, using greenscreen effects for the janitor. This lasts about 36 minutes.

Finally, a two-part interview with special effects artist Paul Jones takes up another hour. He discusses his work on previous films like Nightbreed and Hellraiser 3, then goes into specifics about Silent Hill – the prosthetic effects for the nurses, how they created the barbed-wire janitor, and more. It’s a great watch and gives a lot of detail.

Finally, this release also collects the previously-available making-of featurette split into six parts, another short vintage making-of featurette, on-set interviews and footage, and still posters and galleries. Surprisingly it does not include the film commentaries from Gans and some of the other French disc extras.

This release of Silent Hill from Scream Factory has all you need – the better transfer available as well as a host of extras that will keep you busy for hours. If you’re any fan of Silent Hill, pick this up.