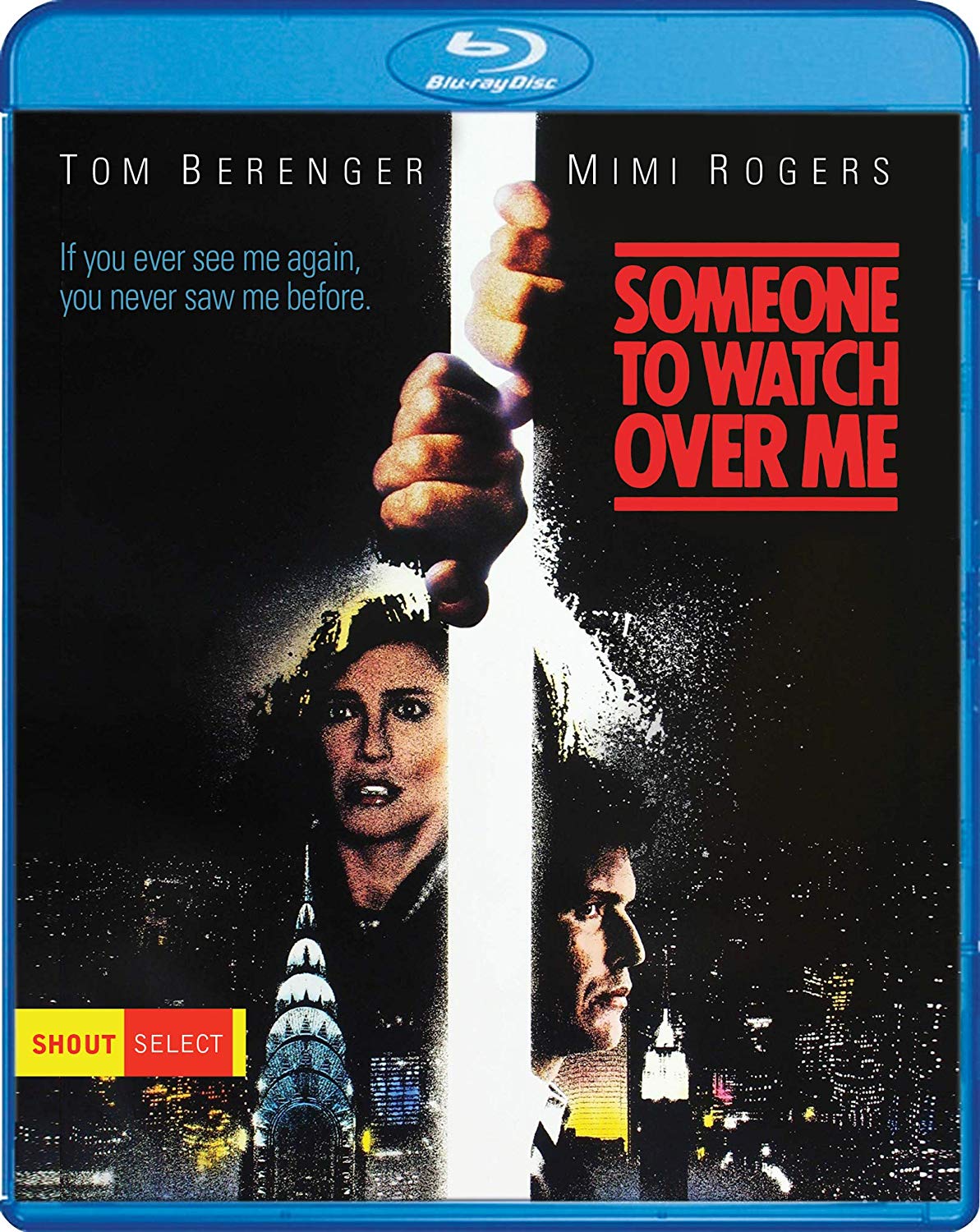 Someone to Watch Over Me Blu-ray Review (Shout Select)

Someone to Watch Over Me is a sultry, steamy crime drama that emphasizes a romantic love triangle. Shout Select's Blu-ray has a great transfer, but a little light on extras.
Film
Blu-ray
Reader Rating0 Votes
4.4
Buy
Amazon

By 1987, Ridley Scott had already directed some of his most defining films: Alien, Legend, and Blade Runner were all somewhat revolutionary in their own respective ways. Following up those titles was Someone to Watch Over Me, a film that, from its title, seems to indicate a storyline structured around the famous song, originally written for the musical Oh, Kay! but made popular by a variety of singers throughout the years including Ella Fitzgerald. Despite that tune’s tale of romance, Someone to Watch Over Me interprets the idea a bit differently: there’s still a love story, but it’s hindered by a triangle of married people and a killer that’s targeting a woman who witnessed him murder his partner. Part unrequited romance, part smoky ’80s noir, Scott’s crime drama explores the tricky aspect of relationships that get caught up in adrenaline-fueled lust, all set to moody saxophone jazz and backlit settings.

Tom Berenger stars as the protagonist Mike, an up-and-coming detective starting his first job in Manhattan. On his first day he gets assigned a job protecting Claire (Mimi Rogers), a wealthy elite who witnessed her friend’s murder at the hands of infamous criminal Venza (Andreas Katsulas). Since she’s the only one that can finger him for this murder, Venza’s out to get Claire – and due to her class, the police assign 24-hour surveillance. Mike ends up with the night shift, and a steamy love affair arises despite the fact that both of them are in committed relationships. Once Mike’s wife Ellie (Lorraine Bracco) finds out, things get even worse when Mike makes mistakes and Venza gets close to his own family.

Someone to Watch Over Me has a penchant for style, with Scott’s direction highlighting the grimy elements of downtown NYC in the late ’80s quite well. The effort is certainly rewarding: the film’s themes explore the juxtaposition between Manhattan and Queens. For Mike, he’s getting out of the slums of Queens (and with it, drifting apart from his wife) to spend most of his time in a posh Manhattan suite thanks to Claire. And Claire experiences the seedier side of her safe life after witnessing the murder, an experience that might not be unfamiliar to many people living in Queens. This presents a truly compelling love story between Mike and Claire, both caught up in the passion of the moment due to a shared bond because of danger.

It’s important to note that screenwriter Howard Franklin doesn’t attempt to minimize Mike and Claire’s infidelity. Someone to Watch Over Me deals with it head-on, and both Berenger and Rogers display a great range of emotion throughout. They both have a chemistry, but their knowing regret about what they’re doing makes them much more sympathetic to the audience, even after Ellie finds out about the affair. It’s clear that what Mike and Claire are doing isn’t right, but it’s also somewhat tragic – the film subconsciously asks the audience to interpret whether human beings can love two people equally at once, and what they would do about it if that occurs. Berenger, Bracco, and Rogers are all equally terrific in this triangle, and Scott leaves us with a sad ending about unrequited love and flares of passion that get extinguished prematurely. Maybe it’s just that sexy saxophone that’s making me steamy.

You’ll notice that I haven’t even talked about the actual crime element of this drama, and that’s mostly because it’s only secondary to the romance. In truth, the Venza scenes are a lot less compelling because that subplot is a little too generic for its own good. The script doesn’t even dive into Venza’s motive too heavily, leaving the whole thing a bit vague. It’s more just setup for the actual love triangle, getting Mike and Claire together and getting the adrenaline pumping.

Another element that adds to the film’s overall experience is the ambiance thanks to director of photography Steven Poster. The lighting and fog effects add a mysterious hazy quality to the film, and many of the scenes are darkly lit and shot with extreme backlight to emphasize the smoky textures. The film is quite beautiful and intriguing, and every scene has something to pick out thanks to this attention to detail. It’s one of Someone to Watch Over Me‘s most remarkable features.

While this film may not be remembered as one of Scott’s best, I hope this new release helps audiences find this gem. Surprisingly tender, equally thrilling, and passionately steamy, Someone to Watch Over Me hits all of the right notes in this romantic crime drama despite a cliched action plot.

Shout Select has released Someone to Watch Over Me on Blu-ray but they have not listed any indication of what kind of transfer they are offering. The film has had a prior Blu-ray release from Sony Pictures Italia, but I haven’t been able to find much information or screenshots for that release. Thus, I can only comment on what I saw on this edition, and I can confidently say that Someone to Watch Over Me looks great with this HD scan. The film is presented in its original 1.85:1 aspect ratio, and grain is kept to a minimum with no clumpiness or obstruction. Detail is very good, skin tones are consistent if sometimes appearing a bit waxy (most likely due to the backlit shots), and the cinematography really pops thanks to good handling of smoky and foggy scenes. The film does tend to have some overly dark moments but it appears that has always been the case and was an intentional choice by Scott and DP Steven Poster. Overall this is a very solid transfer.

Audio is presented with a DTS-HD Master Audio 2.0 track, and it sounds quite dynamic with both dialogue and musical score. The saxophone and synth work sounds great, and all of it has consistent volume levels. English subtitles are also included.

One thing this Shout Select title is light on is extra features. There are two new interviews included on here. One is about 10 minutes with screenwriter Howard Franklin, who talks about some of his inspirations for the film including the song and his original intention to set the film in the ’70s. The other is with DP Steven Poster, running about 14 minutes, and he discusses some of the ways that they lit the film, like in the Guggenheim Museum, as well as how they shot the shootout sequence with the mirrors. Both are interesting discussions, it’s just unfortunate Shout was unable to assemble anything else. Even an audio commentary would have added some more depth to this release.

For fans of this film, or anyone who missed it in the past, this Shout Select title is worth owning for the transfer alone. Though it lacks extras, it’s still a solid release of a film that hasn’t really had a Blu-ray presence.

Be sure to check out our gallery of extensive screenshots from this Blu-ray.