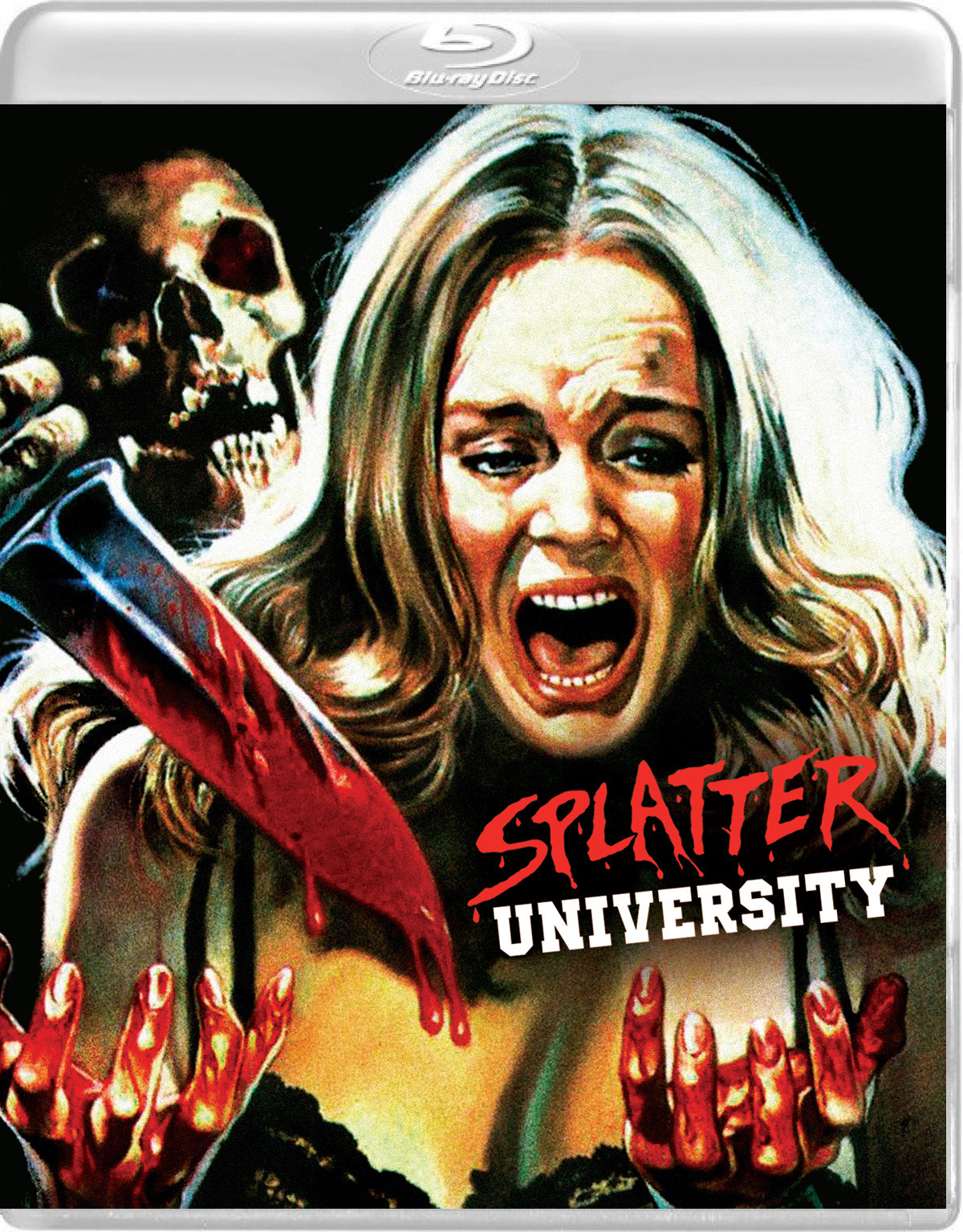 Watch out for that cross!

Splatter University is a generic but fun slasher flick that's often intentionally, and unintentionally, funny. Vinegar Syndrome has released the best Blu-ray of the film yet, and probably the most definitive that will ever surface.
Film
Blu-ray
Reader Rating0 Votes
4.2
Buy
Amazon

Writer/editor/director Richard W. Haines is probably most recognized for his work on the Troma classic Class of Nuke ‘Em High, but his directorial debut came in 1984 with the slasher trash picture Splatter University. Also known as Campus Killings in its cut UK iteration, Splatter University tells the story of a new sociology professor, Julie Parker (Forbes Riley), who begins teaching at a religious college led by Father Janson (Dick Biel). After Julie learns about the school’s storied history – chiefly, the murder of the previous woman in her job – she begins to suspect that her new beau Mark (Ric Randig) might have something to do with it.  And then even more murders plague the school after many of Julie’s students wind up dead.

The film begins hilarious brevity – a mental hospital escape in the past signifies that Splatter University‘s killer is obviously deranged and on the loose, then a time jump brings us to the murder of the school’s previous sociology professor, and then another time jump puts us in present day with Julie. It’s a whirlwind of happenings all at once, with Haines’ tongue-in-cheek writing clearly not interested in actually exploring any of the film’s own sociological elements. Instead, Splatter University works through a series of common slasher tropes, including crappy teen characters, a naive final girl, and a motive that is easily explained away as a product of insanity. Haines’ story is about as basic as it can get.

However, the intentional and sometimes unintentional comedy elements of the film give it an alluring flair. Riley is certainly playing it straight as the final girl character, truly miffed that she’s a horribly inexperienced professor dealing with a lot of dirtbag students. And the students themselves – including recently pregnant Cathy (Kathy LaCommare), fratboy Tony (George Seminara), heavily-permed Doreen (Joanna Mihalakis) – all have their fun quirks too. Notably, Splatter University was originally a very lean 60 minutes before Haines went back to shoot some student-only scenes, and the seams can definitely be seen; none of these additions to the film add any meaningful content except to pad the runtime and add a few laughs along the way.

Still, Splatter University does have a number of surprising elements, including a healthy, blood-tinged body count and finale that foregoes the usual slasher film conclusion that I won’t spoil in this review. Splatter University isn’t the best slasher of its era and it’s certainly not very well-made, but it does have a charming quality to it that should appeal to fans of SOV horror and Troma selections from this time period.

Vinegar Syndrome has given Splatter University a new Blu-ray release with a new scan of the 16mm camera negative. It’s important to note that Splatter University has most likely never looked great due to low budget and its 16mm quality, but Vinegar Syndrome has done quite a good job restoring the film for its new presentation. Clarity is excellent, color timing is consistent with a brightened and less yellowish hue compared to 88 Films’ prior Blu-ray release, and grain appears rather healthy despite a few extreme instances, most notably in the first few minutes of the film. Occasional debris and lines make their way into the film, including a couple serious scenes containing reel damage, but otherwise this seems like an improvement over past releases of the film.

Audio is presented in a DTS-HD MA mono track; the range and dynamism isn’t great but this is more likely due to the original audio recording itself. One can note echo in hallway scenes and occasional muffling from poor recording of dialogue, but this is no fault of Vinegar Syndrome’s and they’ve done the best they could with the source. English subtitles are also included with a few inaccuracies.

Extra features on this disc include two new audio commentaries, one with director Richard W. Haines and Amodio Giordano and another done by The Hysteria Continues. It’s important to note that while some of the Haines commentary was included on 88 Films’ disc, this has some added dialogue spliced in to fill up the running time. Another audio-only addition to the features, though not played over the film, is an interview with composer Christopher Burke, who discusses his body of work in detail including Splatter University, Blue Vengeance, Shocktroop, and more. Unfortunately, the audio volume on this interview did seem to fade in and out throughout for me, but I haven’t seen any other mention of it for others.

Also included are HD trailer and TV spots, a still gallery, radio spots, a script gallery of the original script, and the theme song played over the title card. The package itself does come with reversible cover art as well, and an accompanying DVD version.

Vinegar Syndrome has released the best Blu-ray of Splatter University so far, and it probably won’t get better than this. Fans of bad ’80s slashers will definitely get a kick out of the film, and the added extras and solid transfer make this worth a look – though you may want to check out the movie first before blind buying.