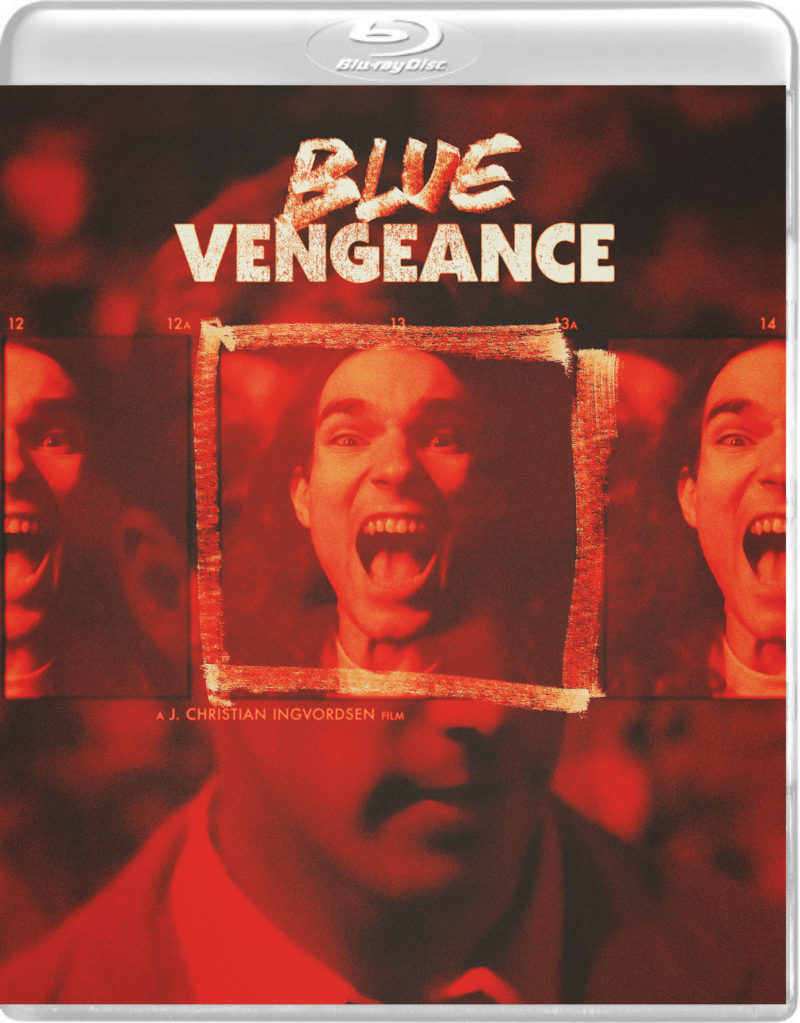 Hardened NYC cop Mickey McCardle experienced a traumatic police chase when he accidentally shot his partner while pursuing the Mirror Man serial killer. Now, Mirror Man has escaped a mental asylum and has come back to murder the three members of a heavy metal band who have since disbanded; their music heavily influenced Mirror Man’s barbarian-esque obsessions, and he now lives in a fantasy land of medieval killings in the name of SATAAAAAN! McCardle is joined by metal show photographer Tiffany O’Brian, and together their lives fall apart as Mirror Man continues to destroy everything they love. Will McCardle get… blue vengeance?

J. Christian Ingvordsen’s 1989 Blue Vengeance is a cop drama with a slasher twist, and I may be exaggerating just a bit when I compare it to something like The Silence of the Lambs. However, Ingvordsen’s film is a look at police life in a dingy ’80s NYC along with cultural resonance during this time period, most notably the prevalence of heavy metal genre music and its extreme, sometimes Satanic lyricism. The film’s main antagonist, Mark Trax (John Weiner, who also writes), is inspired by the work of a disbanded metal group that presumably had just one big hit – the oft-used “Warriors of the Inferno” – who has compiled his own fantasy out of the storytelling, re-enacting those elements in his murders and killing off the band members when he realizes they don’t live the themes of their artistry.

Blue Vengeance is far from perfect – it alternates between plodding exposition and fast-paced action sequences, and its writing is quite shoddy in parts. But the heart of the film is actually quite entertaining, certainly a product of its time period with more than a few memorable moments elevating it to cult status. For example, the finale features a motorcycle-vs.-bicycle jousting sequence – it doesn’t get much more tensely cheesy than that. Ingvordsen’s direction and the limited acting ability on display allow Blue Vengeance to slip into over-the-top territory, but this is a fun film and it’s clear that the production is all done out of love for genre film, both hardboiled detective cinema and more visceral horror fare (there’s a pretty disgusting disembowelment on display).

Fans of cop films and horror alike will find a lot to enjoy about Ingvordsen’s ode, though be warned: production values and budget are definitely low.

The film is not often violent but it does have its moments, like the aforementioned disemboweling scene, a few stabbings, and the finale’s beheading sequence.

None besides Garland Hunter’s torso.

Vinegar Syndrome have given Blue Vengeance a Blu-ray and DVD combo pack release with a new 2k scan from the original 35mm camera negative, and it looks quite good – especially considering the director, J. Christian Ingvordsen, gives a loving introduction to the picture quality on this disc. The film never got a widely distributed domestic home video release, so ultimately this is the first time it has been officially available, and while it does still show some flaws, these are more likely due to film damage and the quality of the film than Vinegar Syndrome’s scan. There’s a heavy grain presence that’s much more notable in some of the foggy fantasy scenes, but ultimately it’s not chunky enough to impact film clarity. Also of note is the good color timing and contrast balance. Overall, Vinegar Syndrome have done a great job with this preservation and it’s a treat to finally have Blue Vengeance well represented on home video.

The release features a DTS-HD 1.0 mono master audio track that sounds good, with no quality drops or issues. “Warriors of the Inferno” sounds surprisingly fierce and noisome. English subtitles are also included.

Besides the DVD version of the film, Vinegar Syndrome has also included reversible cover art and a slipcover if you were quick enough to purchase. The disc itself contains two audio commentaries, one with director J. Christian Ingvordsen moderated by Michael Gingold and one with actor and co-writer John Weiner. Along with that is an interview again moderated by Gingold with Ingvordsen (13 minutes) about the production of the film and some in-depth questions about making the film. Also included is Ingvordsen’s making-of featurette, with interviews with Weiner, Danny Kuchuck, Bob Gosse, and more. This is about 20 minutes long and really helps to contextualize the difficulties making the film with a low budget and shooting in NYC. Finally, Vinegar Syndrome also includes a special bonus feature film, The First Man directed by Kuchuck; it’s rough quality but does have stars Keith Bogart, Heather Graham, and more. Also keep an eye out for an Easter egg on the disc.

This is packed release from Vinegar Syndrome and certainly does Blue Vengeance a solid by giving it a nice new home video release, which it never really received. Pick this up for a uniquely ’80s cop drama, made on the cheap.