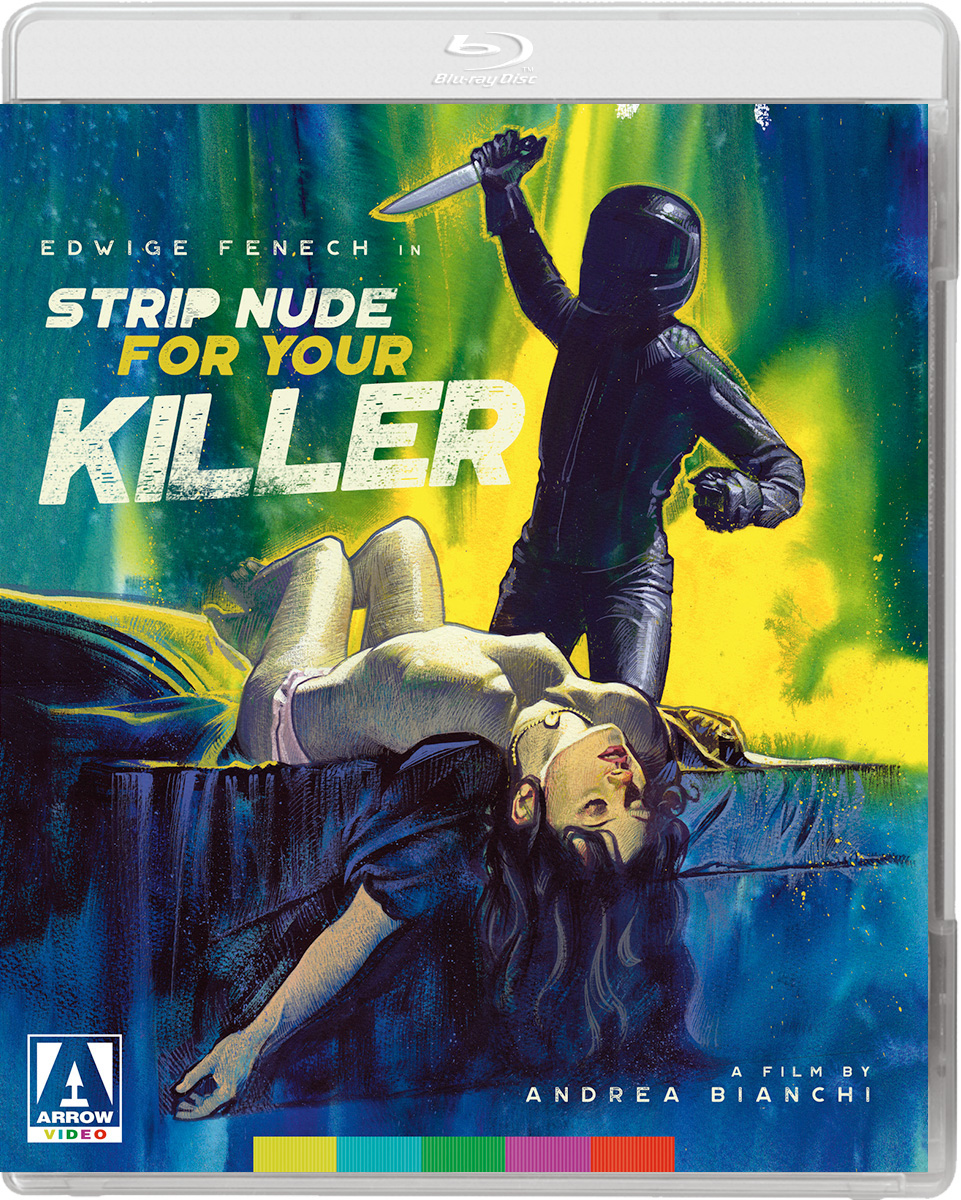 Strip Nude for Your Killer is a sleazy, nude filled fun time and the Arrow Video's Blu-ray is the best the film has looked.
Film
Blu-ray
4.5
Buy
Amazon

It’s possible that back in 1975 the Giallo genre was starting to wane. We as an audience were already treated to Blood and Black Lace, The Bird with the Crystal Plumage, Tenebrae, and Bay of Blood to name a few, so there wasn’t much more that we could view that would be new and exciting. This begs the question: what was an already established sleazy director to do? Well, spice the genre up by making the entire story revolve around gorgeous babes doing full frontal nudity. Sure, it might not be high art, but it sure worked for this hound dog.

The premise behind Strip Nude for Your Killer isn’t going to impress many people. If you boiled down the plot, which I will discuss in a quick bit, you’d realise it’s only there to get women nude on screen for an extended period. To that, I say good job director Andrea Bianchi.

The quick and dirty gist of Strip Nude is about a sleazeball photographer, Carlo (Nino Castelnuovo), who is the walking poster child for sexual harassment, getting roped up in a bunch of murders being committed by a motorcycle helmet-wearing psychopath. The reason for the killings is slowly revealed over the quick 98-minute runtime, but the reveal of the killer lands a bit flat, with some viewers probably saying “Who?” under their breath (I know I did.) If you’re wondering what Edwige Fenech is doing in the movie, she plays another photographer who doesn’t take long to get naked and hook up with Carlo. Honestly, her role in the film can be whittled down to the nude damsel in distress, who can only be saved by a misogynistic dickhole.

Strip Nude for Your Killer is a sleazy Giallo, but what more can you expect with a title like that, from a director who brought you such classics as Naughty Teen and the amazingly bad yet titillating Burial Ground. Sure, the killer when revealed is nothing to write home about, but there are some rather exciting kill setups (with loads of nudity, some coming from Femi Benussi, who is to die for) and the film looks stylish.

Arrow Video once again nails a perfect Blu-ray, providing a solid video transfer. The included booklet says this about the transfer:

Strip Nude for Your Killer / Nude per l’assassino is presented in its original aspect ratio of 2.35:1 with Italian and English mono audio. Scanning and restoration work was completed at L’Immagine Ritrovata, Bologna. The original 2-perf Techniscope 35mm camera negative was scanned in 2K resolution on a pin-registered Arriscan. Thousands of instances of dirt, debris, scratches, picture instability and other instances of film wear were repaired or removed through a combination of digital restoration tools and techniques. The mono Italian and English language tracks were remastered from the optical sound negatives. The audio synch will appears slightly loose against the picture, due to the fact that the dialogue was recorded entirely in post production, as per the productions standards of the period. Likewise, a few scenes appear quite soft, in keeping with the limitations of the original photography and lab processes involved.

All original materials used in this restoration were accessed from Surf Film.

Strip Nude for Your Killer was previously released on Blu-ray by Blue Underground, and by comparing some shots of the two transfers (thanks to caps-a-holic for the screenshots,) we can see that Arrow Video manages to come out on top in regards to overall clarity and colour reproduction.

Strip Nude for Your Killer will never be classified as a classy Italian Giallo, but it will undoubtedly be known as a sleazy good time. Its got beautiful women baring it all and a feeling that will make you want to wash after it’s all over. What more could you ask for? Oh yeah, a fantastic Blu-ray from Arrow Video. Definitely pick this one up!

Check out our extensive (nudity-filled) gallery of screenshots from this Blu-ray.