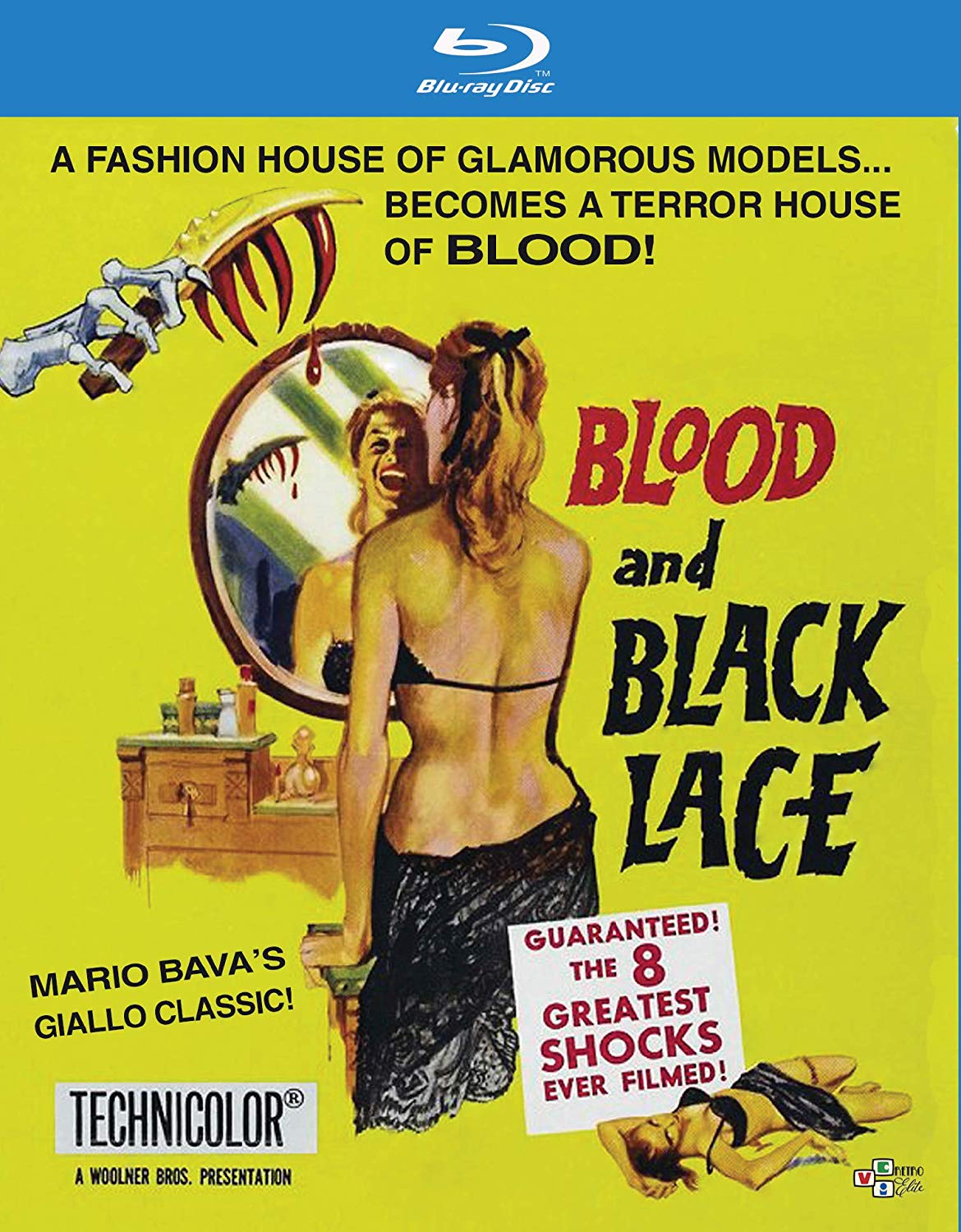 Mario Bava’s 1964 giallo opus Blood and Black Lace undoubtedly influenced many of the colorful, gothic Italian horror films of the late ’60s and early ’70s, but Bava himself was most likely inspired to make this tale of murder and backstabbing at a fashion company thanks to potboiler thrillers from Agatha Christie and Edgar Wallace, stylish noir offerings from the ’40s, and krimi films of the ’50s also inspired by Wallace novels. Still, the infusion of gothicism and noir sensibilities runs rampant throughout Blood and Black Lace, and the pairing makes for excellent cinema – not only because of the twists and turns the plot takes, but because of Bava’s barrage of antiques, set decorations, and lighting artistry.

The film has a wide cast of characters, and it doesn’t follow any one of them in particular. Curiously Blood and Black Lace is a film without a central protagonist, although the fashion house itself provides the majority of the focal point. Instead, Bava explores the various nuances of shady familiars working at the house after a young woman named Isabella (Francesca Ungaro) is found murdered in a wardrobe. There’s a lot going on in the story, most of it red herrings: Scalo (Dante DiPaolo) is using cocaine and dating the women in the house, two of whom turn up dead; the Marquis Richard Morell (Franco Ressel) seems to be living a lavish lifestyle but he’s actually in debt; and the countess Christiana Cuomo (Eva Bartok) has already been the subject of an investigation into the death of her husband in a suspicious car crash, especially after she has gotten close to fashion house owner Max Morlan (Cameron Mitchell).

Much of Blood and Black Lace‘s early moments are about setting up each of these characters and their suspicious ways, primarily during a fashion show as each character in turn does something odd to draw the viewer’s interest. And here Bava strikes with wonderful sets, colorful backdrops, and beautiful women. There’s also Inspector Sylvester (Thomas Reiner) running around, making everyone nervous with his constant Holmes-ian deductions and smarmy attitude. Fortunately, all of the exposition is bookended by various murder sequences, stylishly photographed and even more beautifully colored. Bava’s go-to tone is red, and Blood and Black Lace features a lot of vibrant scarlet imagery from blood itself (that trickle dyeing the bath water!) to spooky mannequins to scalding metal. It provides so much eye-candy that it’s hard to lose interest in this swiftly-moving murder mystery.

The deceit itself is dramatically entertaining as well; surprisingly, Bava reveals the identities of the masked killer only two-thirds of the way through the film, a nice turn of events that signals even more deception and backstabbing as the two try to off each other instead of living in harmony with their secrets. It’s also interesting to note that the underlying motive for all this mayhem is supremely simply, just a diary kept by Isabella that reveals a web of blackmail. The screenplay by Marcello Fondato seems complex due to its sprawling character studies, but Blood and Black Lace comes back to the simple premise behind murder: greed.

Blood and Black Lace is one of the most definitive examples of a giallo film, with all of the formulaic trappings. And yet even compared to some of the later offerings that would attempt to outdo the blood, breasts, and beauty of Bava’s murder sequences, it’s still most likely the best offering from that style of filmmaking. Part of it is Bava’s eye for detail on screen; part of it is the crafty weaving of noir, gothic atmosphere, and art into a beautifully mesmerizing tapestry that asks the viewer to play the part of detective.

VCI Entertainment’s Blu-ray release of Blood and Black Lace has had some controversy; Arrow Video released a steelbook Blu-ray of their own that was caught up in some rights issues with VCI. However, Arrow made a pretty significant blunder on their Blu-ray by setting their 2k scan at a 1.66:1 aspect ratio, which at the time was questioned tremendously. VCI, recognizing the issue, has now given Blood and Black Lace a new 2k scan of “original film elements” with the correct 1.85:1 ratio, and as evidenced by screenshots of Arrow’s and VCI’s releases, the 1.85:1 is almost assuredly the correct way to view the film. The framing is much better here, whereas on Arrow’s release objects and people on the far edges of the screen would occasionally be bisected.

While VCI got the aspect ratio correct, their 2k scan of film elements looks objectively worse than Arrow’s. With that said, it isn’t a terrible scan and compared to other VCI releases (The Twilight People) it does appear to be an improvement in every way from their past output. VCI’s image is just much softer than Arrow’s, with some waxy countenances, smeared grain, and overall less detail. Color timing is somewhat off as well; this one certainly has a lot of blue and purple lighting, which Arrow’s release seemed to eschew. Red tones are almost too lurid, so bright and blaring that they can hurt the eyes. It seems like contrast was tuned to the color red more than ensuring the rest of the film looked consistent, since darker scenes tend to lose detail – there’s a shot of the killer snipping something in the dark, and whatever he’s doing is completely lost in shadow.

Another odd misstep on this release is the lack of the Italian audio on the Blu-ray while including it on the accompanying DVD disc. The Blu-ray only gets an English LPCM 2.0 track which sounds thin and occasionally features distortion during screaming and higher registers, while the DVD gets both the English and Italian mixes. The Italian should have been included on the Blu-ray and it’s confusing why VCI would not want it featured on the main attraction. English and Spanish subtitles are also included; the English features more than a few grammar mistakes and misspellings, as well as strangely swapping between Italian and English names for the characters.

As for extras, VCI includes two audio commentaries as new features for this release. The first is with Kat Ellinger, editor-in-chief of Diabolique Magazine, who gives quite a bit of background about inspiration for Blood and Black Lace, defining the giallo movement, and its eventual inspiration for other slasher films. The other new commentary is with David Del Valle and C Courtney Joiner, who engage in podcast-like discussion about the film and its importance. Both are good listens.

There’s also a 27-minute look at the difference between the American cut version of the film and the European uncut version; this featurette plays both scenes back-to-back to show the changes. Ultimately the American cut is inferior in every way. Also, a 7 minute audio cut of some of Blood and Black Lace‘s theme music is included, but the quality is suspect. There are theatrical trailers, a gallery, trailers of other Bava films, an interview with Mary Dawne Arden curiously only presented on the DVD, and alternate American opening credits (both credits sequences are visually arresting). The box itself comes with reversible cover art, and it seems VCI picked the worse of the two as the main cover with its lurid yellow-green background.

In summary, VCI’s Blu-ray of Blood and Black Lace is somewhat hard to review. It certainly gets the aspect ratio correct, probably one of the most important elements in film. However, its transfer is noticeably worse than Arrow’s. The order of importance of each of these flaws is up to the viewer to decide. If aspect ratio is more important to you, then VCI’s release is certainly not a bad way to go. If picture quality and more extensive features are the most defining interest, then Arrow Video’s release is your best bet.

VCI Entertainment's Blu-ray of Blood and Black Lace nails the aspect ratio but definitely misses the mark on the transfer. Still, if the correct framing is most important to you, this is not a bad Blu-ray of this iconic giallo.
Film
Blu-ray
Reader Rating0 Votes
4.2
Hosting screenshots is expensive. If you want to see more galleries, consider donating!