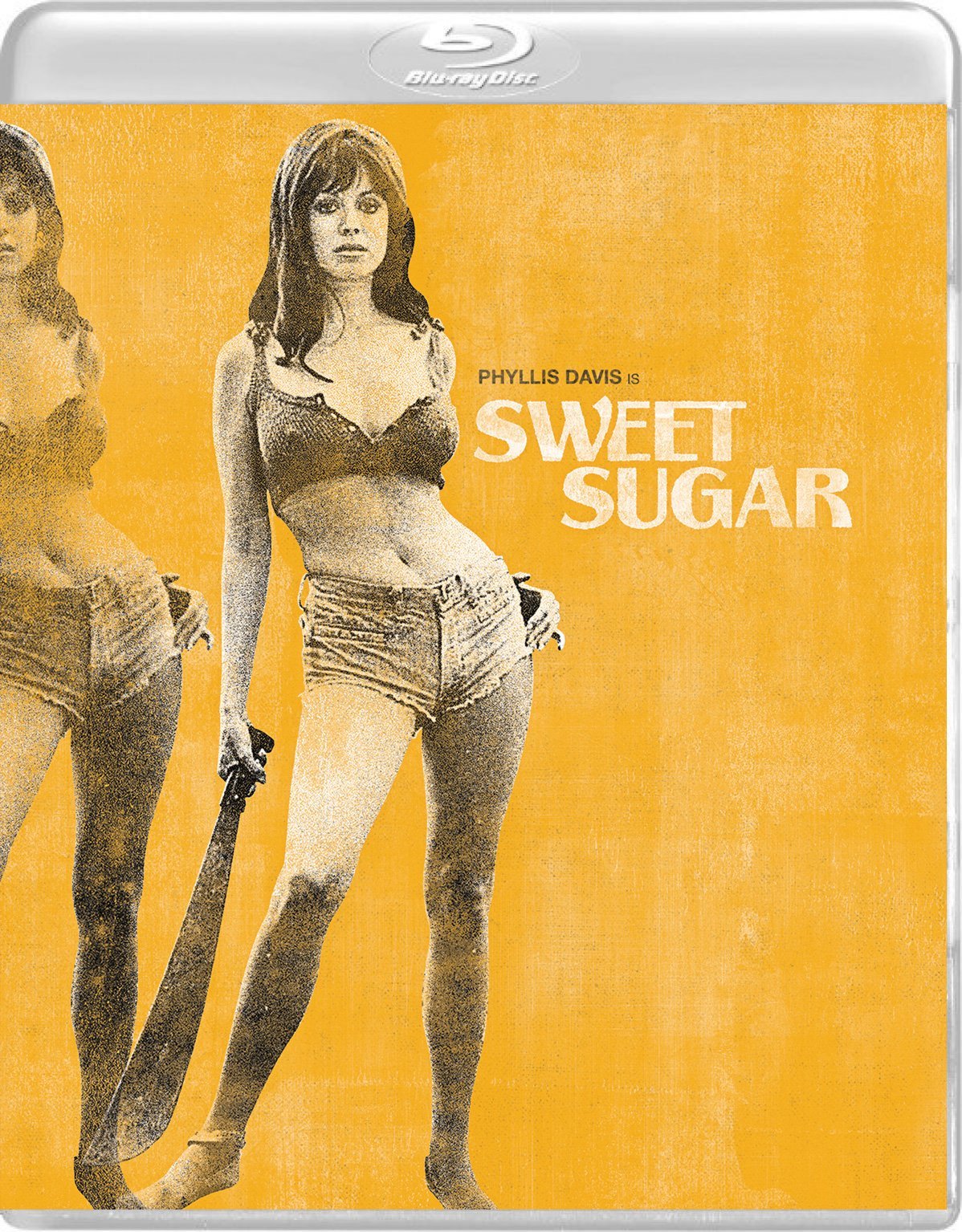 Sweet Sugar Review (Vinegar Syndrome Blu-ray)
Sweet Sugar is a unique combination of cult and exploitation themes, a fun and sexy romp that most viewers will love. Vinegar Syndrome has done an excellent job with the transfer and tracking down writer Don Spencer for an interview.
Film
Blu-ray
Reader Rating0 Votes
4.4

Sugar’s nympho-maniacal tendencies get her into trouble when she’s accidentally caught up in a drug bust. She’s sent to a prison camp to cut cane for two years, and while there she experiences love, lust, and even some supernatural forces. But her and Simone help cook up a scheme to break out of the depraved prison camp to get away from Dr. John’s weird
experiments. This is their story.

By 1972, most of the primary cast and crew on Sweet Sugar were accustomed to making exploitation films. Director Michel Levesque was following up his work on 1971’s Werewolves on Wheels; writer Don Spencer had previously worked on The Student Nurses and The Big Doll House in the prior two years; and Phyllis Davis, long before her more “classy” roles in television shows like Vega$, had starred in the sleazy Beyond the Valley of the Dolls. That’s a good track record, and Sweet Sugar also takes on a few different genres, most notably the women in prison format.

The film follows Davis’ character Sugar after she gets sentenced to two years of hard labor cutting cane in the jungles of South America; it’s a blink-and-you’ll-miss-it moment, a scene that takes place even before the film’s credits kick in. Levesque’s direction emphasizes fast pacing and often Spencer’s writing leaves a lot of exposition on the cutting room floor. The plot’s a wild ride, one that never really allows the viewer to settle into a groove – it’s either constantly pushing forward or its throwing in a lot of sexually-charged interactions between its characters, often without explanation or development.

But though the film’s strange and whiplash-inducing twists might seem poorly written, they’re actually a benefit to Sweet Sugar. As mentioned previously, the major subgenre at play here is obviously the women in prison motif, but Levesque’s direction often crosses over into Blaxploitation with a subplot involving Mojo (Timothy Brown) and Simone (Ellaraino), gritty action violence, and even some supernatural elements during a strange spirit-invoking ritual. These all add interesting and unconventional moments that work despite seeming out of place in the film’s context.

Sweet Sugar‘s pretty sexy, too, with Levesque shoehorning in a number of sex and nude scenes for the sake of it. There’s even a zany “orgasm injection” administered to Sugar, too. The film’s sleazy and outlandish elements are well-done and titillating, and anyone hoping to see some skin will certainly appreciate all of Levesque’s inserts (see Sex/Nudity area below).

Sweet Sugar is a fast-moving film that is, most of all, fun despite ridiculous scenarios and a lot of unexplained plot somersaults. Viewers who enjoy Blaxploitation, women in prison, and other exploitative cinema will find a lot to love about the movie, which combines all of those elements into one dynamic whole. And Davis, Pamela Collins, and Jacqueline Giroux are all in their sexy prime, delivering a bevy of buxom beauties to pair with the crazy pacing.

While the plot doesn’t seem like it would contain a lot of blood, Sweet Sugar surprisingly delivers with cut-off fingers, some gunshots, a lot of crazy submachine gun play, and whippings. The violence isn’t the main focus but there’s quite a bit of bright red flying around all the same.

This is where Sweet Sugar really excels. Davis’ assets are constantly on display and you get to see them more than once; Collins and Ellaraino also go nude more than once. Along with that, there are a number of shower scenes with naked extras. Even Brown and a couple of other men show some skin!

• Newly scanned and restored in 2k from 35mm interpositive

Vinegar Syndrome has released Sweet Sugar with a new Blu-ray/DVD combo pack, including reversible cover artwork featuring new art from Derek Gabryszak (which I really love). The transfer is a new 2k scan from the 35mm interpositive, presented in 1.85:1 aspect ratio, and looks fantastic – the picture has really been cleaned up, with a nice healthy grain presence and an authentic ’70s look, from color scheme to clarity. The image is crisp with surprisingly little debris besides a couple of cigarette burns in the upper right-hand corner, and I was pleasantly surprised by how great Sweet Sugar looks with this new transfer.

The audio provided is a DTS-HD Master Audio Mono track that sounds very good, with no muffled audio or drops. The soundtrack, while not very dynamic, does have the excellent Don Gere song “Sweet Sugar,” the titular tune most exploitation films generally feature. There are also English subtitles.

Besides the double-disc inclusion and the reversible cover art, this Blu-ray from Vinegar Syndrome also includes a 13-minute interview with writer Don Spencer. He talks about writing the film and the circumstances that led to his exploitation genre scripts – he was a substitute teacher and when he was struggling for work, he’d write these films on the side. He also has a genuinely great reaction to all of the ridiculous stuff that happens in the film; he realizes that these aren’t prestige movies but simply fun cinema. It’s great to see how proud he is of these works.

There’s also a theatrical trailer included here. Otherwise, no other special features, but that is understandable considering most of the cast and crew are no longer available.

This is a great Blu-ray from Vinegar Syndrome, and anyone who loves similar types of cult films will certainly find Sweet Sugar a compelling piece of candy.