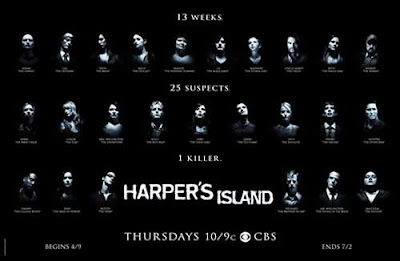 It started out slow but steady, seeming as though the characters were generic and two-dimensional with all of the stereotypes common to horror films. The first couple of episodes were rather bland; it was like being at a party where you didn’t know anyone, except at this party, everyone you don’t know is being killed off violently.

And then, a miraculous change happened. Right in the middle of the show, Harper’s Island amped up the tension and emotion, fleshing out the main and supporting characters so much that I felt pangs of guilt leaving them to die. Part of why that is comes from these last episodes – their dedication to love and partnerships between friends make it all the more saddening to know that their deaths are inevitable on this doomed island.

With that said, Harper’s Island is pretty ruthless. I thought the show might go easy on the remaining characters because of their involvement with the plot and their “realness,” but the killer took them out one by one just like their friends. This was heartless, yes – seeing a fiance killed off to protect you after he just proposed to you is probably not the nicest way to go – but I admire the fact that the show didn’t skimp on an emotional level, and feeling that pit in my chest after they were killed told me I was far beyond the intellectual level of watching the show and that I had placed myself in it, considered these people my “friends.”

There were some awkward moments in the show – these last episodes mainly devolved into a running-away montage and being the sacrifice for your friends, or disobeying orders to stay where you are and running off on your own in a wild frenzy – but to me, they didn’t distract from the surprises the show had in store for us. I did not see the conclusion coming; it really surprised me based on how goddamn likable the character was. When Trish died (come on people, if you haven’t seen it now, are you ever going to? and her death is inevitable), I couldn’t help but stifle and OMG! – there’s something both rewarding and horrifying about the death of who I thought might be a survivor.

The final episode ends with a montage of all the dead giving speeches on camera to the engaged couple for their wedding, and it acts as a fantastic concluding end. We once knew these people; we’ve come to like them a lot; and now we say goodbye, both in their fictional deaths and in reality on-screen. A touching memory.