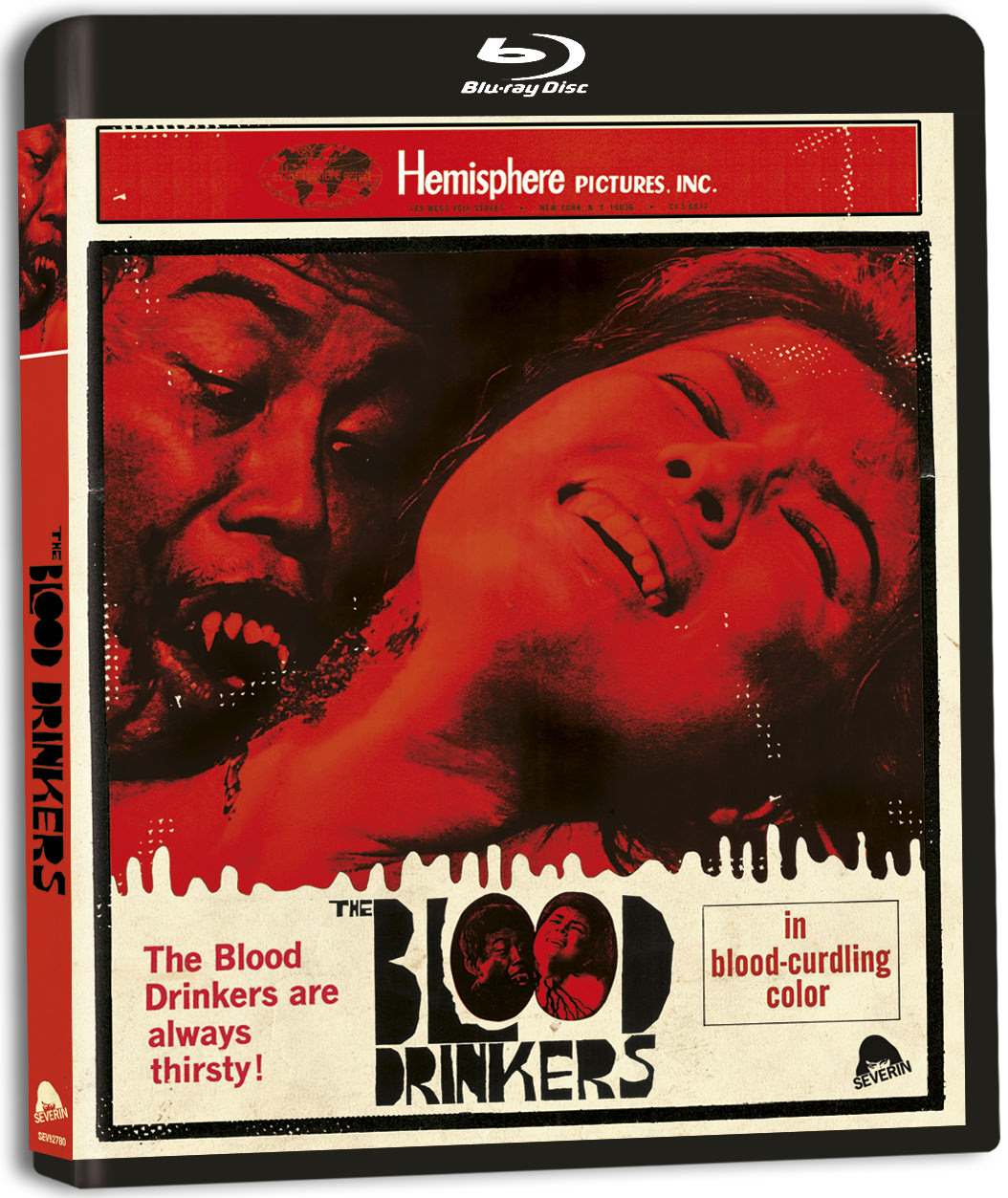 The Blood Drinkers is a fine film with interesting color tints, and Severin brings that to life with an arresting new scan and a few new features that add value to this disc.
Film
Blu-ray
Reader Rating0 Votes
4.3
Buy
Amazon

The 1964 Filipino horror film The Blood Drinkers (also known as Kulay dugo ang gabi, The Vampire People, or Blood is the Color of the Night) has the distinction of being the “first color horror picture produced in the Philippines,” and yet much of it is technically not in color. Director Gerardo de Leon shot most of the scenes in black and white for later tinting, giving various moments in the film a blue, red, or purple tint depending on the nature and context. For instance, vampire appearances, particularly with the antagonist Marco (Ronald Remy), are tinted red to indicate the presence of the creatures; more suspenseful elements get a blue tint, with the occasional purple cropping up here and there. This gives The Blood Drinkers a particularly interesting claim to fame, one that highlights the tension of each scene despite a couple of odd occurrences (like the fact that as the audience it’s not quite clear if the color is something the characters experience too or just for the film’s purposes).

Like the later Curse of the Vampires, the film follows a family of the undead led by Marco as he attempts to revive his lover Katrina (Amalia Fuentes) with the blood of various victims throughout this Filipino locale. But he mainly seeks Charito (Fuentes again), Katrina’s unaware sister, as the main source for revivification. De Leon shifts between Marco mourning and romancing Katrina to Charito, who is plagued by Marco’s appearances and her own unknowing connection to vampirism. Then cue the angry villagers, who are straight up pissed that Marco’s been taking victims from the village for his own nefarious gains.

The Blood Drinkers touches on a lot of the same elements, chief among them a very quick romance between the main character Charito and the newly relocated Victor (Eddie Fernandez). The curse aspect of the vampire’s dilemma ensures that Marco, Tanya, and moreso Charito’s mother all generate a bit of sympathy with the audience, especially thanks to Remy’s portrayal of Marco as a abusive master. De Leon’s direction is fairly slow, but there are also a number of vampire attacks and a bunch of comical appearances from a fake bat. Ultimately, The Blood Drinkers is less suspenseful than it is emotionally invested in its characters, and it becomes a soap opera of sorts until the final mob scene.

It’s most interesting and arresting elements are the color schemes, though, which do add some personality to the film. The tinting, while not always consistent, makes the film much more visually appealing than its Eastman color scenes, and Severin has done a great job restoring these to their original beauty. The tint gives even more reason for contemporary audiences to experience The Blood Drinkers.

Severin has given The Blood Drinkers a new transfer (possibly 2k scan) retaining the original intended tints. The film was previously released as part of The Blood Collection on DVD, but here they have done a much better job of ensuring the contrast during the tinted scenes is less bleary with more definition. The color sequences still look a little rough, perhaps in part due to the master itself; a few scenes in color have a blurry, soft appearance, and as a whole the tinted scenes are much more detailed. Still, the overall product looks beautiful and this is a quality scan from Severin.

Audio is presented with a DTS-HD mono track and sounds fine, with little muffling or static hisses. English subtitles are also provided.

Special features are fairly robust, porting over some from the previous DVD as well as some newly created ones for this set. The first is a 12+ minute interview with script supervisor Dik Trofeo, who talks a lot about his emotional attachment to Gerardo de Leon. The next is a short 4 minute appreciation interview with David Decoteau, who discusses his first encounters with Hemisphere films and how they helped to influence his own productions. A new audio commentary with Nathaniel Thompson and Howard S. Berger gives some great insight into the film itself; a previously available partial audio commentary (about one hour) with Samuel M. Sherman espouses more production info about the film and talks about the errors that were made when re-releasing the film (especially with color tinting).

About 28 minutes of deleted scenes without English dialogue are included too; many of them showcase a much orange-ier tint than what is in the final product, and a few color scenes are thrown in too. There is also a trailer for The Blood Drinkers and a different one for the re-issued title Vampire People, plus a radio spot.

The Blood Drinkers is a slower vampire film but its color tints add some robustness to the otherwise generic plot. Severin has done a great job handling those color schemes with the new scan, plus has added a number of new features to make this a worthwhile addition to the Hemisphere Box.

Check out our gallery of screenshots for this Blu-ray.