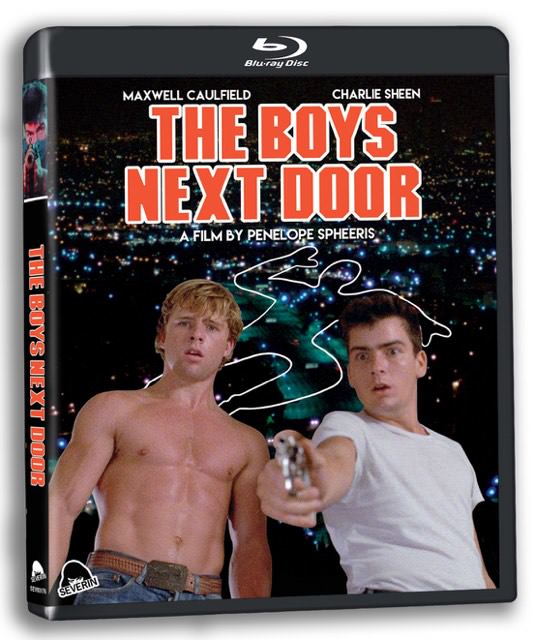 Charlie Sheen is... not the crazy one?

The Boys Next Door is a great crime drama disguised as a buddy comedy that you definitely shouldn't sleep on. And what better way to check it out than Severin Films' great Blu-ray, with an excellent 4k transfer and a number of new extras?
Film
Blu-ray
Reader Rating0 Votes
Good
Great crime film that explores some important thematic issues
Lots of new extras
Great new 4k scan
Bad
Just some occasional subtitle errors and audio distortion
4.5
Buy
Amazon

Penelope Spheeris’ third film, 1985’s The Boys Next Door, begins with a rundown of various serial killers and their pedigrees before leaving two open spaces for, presumably, the boys next door of the title. But the movie quickly transitions to a lighthearted high school buddy comedy starring Maxwell Caulfield as the troubled Roy and Charlie Sheen as his girl-crazy friend Bo before yet again trespassing through dark territory as the two graduate and go on a murderous spree through Los Angeles. Part of The Boys Next Door‘s charm is that it’s often hard to pin the film into one genre, and so it defies viewer expectations in a lot of ways. But the plot themes from writers Glen Morgan and James Wong also dive into a number of profound areas, tackling pertinent issues like sexual repression, the socioeconomic outsider, and even more contemporary incel-like culture that still proliferates today.

Spheeris’ direction is quite interesting, presenting the aforementioned buddy comedy before heading down a rabbit hole of violence. That’s no more apparent than the film’s first attack sequence when Roy beats up a gas station attendant; what is at first a fun vacation to LA for Roy and Bo before heading to work at their local factory for, in their eyes, their foreseeable future becomes a crime spree where this brutal beating unseats Roy’s more violent passions. The Boys Next Door presents characters who the viewer wants to empathize with, and then it constantly finds them in increasingly more disgusting situations. As the audience, it’s a hard position to be put in; do we root for these guys, hoping that both figure out their deep-seated issues? Or do we condemn them for making some serious mistakes?

That The Boys Next Door is able to conjure this confusion is due to Caulfield and Sheen’s acting, but it’s also thanks to the writing and the film’s sympathetic depiction of the characters’ traumatic lives. While the film never explicitly states it, the homoerotic undertones hint at Roy’s repressed homosexuality, possibly exacerbated due to unrequited love with Bo. Bo, on the other hand, is more obsessed with how the fairer sex sees him, trying too hard to overcome what other people perceive as his trashy background. Spheeris consistently incorporates outsider presence in this film, from the gay community of Los Angeles to the punk rockers strolling along the streets to the jam bands performing on corners to the astrologically-inclined Angie (Patti D’arbanville) that Bo takes home. The film is about the acceptance of those outsiders and how difficult it can sometimes be to be one – to the point where Roy struggles to understand his own importance in the world.

The Boys Next Door is a surprisingly intriguing film, one that seems to defy expectation thanks to its generic name and admittedly terrible box art. Something of a sleeper during its release, cult film fans should definitely flock to this re-release and admire the way it addresses issues that are relevant even today, combining that with some pretty brutal killings along the way. Don’t miss out on this one.

Severin Films has released The Boys Next Door on Blu-ray for the first time with a new 4k transfer of the original negative, and it’s safe to say that the film looks gorgeous. Vibrant colors, great detail preservation, and well-maintained blacks are on offer here with a medium grain scale that does get a bit heavier in darker scenes. However, there’s really no loss of depth or clarity throughout and this is easily the best that the film has looked since its theatrical release.

Audio is a DTS-HD Master Audio 2.0 track and it sounds fairly good. There are very minor instances of muffling and distortion during a couple scenes where shouting occurs (toward the end of the film), but other than that there aren’t any drops or dialogue issues. English subtitles are provided with a couple of slight errors.

Severin has compiled a number of new extras to make this disc even more worthwhile. An audio commentary with Penelope Spheeris and Maxwell Caulfield accompanies the film; there are also interviews with Caulfield, Christopher McDonald, the street performers from the film, and Kenneth Cortland. Stephen Thrower gives an almost half-hour interview about the context of the film in gay culture and its moral integrity. Also, Kier-La Janisse provides an episode of her Psychotronic Tourist for the film’s locales. A previously-recorded interview with Penelope Spheeris and Maxwell Caulfield is also included. All told, there’s over an hour of extra interviews, and Severin also provides a couple of extended scenes and the Blind Rage opening credits sequence, along with an HD trailer.