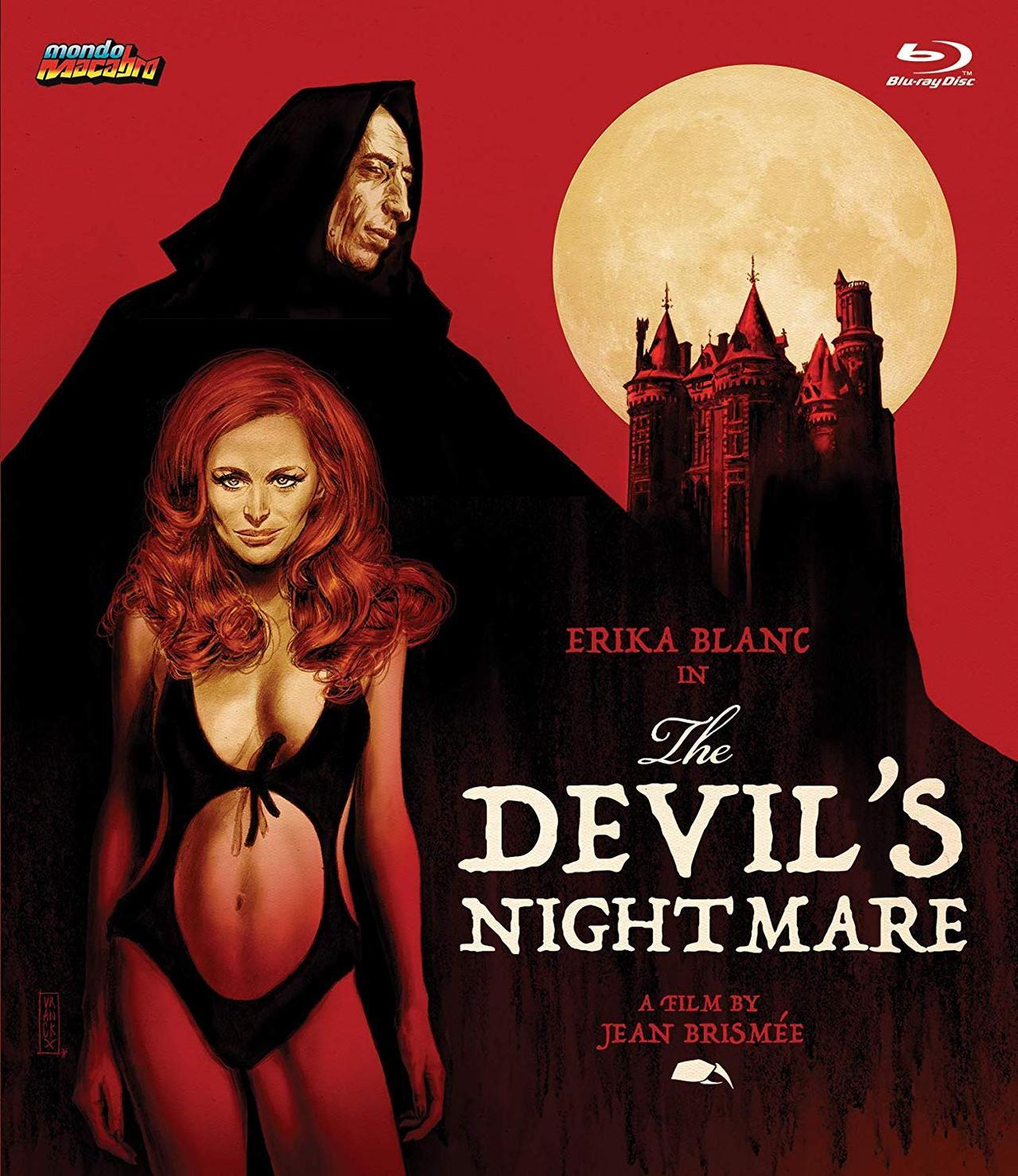 The Devil and a hot redhead come to play

The Devil's Nightmare is a great Gothic chiller and Mondo Macabro's Blu-ray is a must for fans.
Film
Blu-ray
Reader Rating0 Votes
4.5
Buy
Amazon

The Devil’s Nightmare has been known by a lot of names (Vampire Playgirls, Nightmare of Terror, Succubus, Castle of Death, The Devil Walks at Midnight, The Devil’s Longest Night), and almost all of those titles – except Vampire Playgirls – are pretty accurate to this wild Italian/Belgian co-production from director Jean Brismée. Brismée might not sound familiar, and for good reason – The Devil’s Nightmare was his only feature film, but his Gothic chiller featuring a castle, tourists, and the appearance of a cursed succubus and the Devil himself adds enough craziness to make up for Brismée’s disappearance from cinema history after the release of this title. Though rarely noticed, the film’s appealing mix of horror, eroticism, and creepy surrealist displays loosely based on the deadly sins combine for a rather entertaining creation, a slow burn that rewards as it picks up speed towards the climax.

The film’s setup initially involves the violent stabbing of a babe in a crib during the 1930s before transitioning to present day, wherein that same murdering father Baron von Rhoneberg (Jean Servais) has been trying to live out the rest of his life in relative peace at his airy castle. A group of tourists traveling via bus are forced to crash at the castle during a storm, along with a mysterious redheaded woman named Lisa (Erika Blanc) that a few of the servants seem to know; and then strange stuff starts to happen after Baron von Rhoneberg reveals that his family is cursed with all elder female daughters becoming succubi!

Brismée presents his Gothic horror with an excellent set design and beautiful cinematography – a dreary castle teeming with dark corridors, parapets, towers, and other sinister imagery. And the haunting elements of the film start to take place early on as each of the tourists settles into their temporary residences, with Father Alvin (Jacques Monseau) – or Alban depending on translation – taking center stage as the subject of the Devil’s temptation. There’s a lengthy lesbian scene that was cut from some releases and the gorgeous Blanc appearing in a number of different outfits, almost all of them revealing her stomach with various designs.

Yet it takes The Devil’s Nightmare a long time to get started. The tourist deaths don’t really start until about an hour into the film, a slow pacing that attempts to emphasize the eerie nature of the castle and explain the succubus curse (and, yeah, that lengthy out-of-place erotic scene too). Even so, once Lisa (it’s always a redhead) begins her haunting, the suspense ratchets up quickly. Brismée does an excellent job showing the two sides of the cursed young woman, even changing her fingernails from white to black in subtle detail during her transition from beatific to succubus. The spooky makeup gives her a sallow look that contorts her visage considerably, a great effect that conjures tension whenever she’s around.

The Devil’s Nightmare also circumvents the viewer’s expectations in its conclusion; apropos of the title, the whole thing really is a surreal nightmare for Father Alvin, who wakes up after selling his soul to the devil in order to save the rest of his group from damnation. And yet the Devil can’t be trusted, because the film ends on a pretty dark note. It’s a fitting end for a movie that is often hard to predict.

For fans of Gothic cinema, The Devil’s Nightmare is a must-watch. It’s a lesser known film in the genre and yet it stands out as a chaotic and rich work, one that shouldn’t be missed. 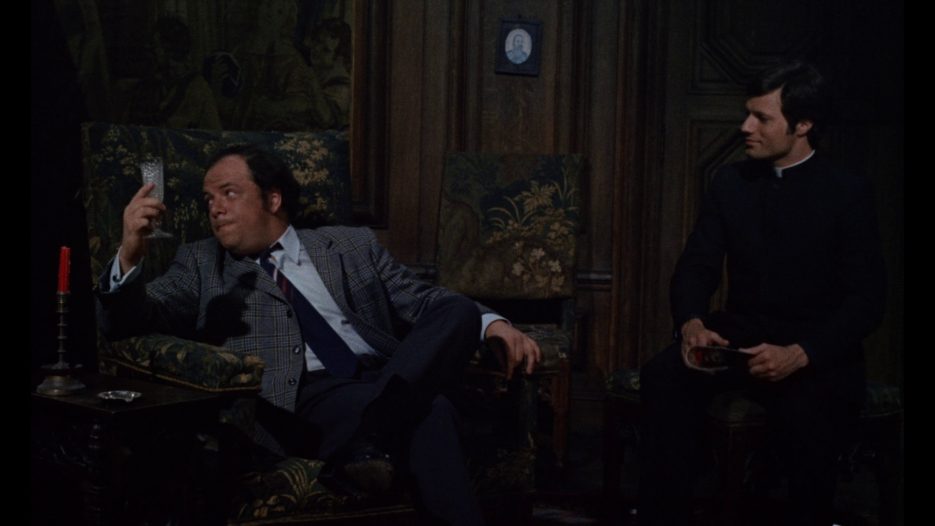 Mondo Macabro has thankfully given The Devil’s Nightmare a new release on Blu-ray with a 2k scan of the original camera negative. An initial introductory screen notes that the source was not in the best of shape and Mondo Macabro has done what they could to restore to the best possible transfer, and the results certainly show the hard work that has gone into this. Video quality is, for the most part, sharp although a few scenes do suffer from some softness. Lines and debris are sometimes present but are relatively minimal; color flickering does crop up towards the end of the film, again without much obstruction. A couple insert shots do show inferior quality, and opening stock footage has some obvious damage. Other than that, color is vibrant, grain is well-maintained at a medium level, and dark contrast is also quite good. Overall, this is a nice transfer that restores the original uncut film.

Audio is presented with both a French and English LPCM mono track, which surprisingly can only be accessed from the menu despite using the same video. The English dub is not great, but in terms of quality it is the better of the two tracks; there is still the occasional muffling, but the dialogue is mostly clear and consistent in volume. The French track does suffer from heavier muffling and occasional dips in volume, but it has a better dub altogether so viewer preference will reign here. Also of note is the fact there are English subtitles but they only correspond to the French audio; one can use these for the English audio, but the dialogue is changed slightly.

Extras for this release are surprisingly robust. A great audio commentary with Troy Howarth gives tons of information about the film, its joint Italian/Belgian production, and lots of witty banter that has come to be a staple for many cult Blu-ray releases. A new interview with Jean Brismée runs about a half hour and he touches on his life, work on this film, and how he prefers genre films rather than more arty affairs. Assistant director Robert Lombaerts gives a 22 minute interview about his work on the film including particular scenes like shooting the erotic lesbian stuff and Shirley Corrigan’s rendezvous with a snake. Finally, filmmaker Roland Lethem gives a 20 minute interview about his inspirations for his own works that include The Devil’s Nightmare. Trailers, TV spots, and other Mondo Macabro trailers are provided.

The Devil’s Nightmare is a highly recommended film, and Mondo Macabro has done a great job from the video quality to assembling some nice extras. Definitely check this one out for some bad dreams.

Check out our screenshots from this Blu-ray here.