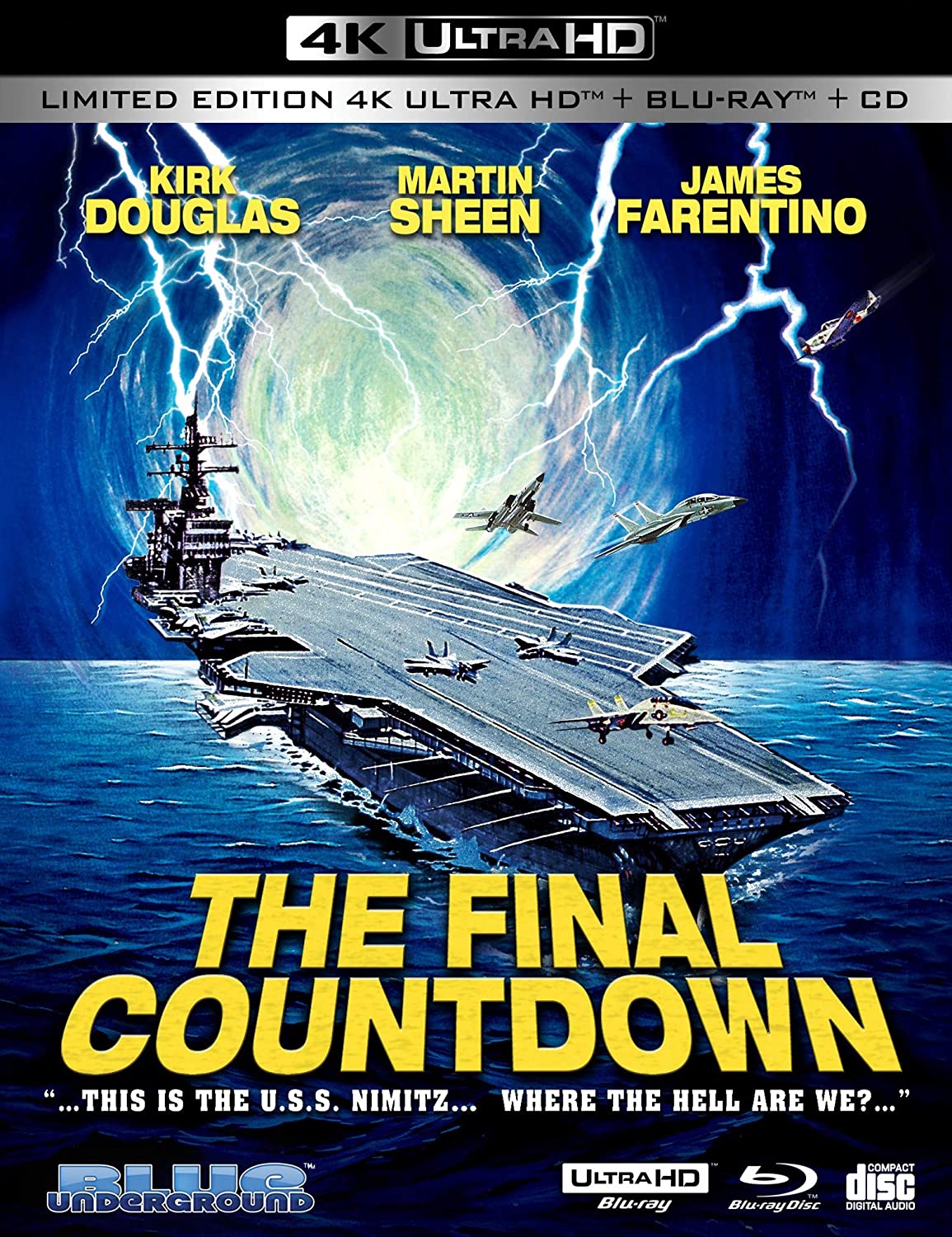 Remember all those cool scenes in Top Gun with the fighter jets taking off or landing on the aircraft carrier? Did they make you stiff as a rock like they did for me? Well, do I have the movie for you! It’s called The Final Countdown, and it’s jammed full of all sorts of rad scenes involving jets and aircraft carriers. Hell, it even has time travel thrown in to make it even more epic. Jesus, if the movie had a scene with Michael Sheen and Kirk Douglas shirtless playing beach volleyball, I don’t know what would have happened to me. Is death by orgasm possible?

The Final Countdown was released in 1980 and tells the story of the aircraft carrier U.S.S. Nimitz traveling through some sort of weird anomaly that transports the entire ship back in time to the day just before Pearl Harbor was attacked by the Japanese, Dec 7, 1941. The story isn’t grandiose, playing it rather safe and not bothering to go crazy with any time paradox ideas. There is a pretty epic air battle involving Japanese planes battling it out with F-14A Tomcats, and one moment during that scene looks to be a fairly dangerous stunt (it’s talked about quite a bit in the included special features).

When you take a step back and analyze The Final Countdown, you realise that not much happens. The ship floats around a bit, a couple of fights ensue, and that’s about it. Still, that isn’t to say the film isn’t a great time; as I mentioned above there are some excellent scenes for fans of fighter jets. Also, the acting from everyone involved is superb, which isn’t a big surprise when the cast includes the likes of Sheen, Douglas, Charles Durning, and Katharine Ross.

Blue Underground has been going back through their catalogue and updating their releases to 4K UHD and The Final Countdown is one of the latest to be released, and the results are phenomenal. I can’t find any faults with the 4K UHD release. The release also includes the film on Blu-ray, but I stuck to watching the 4K release, hence why I’m not giving you my useless opinion on the standard Blu (I’m going to go out on a limb and say it’s probably the same one from 2008, but don’t quote me on it).

The UHD includes a 7.1 Dolby Atmos soundtrack, and I don’t have the full setup to tell you how truly great it sounds, but even with my puny 5.1 setup, it sounded pretty damn awesome to me. I didn’t notice any issues, and I enjoyed the use of the rear channels during all the air scenes. The disc also includes 5.1 and 2.0 English DTS-HD options, and a French 2.0 DTS-HD option.

This latest release ports over all the special features from Blue Underground’s previous Blu-ray release in 2008, which means we get an older 14-minute sitdown with Associate Producer Lloyd Kaufman, a 31-minute sitdown with The Jolly Rogers F-14 Fighter Squadron, audio commentaries, and a boatload of promotional material. Also included are the original CD soundtrack and a collectible booklet.

Even if the story doesn’t amount to much when you sit back and think about it, The Final Countdown is an incredibly enjoyable film with lots of cool air scenes and stellar acting. Any film that includes time travel and fighter jets is going to be A-OK in my book, so The Final Countdown is a very high recommendation, and you owe it to yourself to pick up this impressive-looking UHD release. 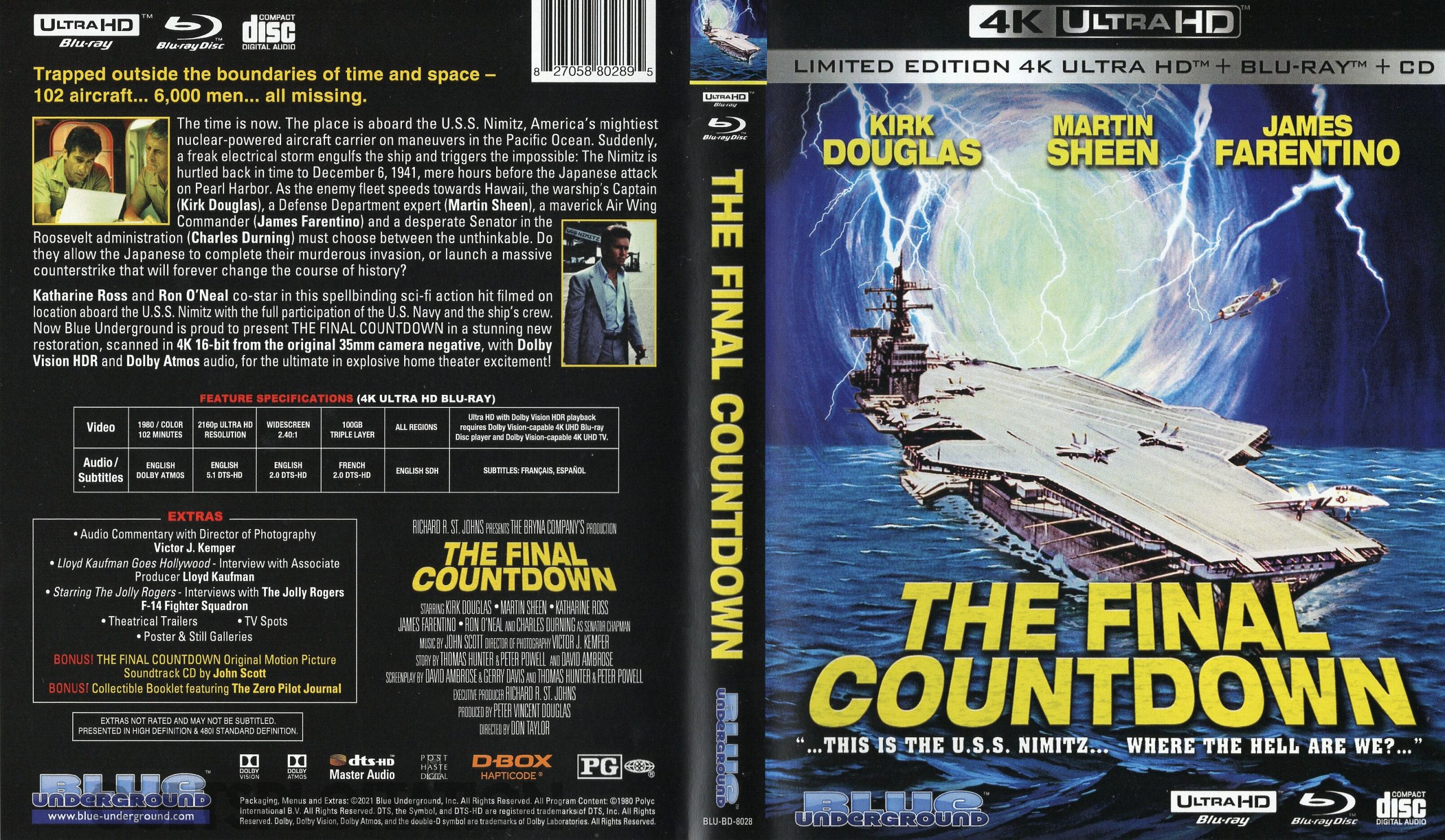