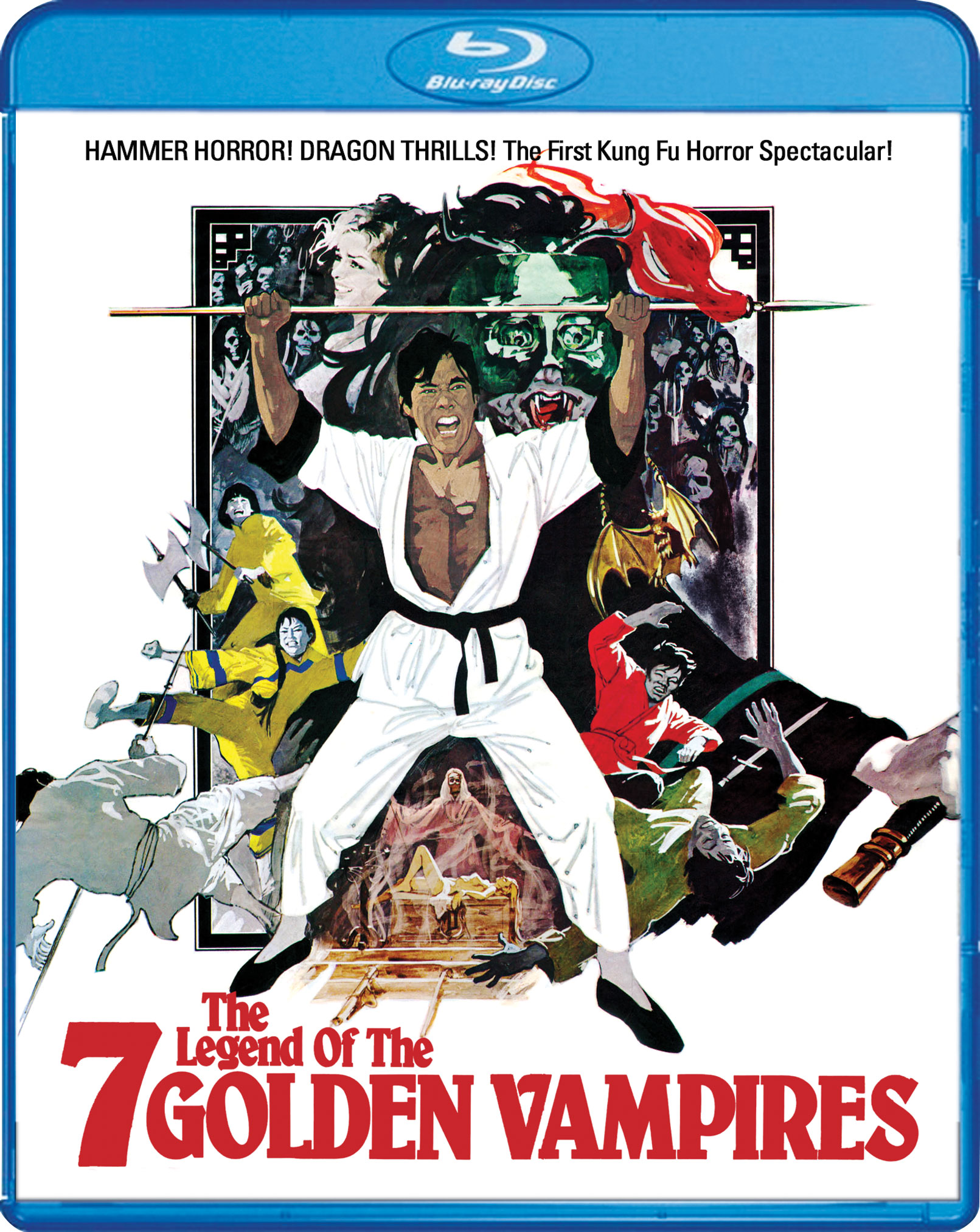 The Legend of the 7 Golden Vampires is what fans of Hammer and Shaw Brothers were waiting for, a rollicking, wacky, hopping good time. Scream Factory spews out a worthy Blu-ray release.
Film
Blu-ray
Reader Rating0 Votes
4.1
Buy
Amazon

Ever wonder what you would get if you took Hammer Films and Shaw Brothers and smooched them together until something squeezed out the other end? Well, The Legend of the 7 Golden Vampires is precisely what would be excreted. It’s got everything you can think of when thinking of those two studios:

The story for The Legend of the 7 Golden Vampires goes a little bit like this. Some time ago, the leader of the 7 Golden Vampires headed to Romania to wake up Dracula and let him know that his vampires are lazy and sleeping all the time. Dracula at first scoffs at being told this rather mundane piece of information, but soon realises he could take over the form of this guy and head on down to the rural village to train these seven golden vampires to wreak havoc on the local town, rip off women’s shirts, and hop, hop, hop. An ancestor (David Chiang) of a farmer, a farmer who said enough was enough and managed to kill one of the seven golden vampires, requests the help of Van Helsing (Peter Cushing) to head with him and his fellow brothers (also one sister) in arms to take down the vampires and put Dracula to rest once and for all! Tagging along with them is Van Helsing’s son, Leyland Van Helsing (Robin Stewart of Pacific Banana fame?), and a blonde girl, Vanessa Buren (Julie Ege) who isn’t given a backstory, but boy do her bosoms heave.

The badass group of martial arts masters, and one Vampire Killer, and one son of Vampire Killer, and a heaving blonde, head on the road and in their adventures they run amok of rival tribes of martial arts masters and the occasional vampires. Once they get to the village, they prepare to face the vampires and Dracula himself. Unfortunately, the actual fight with Van Helsing and Dracula is over before you can get excited.

The Legend of the 7 Golden Vampires is precisely the movie you would expect when Hammer and Shaw get together to make a flick. It’s got loads of random fight scenes, a coffin-load of hopping vampires attacking people with swords instead of their teeth, and of course, Peter Cushing once again putting in a reliably solid performance as Van Helsing. However, it isn’t the best vampire film around, let alone the best Hammer vampire film. Some scenes tend to drag on, and the reasoning behind what the 7 Golden Vampires are planning on doing is poorly explained. We also get a few unexpected deaths that may or may not infuriate people. I’m still on the fence with those deaths. Part of me applauds them for doing something crazy, but the other part thinks the deaths, especially one of them, were unnecessary.

Nevertheless, The Legend of the 7 Golden Vampires is, for the most part, a fun time and shouldn’t be taken seriously. And if you want to experience that fun time you can do so with Scream Factory’s Blu-ray release. The Blu-ray offers a new 2K scan of the original film elements, and for the most part the movie looks fantastic. There are times where the quality isn’t as sharp, or damage is present on the screen. It’s certainly not a perfect-looking picture, but given the age of the film, I can forgive it. Audio is presented in English 2.0 mono DTS-HD with optional subtitles in English SDH, and besides some lousy dubbing at times, the results give no apparent issues.

Extra Features for The Legend of the 7 Golden Vampires are quite bountiful. We have a new audio commentary with Author/Film Historian Bruce G. Hallenbeck, an interview with actor David Chiang (this feature was provided to Scream Factory by Severin Films), and an interview with Hong Kong Film Expert Rick Baker (no, not that Rick Baker). Also offered is the US alternate cut titled The 7 Brothers and their One Sister Meet Dracula, which shortens the runtime down to 81-minutes, adds in a bit more nudity (by repeating scenes), and changes up the soundtrack a bit. This version features a few scenes in Standard Definition. Rounding out the Blu-ray are trailers, a TV Spot and a Still Gallery.

As you can see, The Legend of the 7 Golden Vampires is a fun, utterly non-serious take on combining Hammer Gothic Horror with Chinese Hopping Vampires. The results tend to land solid, with only a few issues hopping up! (Hardy har har). Scream Factory does a commendable job putting together a worthy Blu-ray to add to your growing collection.