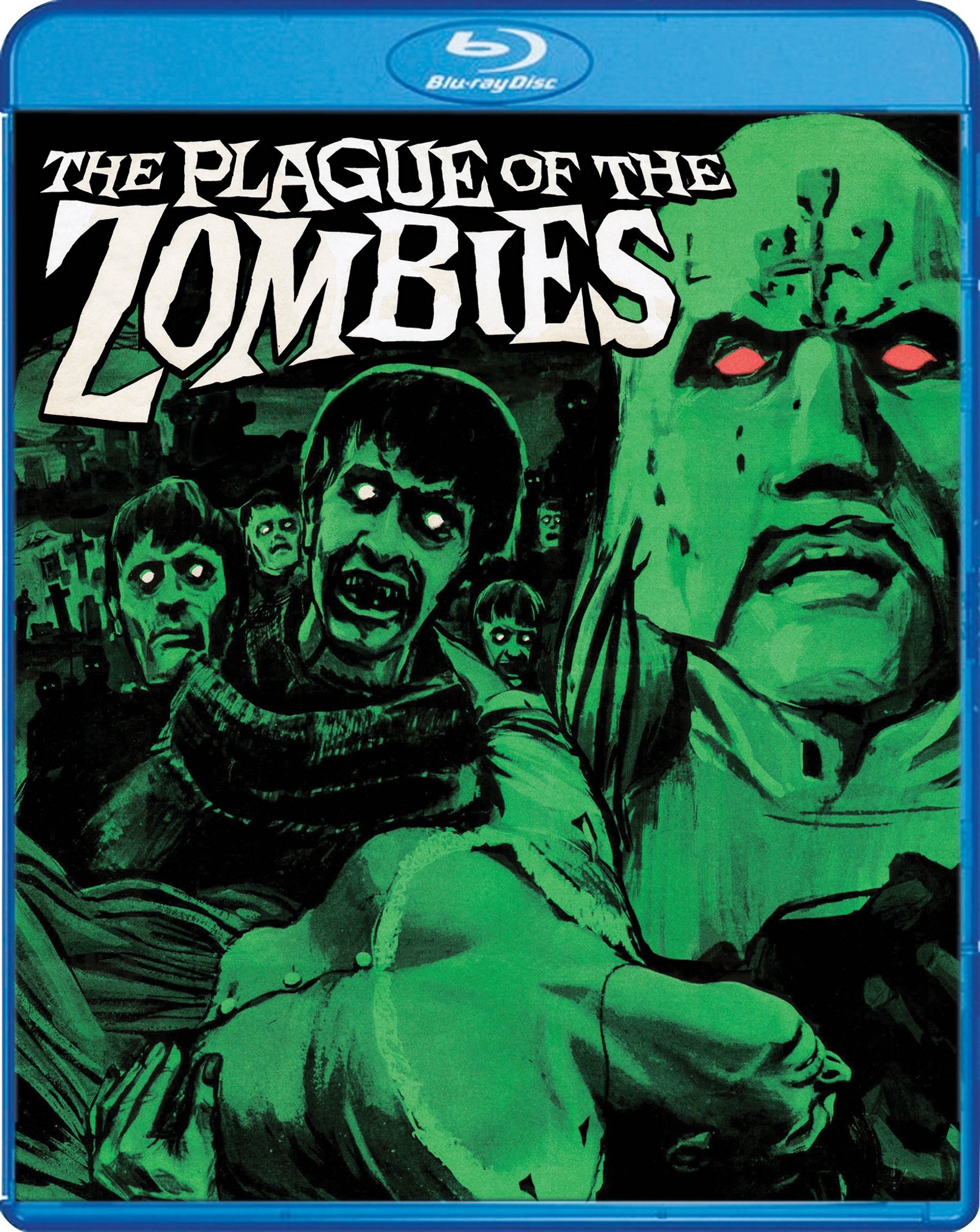 The Plague of the Zombies Blu-ray Review (Scream Factory)

The 1966 Hammer film The Plague of the Zombies cribs a lot from the classic zombie films of the ’30s, particularly White Zombie and 1943’s I Walked with a Zombie. Specifically, the similarities occur due screenwriter Peter Bryan’s use of voodoo rituals conjured by the film’s antagonist and the slave-like usage of zombies to do their master’s bidding. The Plague of the Zombies follows James Forbes (Andre Morell) and his daughter Sylvia (Diane Clare) after they are called to Cornwall to investigate the problematic deaths of many of the village’s young men; Forbes is meant to aid local doctor Peter Tompson (Brook Williams) in his search for answers, but after Sylvia becomes the main target of Denver’s (Alexander Davion) nefarious plans, the group are targeted by the mindless zombies thanks to the voodoo curse. Director John Gilling follows the previous zombie format quite closely, and even eschews Hammer’s usual nudity and crudity.

The Plague of the Zombies starts off slow, with a lot of setup done around both the Forbes’ as they arrive in Cornwall. Primary emphasis is on Sylvia, who, as the attractive new woman in town, garners most of the attention from the rest of the surviving men – including a tumultuous scene where Denver’s band of red-jacketed men gang up on her and basically threaten gang-rape before Denver swoops in for a chivalrous save. All of this is less about tricking the viewer than it is foreshadowing – explicitly – Denver’s ulterior motives. While some might decry Gilling’s direction here, making the viewer privy to Denver immediately allows Davion room to play up both sides of the character; he does both charming and chilling well, with the best example being during an eerie scene where Denver secretly extracts Sylvia’s blood in a complicated scheme.

What the film lacks in action it makes up for in its initial zombie appearance. Sylvia stumbles across the blank-eyed, blue-tinted zombie out in the woods, and it truly is a memorable, bloodcurdling moment; the zombies tend to lose their terror as the film continues to make them subservient stumbling dolts, but the first encounter is terrifying. As is the first time Forbes and Tompson uncover a grave with a missing body; the horror elements and the film’s score ratchet up the early suspense.

The Plague of the Zombies does run cold throughout its latter half, though, mostly because the zombies are given a background part once the characters discover Denver’s underground voodoo rituals in a family mineshaft. Ultimately, one wishes that Gilling spent less time on the human aspects of Denver to focus on the more monstrous treatment of zombies. Instead, the tragedy of their servitude gets lost in the overarching plot, a social commentary that White Zombie does far better.

Still, fans of classic zombie elements – ones that aren’t flesh-eating – should find a lot to like in this Hammer picture despite its tameness. There are some great effects including a beheading and lots of scarlet bloodletting, and besides Williams, the rest of the cast puts in great performances. Hopefully, this Plague spreads with this new release.

Scream Factory’s Blu-ray of The Plague of the Zombies is lacking, though. The new release is basically a reskinned version of the 2012 StudioCanal Blu-ray; it even reuses almost all of the same special features and the same transfer. Luckily, StudioCanal’s transfer was already quite good, presented in 1.66:1 with vibrant color scheme and impeccable clarity. All of the usual flaws of a film this age are missing, with great attention to removing burns and nicks. A restoration extra shows just how much love was put into this transfer, and the previous StudioCanal making-of featurette also touches on the restoration process. Similarly, the newly restored DTS-HD Master Audio Mono track has no issues whatsoever. English subtitles are also included.

As stated previously, all of the original StudioCanal extras are included on this release including the 35 minute making-of featurette, a 4 minute restoration video, theatrical trailer and still galleries. There’s also a 25 minute World of Hammer episode loosely related to The Plague of the Zombies centering on mummies, werewolves, and the living dead. Finally, Scream Factory have included two new audio commentaries on this – one with Constantine Nasr, Ted Newsom, and Steve Haberman, and another with film historian Troy Howarth. Both offer some nice insight into the Hammer universe and this film in particular, though I would argue that some of these would have been better featured as interviews than commentaries.

Overall, Scream Factory’s release is not overwhelmingly impressive considering its lack of new content and its reused StudioCanal transfer, making it difficult to justify the price for anyone who already owns that Blu-ray. However, this is a great release if you’re not double-dipping.

The Plague of the Zombies fits in well with the classic voodoo zombies of the '30s and '40s, with more blood to spare and an interesting villain. Scream Factory's Blu-ray lacks extras to make it worth double-dipping if you already own the StudioCanal release.
Film
Blu-ray
Reader Rating1 Vote
3.7
Hosting screenshots is expensive. If you want to see more galleries, consider donating!