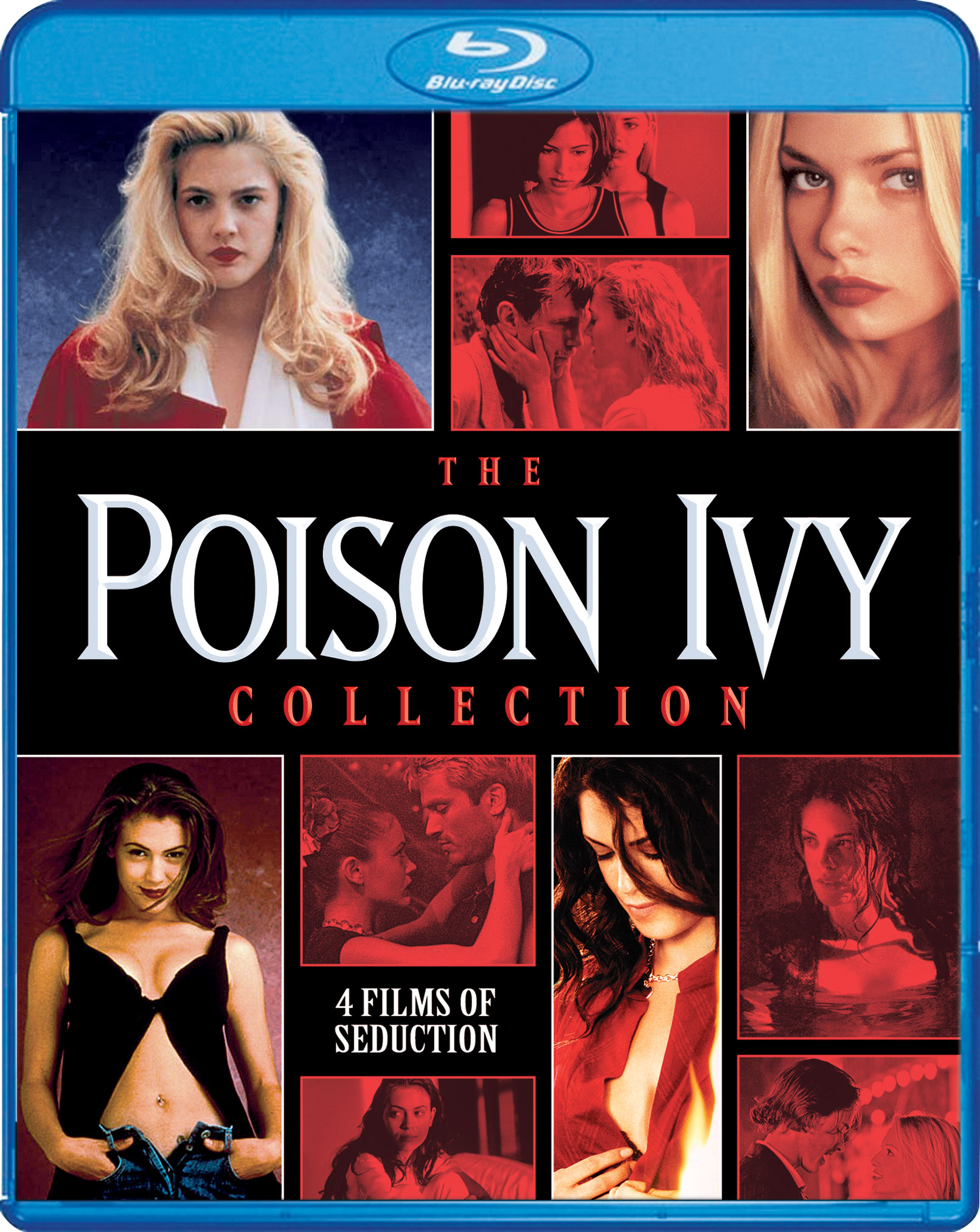 Scream Factory serves up the softcore eroticism, with a dash of Enigma.

The Poison Ivy Collection from Scream Factory is a hard sell as it lacks extra features and the films aren't the greatest. Nevertheless, if you want to own all four movies in HD, here is your chance.
Poison Ivy
75
Poison Ivy 2: Lily
71
Poison Ivy: The New Seduction
69
Poison IVy: The Secret Society
50
Blu-ray
78
Reader Rating1 Vote
20
69

The Poison Ivy film series has always been those flicks I told myself I should get around to watching but never did. The first one came out when I was still pretty young, so I never watched it. The second and third came out a bit later but didn’t seem interesting enough (although, the nudity did seem mighty tempting), and the fourth film came out so long after the others, it looked like it was just going to be a festering turd (boy was I right). This brings me to today, where I sat down with Scream Factory’s Poison Ivy Collection and proceeded to watch all four films back to back. Once the end of the fourth movie finished, I felt like I ventured into a hard-fought battle coming out the other side chaffed, disoriented and not entirely sure I won or lost.

First up was the original that started it all, Poison Ivy, starring Drew Barrymore as Ivy, who befriends a girl named Sylvie (Sara Gilbert), and proceeds to seduce Tom Skerritt’s moustache. At first, Ivy doesn’t seem so bad, as she appears to be a rather lonely girl with no friends. Sylvie is the same way, and the two hit it off rather nicely. Sylvie’s sick mother even ends up liking her, and Ivy ends up wanting to become her (it helps the two look similar). Tom Skerritt plays Sylvie’s father, and he is lonely and horny, as his wife doesn’t want to sleep with him, and he feels like he is getting older. It makes sense that Skerritt wants to bang Ivy, as she is a smoking hot 17?18? year old, and is ready to pounce. Unfortunately, Ivy’s mental state is unhinged, and she eventually wants to become the Mom of the family, which means the current sick Mom needs to go.

The first Poison Ivy is honestly the best of the bunch, as it has a story to tell. Sure, there is no nudity in sight, unless you count Tom Skerritt’s butt showing up. Most of the steamy action is under the shirt or oral simulation. Nevertheless, the eroticism is there, and Drew Barrymore plays a crazy girl quite well. The film properly invokes a rather sad conclusion to the story and works to make you feel sorry for Ivy. I just wish there was some nudity.

Next on the list was Poison Ivy 2: Lily, starring Alyssa Milano as the titular character. This time around, though, Lily isn’t a crazy woman, but a college student who needs to come out of her shell. Who better to learn from then Ivy, as Lily finds Ivy’s diaries and proceeds to learn the tricks and trades of seducing men. Now, I’m not entirely sure how Ivy’s diary and photos ended up at this college, as she was still in High School in the first movie, and come to the end of that movie it didn’t seem like she heading off to University anytime soon. Also, Ivy never had this big giant Poison Ivy tattoo along her back. It was a tiny one on her upper thigh. Jeeze, you would think the makers of the second movie didn’t bother watching the first film.

Alyssa Milano does an exceptional job at playing a shy, cute girl who thinks she’s ugly and not sexy at all (you know, the classic She’s All That type of girl.) However, when the time comes for Lily to break forth and become the seductive woman she wants to be, the change is sudden. It doesn’t make sense at all. One minute she is dating one guy (Johnathon Schaech), and posing for her art teacher (Xander Berkeley), and the next she is swearing like a sailor and smoking(!). At least this time around we gets some nudity (Milano boobies) and a few more sexy scenes. Also, it was rather interesting that Milano’s Lily isn’t a psycho chick, but just a shy girl who is trying out something exciting and picking the wrong guy to experiment with. Also, we can tell this movie is from the 90s as it features not just a dance club scene with Enigma sounding music, but a Halloween party with the same Enigma sounding music. Ooooooo aaaahhhh eeeeee eeeeeee e. Amen!!!

In the third outing of the Poison Ivy saga, we see Jamie Pressly playing Violet, the sister of Ivy. Yes, I know, in the first one Ivy was a loner and didn’t mention a family, and in fact, her real name wasn’t even Ivy. What, this doesn’t make sense. Ah screw it, Jamie Pressly nude!!

Anyway, Violet is angry her mother got caught screwing the pool boy and was kicked out of her job as the maid to a wealthy family. Years later, Violet shows back up to visit the same family and her childhood friend, Joy (Megan Edwards). Before you can say moist, Violet starts giving head to Joy’s fiancee, seducing Joy’s father, and just being an all-around psycho. As the sexy events unfold, Violet’s mental state starts cracking under all the sensual pressure and starts taking it out on the maid, the fiancee, the father, and Joy.

If there is one thing going for Poison Ivy 3, it’s that Jamie Pressly looks absolutely amazing naked. She also goes all in with the role and really drives home the crazy girl vibe. Other than that, this film lacks a story and is just pure sex, sex, sex.

Finally, and I say that with great pleasure, we come to the last film in the series Poison IVy: The Secret Society. This time around, the makers of the film decide to say screw you to the continuing storyline and do their own thing. We now get saddled with the sexy Daisy (Miriam McDonald) on her adventure to University in the big city, away from that crazy country life and country boyfriend (straw hat and all!). It doesn’t take long for her to attract the eyes of both a hot stud (Ryan Kennedy) and a creepy society full of hot chicks (and one really tanned girl) called The Ivies.

Full of intrigue, mystery, and raw sensuality…. I’m kidding. This movie is godawful. No one can act, the plot is a mundane Hallmarkesque story of the week nonsense, with the bonus of having some sexy boobs flashing the screen (unless you were the poor sucker that watched the TV version when it premiered). Honestly, I had a hard time focusing on this movie, as it was so damn dull. The only, and I mean only, redeeming quality in this shitfest was the nudity, but even that couldn’t save the film from winning the award for Dullest Film Featuring Great Boobies.

With the films out of the way, let’s talk a bit about Scream Factory’s work at bringing the entire series to Blu-ray. Out of the four films, the only one to receive a previous Blu-ray release was the fourth movie, and the results were tragic. A muddy, bland transfer that matched the shittiness of the film itself. This time around the transfer from Scream Factory has been brightened a bit, with better colour and appears to be a bit sharper looking. However, it still looks terrible.

The other three films in the series only had DVD releases prior, so there isn’t much to compare these releases against. Scream hasn’t mentioned where they obtained the transfers, and what work was done on them. The first film looks the best out of the three, with some pretty good color and even grain. The Standard Definition Inserts for the unrated footage don’t look that great, but that is to be expected. The same can be said for the other two films’ unrated SD footage as well.

The transfer for the second film is a bit shaky at times. One moment it will be quite sharp looking, and other times it comes across a bit dull. However, more often than not the film seems quite nice looking. The transfer for the third film looks very similar to the second flick. It can be nice at times and other times nothing great. I’ve certainly seen better transfers from Scream before.

Extra features on this collection are sadly extremely lacking. We get a new audio commentary with Co-writer/Director Katt Shea, moderated by C. Courtney Joyner, on the first film’s disc, with a couple of trailers. All the other films only include SD trailers for their respective titles. That’s it, that’s all.

The Poison Ivy Collection from Scream Factory is going to be a hard sell. The transfers aren’t anything spectacular, and there is hardly any extra features unless you count the unrated SD footage inserts as extras. The films themselves seem pretty tame compared to today’s standards. Sure, it’s fun seeing a couple of notable actresses getting frisky, but unless you are extremely hard up for some nudity, this boxed set is an iffy recommend.