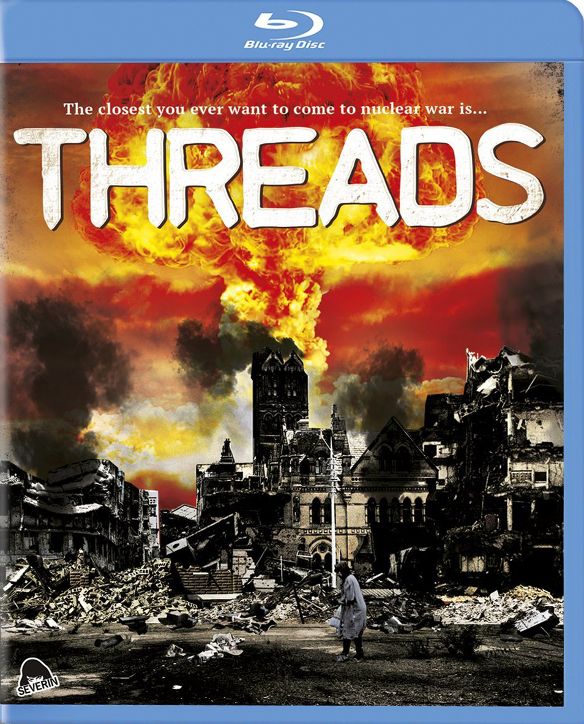 Threads Blu-ray Review (Severin Films)
Threads is a fantastic watch that everyone needs to see, and to do that, they need to pick up Severin's Blu-ray release; the 2k scan is great and perfectly suited for this type of movie, with a lot of extras to boot. Pick it up.
Film
Blu-ray
Reader Rating2 Votes
4.8

This docudrama tells the story of a nuclear attack and the events that follow primarily in the UK, following Ruth and those around her after they begin to experience the effects of radiation poisoning. The film progresses through the early years of nuclear fallout and then quickly moves to years into the future, after the population attempts to rebuild itself from near-medieval levels.

Imagine that nations are on the brink of violence. There’s talk and threats of nuclear armament, and potentially the haphazard release of an atomic bomb could be around the corner. The country is primed for the possibility, and the news is consistently grimmer by the day. Actually, you really don’t have to imagine it: we live it all the time.

But Threads, the 1984 television docudrama from writer Barry Hines and director Mick Jackson, took the idea of nuclear holocaust one step further for UK audiences: in a time when the threat of destruction was very real and often misunderstood by the general public, the visceral, depressing, and bluntly honest release of the film took viewers by surprise and scarred some of them for life. It was a “scare-them-straight” approach to filmmaking in the same fashion as brutal drunk driving documentaries shown to teens, and by god it works.

The film loosely follows Ruth (Karen Meagher), a woman living in Sheffield, England who, we learn early on, has gotten pregnant just before the onset of nuclear war. Terrible timing for sure, and Jackson continues to check in with Ruth as the harrowing predicament begins to boil. But more often, Threads takes a scientific approach to the nuclear bombing, beginning with the days leading up to the attack and then the days, weeks, months, and years after the fallout.

It’s difficult to say what’s better in the film: Jackson’s direction, or Hines’ writing. Either way, both come together to create a bleak film that’s often hard to watch. There are scenes that will cause the viewer anxiety as hysterical panic sets in within the town; other moments, like the radiation sickness most inevitably contract within the days following the attack, are painful reminders of the physical impacts of nuclear radiation for those who end up surviving the initial blast waves. From there, Threads continues to pile on terrifying statistics and gruesome, realistic special effects. Dogs, cats, the elderly, babies: none are safe from Jackson’s explicit footage.

It’s hard to imagine any viewer not getting sucked into Threads‘ plotting – even if they don’t find Ruth’s human element interesting, the sheer amount of destruction and human suffering should be enough to keep audiences hooked to the television. But more surprising is how appropriate Threads remains for today’s post-Cold War world; 34 years later, we haven’t advanced much from the looming threat of nuclear destruction. And that’s why this Blu-Ray release of Threads comes highly recommended: everyone needs to see this film to understand the devastation of the nuclear threat, as a reminder of how even the most different cultures are connected by the thread of being equally human.

Threads is a particularly graphic film focusing on the realistic effects of radiation poisoning. You’ll see vomiting, decay, dead animals, partially crushed humans, and all sorts of nuclear bomb-related illness. It’s disturbing and difficult at times, but certainly worth the impact.

None – not really the type of film you’d be looking for this sort of thing. Unless you like urination?

Severin Films’ release of Threads presents the film with a new, fully restored 2k scan. Some might see the end result and question the quality of the release; the source is obviously somewhat damaged, with some sway, scratches and debris, lines, and heavy grain textures. However, none of these elements seem like flaws in a film like Threads; it actually makes this feel even more authentic, and Severin have clearly run with the concept for their menu designs with 1:33:1 aspect ratio and an intentionally antiquated look. This is how Threads needs to be watched, and it would be strange if the movie had a pristine scan; the dirty, sometimes heavily grainy footage is necessary for the film’s impact, and this is a perfect representation.

The film gets a DTS-HD Master Audio 2.0 mono track and it sounds good; there are some muffled moments, but again, it all seems authentically documentary-esque. Other than that, no issues with this track, and fortunately Severin provide subtitles for those wondering about the characters’ use of “nowt.”

Severin have really stepped it up with the extras, managing to get interviews with Karen Meagher, director of photography Andrew Dunn, and production designer Christopher Robilliard. There are nearly 30 minutes of bonus interviews here between the three of them, all documenting some interesting elements about the making of the film (I particularly enjoyed the look at the destructive elements of the nuclear blast).

An audio commentary with Mick Jackson, featuiring writer Kier La Janisse and Severin’s David Gregory, is an excellent companion to the film, and fans will want to rewatch the movie with this on just to get even more information about the production.

One of my favorite elements on this disc, though, is Stephen Thrower’s thoughts on the film (about 30 minutes). He documents a lot of trivia, information, and positive criticism about Threads, and it’s always good to get his take on a film. This one’s definitely worth a watch.

This Blu-ray from Severin is absolutely worth the price, if not for the extras, then simply to watch the historically vital Threads in HD.