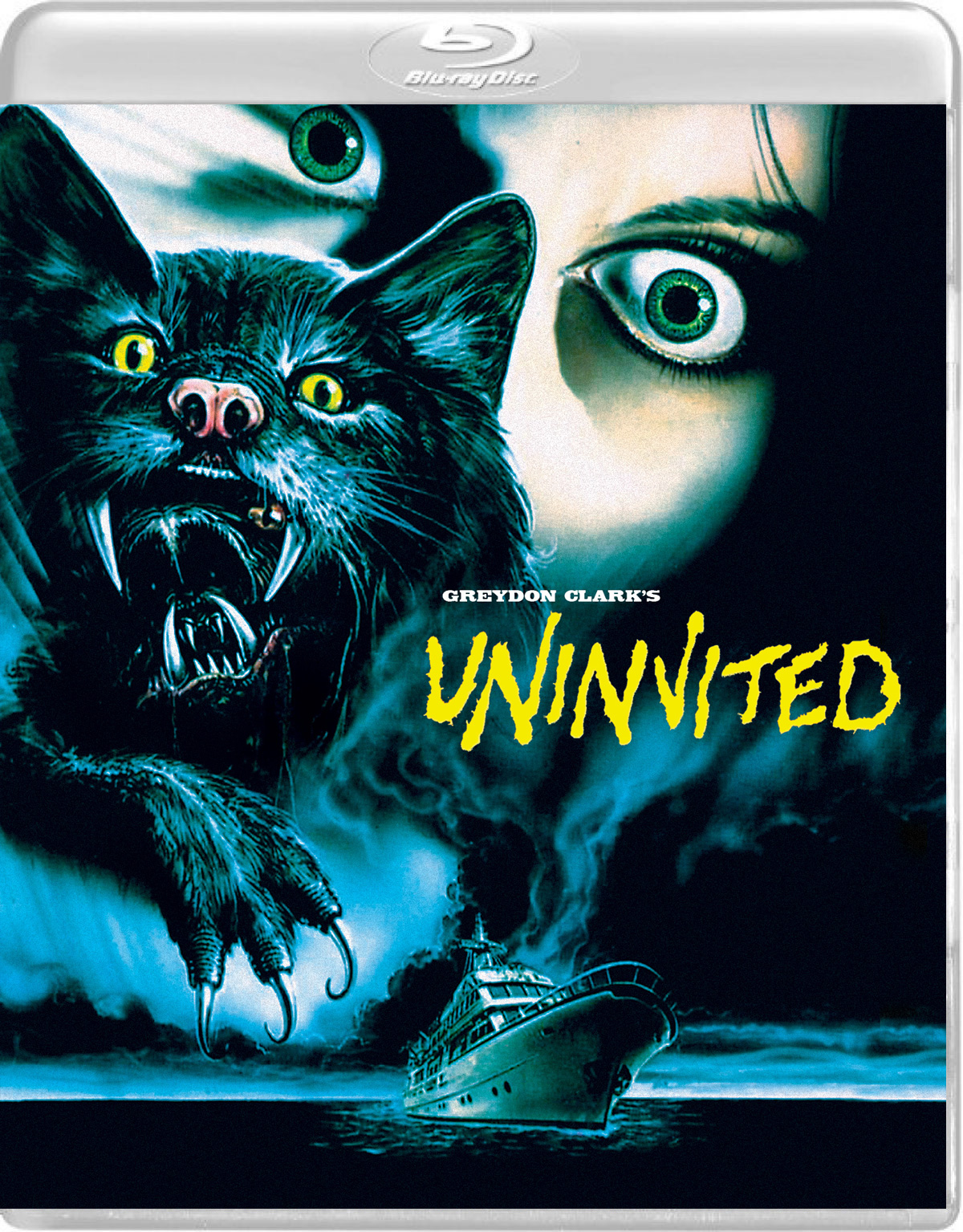 A scientific study of bad cinema

Uninvited is not a good movie, but it is a great bad one with some hilarious moments. Vinegar Syndrome has given the film an excellent new 4k scan, an international cut, and some solid extras.
Film
Blu-ray
Reader Rating0 Votes
4.1
Buy
Amazon

⚛ Abstract: A mutant cat escapes its testing facility and makes its way to Spring Break, where it’s nurtured and cared for by two party-going women (Toni Hudson, Clare Carey) who join up with some fratboy dudes (Eric Larson, Beau Dremann, and Rob Estes) for a party on rich criminal mogul Walter’s (Alex Cord) fancy yacht. Unfortunately, the cat houses a vicious beast that attacks the crew throughout their voyage to Grand Cayman. Cats, boats, and mobster enterprises combine in this strange experiment.

⚛ Analysis: Uninvited is not a good film. Clark knows this; there isn’t anything in this movie to suggest that the filmmakers, nor the actors (including a hammy Clu Gulager), were under any impression that this would be a masterpiece. Instead, Uninvited triples down on its oddness, setting up a zany and near-nonsensical premise about mobsters heading to their secret money stash in Grand Cayman while using a bunch of partying spring breakers as shipmates. The plot itself is so loose and reality-bending that it elevates the comedy in the film; the low budget, too, ensures that the audience will get a lot of laughs at the cheap effects. One of the best additions to the film is a looping cat sound effect, used literally every time the cat is on-screen; since Clark apparently did not have any other sound effects, he’s forced to randomly cut the sound effect to try to get the most range out of one sound. It’s frequently hilarious.

Other than that, Uninvited doesn’t offer much else; it’s a bit too long for its own good, with the middle act slowing the film down considerably. But dance sequences, an admittedly sexy Clare Carey prancing around in various form-fitting bathing suits, and over-the-top cat attack sequences help the viewer stay interested, and overall Uninvited is an intriguing bag of cheese that should certainly be invited to bad movie parties for a fun time.

⚛ Physical characteristics: Vinegar Syndrome has given Uninvited new life on Blu-ray with a new 4k scan of the 35mm camera negative. This results in a really solid picture, including vibrant colors, great depth, consistent skin tones, and a nice healthy grain field. Occasional scenes adopt a heavier grain especially in low lighting, but otherwise the film looks great in its current state and I imagine Vinegar Syndrome have done the best restoration that Uninvited will get.

For audio, the film gets a DTS-HD MA 1.0 mix that sounds about as good as Vinegar Syndrome could do with some of the problematic dubbing and recording from the source. Dialogue is well-represented although as mentioned, some of the recording itself has some echo and distortion. Otherwise, though, the score and dance numbers come through quite well. English subtitles are also included.

Extra features include the international cut of the film, which runs a bit longer at 93 minutes with a couple of minor changes within the film itself including additional footage, a few different music cues, and a very quick change to the ending. This has also been restored, and looks consistent with the main film. Greydon Clark provides a commentary on the film, discussing various areas of the production. A short 9 minute interview with Nicholas von Sternberg, cinematographer, who discusses shooting the film, the difficulty of getting good shots on a cramped boat, working with various cats, and his disappointment with the end product. Finally, an SD trailer is also included.

The packaging comes with alternative cover artwork and accompanying DVD.

⚛ Conclusions: Vinegar Syndrome has done a great job with Uninvited, and the inclusion of the lost international cut and a few other extras make this a must-have for fans of bad cinema. At the same time, those who don’t appreciate films of this nature – certainly not good by any definition – may want to skip this offering from Vinegar Syndrome.

Check out our gallery for more screenshots from this Blu-ray!