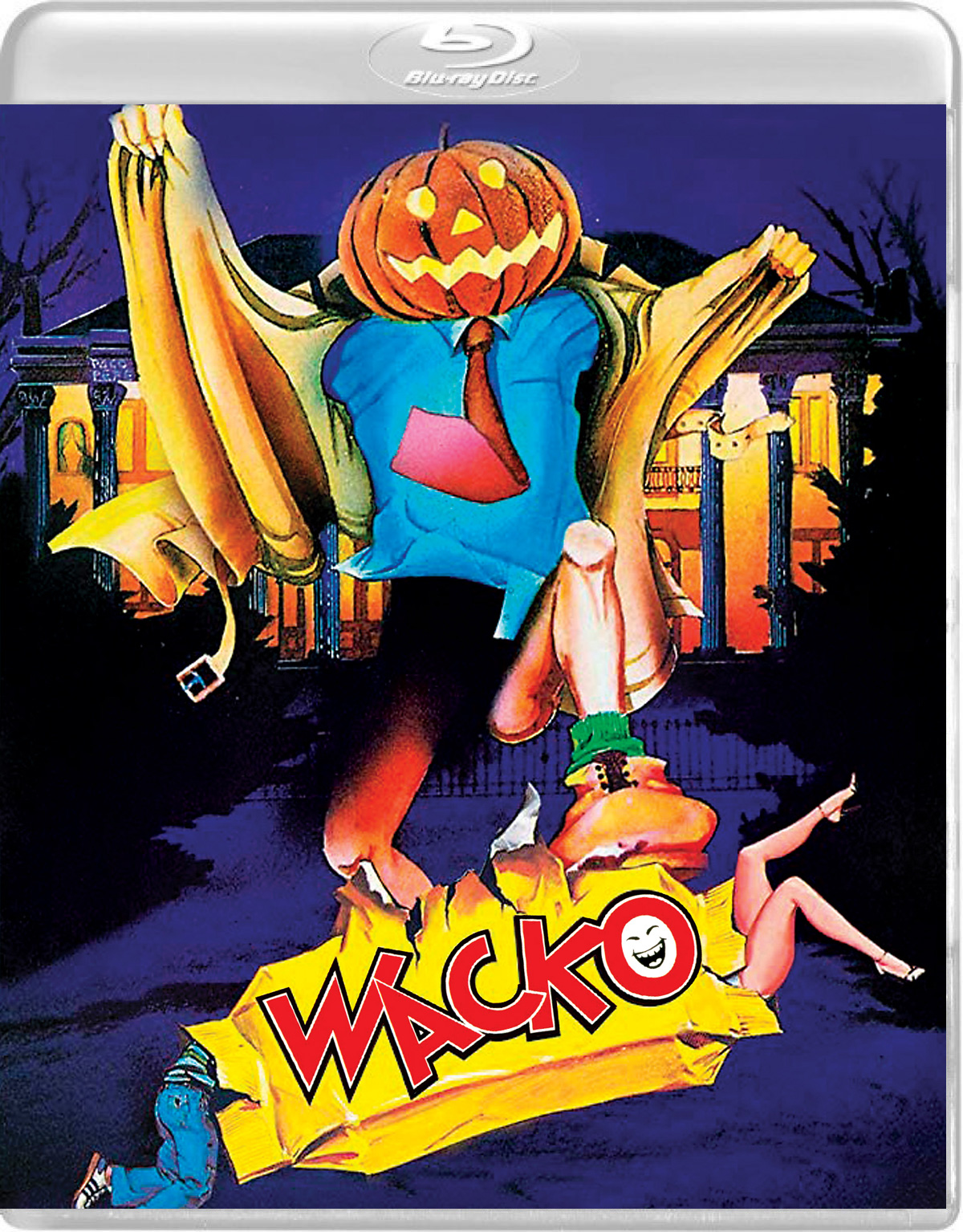 Greydon Clark has had a number of film releases in his career – some good, some bad, one with a killer mutated cat trapped on a boat – but arguably his most successful release is the 1982 slasher parody Wacko. Most likely influenced in part by the very similar Student Bodies and Thursday the 12th released just one year earlier, the Halloween-set slasher comedy tells the story of the Lawnmower Killer, a crazed murderer who has made an appearance 13 years after his initial spree. Riffing on Halloween, Friday the 13th, Psycho, and more, Clark crafts a compelling and very funny movie that capitalizes on the decade’s growing trend; and with a great cast of bigger names (George Kennedy, Joe Don Baker) and at-the-time amateurs like Andrew Dice Clay and EG Daily,  Wacko has just the right formula for a lot of fun.

Like Student Bodies before it, Wacko‘s writing consists of loads of puns, surrealist humor, and various slapstick-esque elements; all of these, though, are couched in genre elements. There’s a character named Norman who carries around his dead mother Norma, and he also makes a lawnmower sound when he gets riled up. Dice Clay’s Tony Schlongini’s claim to fame is – well, I think his name says it all, an occurrence that makes its way to screen during a table-flipping scene at dinner. But the film also has some interesting commentary on the ever-popular police detective as well; Joe Don Baker’s detective Dick Harbinger is a disheveled, ever-hungry guy who constantly dumps garbage from his car and has an obsession with the Lawnmower Killer’s return.

All of these elements make for a raucous time with jokes coming in all directions. Some of them land, some of them don’t, but the creativity from writers Dana Olsen, Michael Spound, Jim Kouf, and David Greenwalt makes it enjoyable all the same. The horror tropes are fairly routine, but they work in much the same ways as they do for Student Bodies: mostly mocking, but with a reverence to the source material that shows Clark’s appreciation for the genre.

Fans of irreverent comedies and horror films will certainly get a kick out of Wacko. It may or may not be the best example of this type of film, and the full impact of the film will depend on the viewer’s personal humor. But Wacko has a number of great jokes, it has a Halloween-themed setting, and it is ultimately an important reference point in horror parody.

Vinegar Syndrome has released Wacko on Blu-ray and includes a DVD along with it. The film gets a new 4k scan of the 35mm camera negative, and it’s the first time this has been available on Blu-ray; the result is an excellent transfer that has vibrant colors, great depth, and medium-to-high grain depending on the scene. This restoration really pops and despite a couple of soft-focus shots and some mild damage, this may be the best presentation of Wacko we’ll see.

Audio is presented with a DTS-HD Master Audio Mono track and sounds about as good as expected – which is to say, not super dynamic. The film has a couple of scenes that feature poorly-recorded audio, and that comes through with muffled dialogue. Other than that, though, no problems, and Avalon’s “Messin’ With My Baby” is pumpin’!

Extra features are limited but Vinegar Syndrome does include a new commentary track with Greydon Clark just like they did on Uninvited, and Clark does provide some good running commentary throughout the film about behind-the-scenes info and extras that pop up. Also included is a new interview with Nicholas von Sternberg (about 7 minutes) where he goes into some info about the shoot, working with Clark, and some of the lighting they envisioned for the shots. A nice addition is a slew of deleted scenes that are actually preserved quite well, despite a lack of audio; many of these seem like they were nearly ready for insertion in the film before edits were made, including a riff on Little Shop of Horrors and an undressing sequence with EG Daily and Michele Tobin you won’t want to miss. An HD trailer is also included, as well as reversible cover art.

Wacko is a great film, and Vinegar Syndrome have nailed this Blu-ray with an excellent transfer and a number of extras that make this a solid purchase. Definitely recommended.

Check out our gallery of screenshots from this release here.