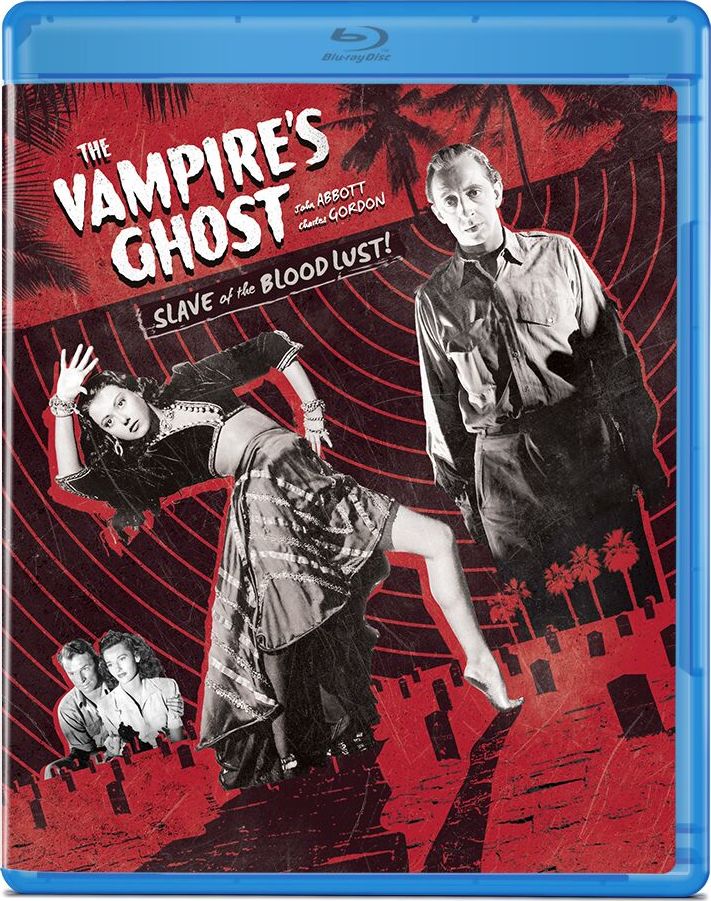 In the African jungles, a vampire has been draining the blood of his victims. The natives believe it to be some sort of voodoo, but they’re not sure of the culprit – the only thing they can do is bang their drums as a warning that something sinister lurks around them. However, Roy Hendrick suspects that his friend and savior Fallon, local business owner of a gambling bar, is afflicted with the vampire’s curse after he lays him to rest at the top of a mountain only to have him reappear. Once Roy is cursed, Fallon intends to make off with his fiancee Julie – but Roy’s not going to go down without a fight.

Lesley Selander’s 1945 horror film The Vampire’s Ghost features a strange title – vampires, being undead, probably don’t have a ghost in the supernatural sense. But the movie makes its reference clear in its middle act when the film’s vampiric character Fallon (John Abbott) “dies”: his friend Roy (Charles Gordon) is sent to lay him to rest atop a mountain with a box of earth underneath his head, and eventually Roy finds Fallon returned from the grave when he gets back from a safari in the African jungles.

In some ways, The Vampire’s Ghost is disarmingly clever. Its opening act utilizes a lot of the vampire mythos that had become popular at the time, including the vampire’s lack of reflection in mirrors, its aversion to sunlight, and an obvious allergy to all things Christian. As Selander introduces his audience to Fallon, it becomes quite apparent to anyone well-versed in vampire folklore that this is the titular antagonist and the threat whom Roy will be fighting. But the film isn’t so much concerned with keeping the vampire’s identity a secret as much as it wants to explore the rather lackluster element of maintaining immortality and, eventually, getting bored with life.

While The Vampire’s Ghost is only an hour in length, it’s still a slowly-paced film. Part of that is intentional, because Selander spends quite a bit of time early on making sure that Fallon becomes an empathetic character despite his bloodlust; he even becomes a friend and savior to Roy before Roy finds out about his vampiric curse. Selander works in African voodoo as well, which, while somewhat exaggerated for the storyline, is carefully crafted and respectful rather than salacious.

Where the film falters is in its final acts when the vampire elements get cast aside. Selander transitions to a love story as Fallon steals Julie away into the jungle, attempting to live his life in peace with a lover he has basically brainwashed. The film loses some of its dynamism when the vampire angle drops away; though Abbott is a pretty convincing vampire in that he can be both suave and threatening, he doesn’t get a chance to shine in the film’s conclusion, which – like many classic horror films – becomes a race to get things over as fast as possible.

While this doesn’t have the horror of Dracula films nor the appeal, The Vampire’s Ghost is an interesting mix of vampire lore and African culture that should appeal to classic horror fans looking for something a bit different from the usual.

Being in black and white and from 1945, The Vampire’s Ghost has very little violence. There’s a bullet wound that’s just wrapped in gauze, a stabbing with no actual blood, and a spearing – but that’s it.

Besides a sexy belly-dancing scene, none.

Olive Films has released both a Blu-Ray and DVD version of The Vampire’s Ghost; I imagine they are fairly similar in terms of quality. It doesn’t look like much has been done to the video on this release, although I will say that the film has aged surprisingly well in terms of damage. There are a few cigarette burns occasionally but other than that there are very few flaws with the source itself. While the picture could have used a bit more restoration, Olive Films doesn’t do elaborate transfers except for their Olive Signature series so this is in line with their previous releases.

Audio is presented in DTS-HD Master Audio 2.0 and sounds quite good with a clear, crisp track and no drops or scratchy effects. English subtitles are also included.