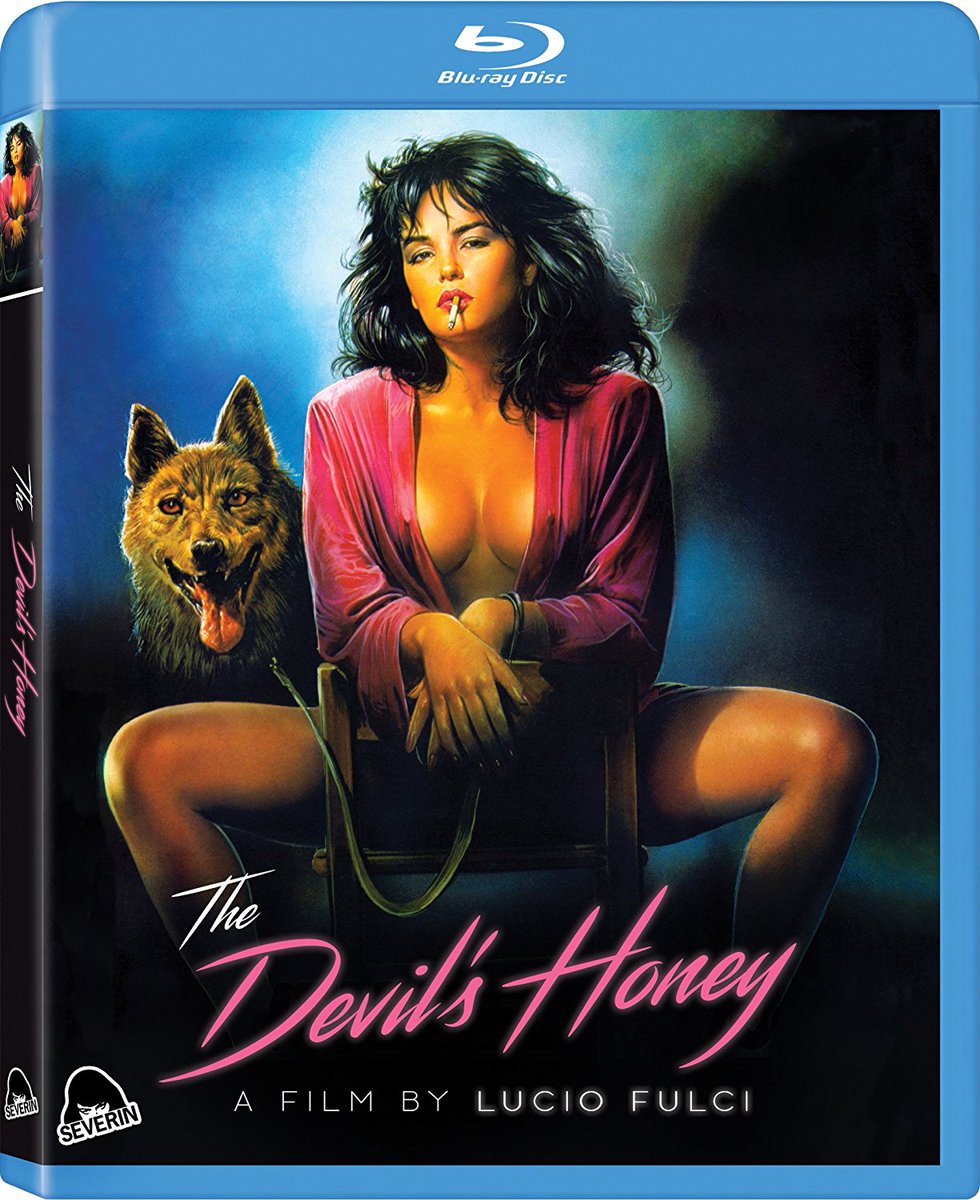 A sexually abused woman named Jessica loses her lover in a motorcycle accident that gives him a brain embolism, and she holds the surgical doctor responsible. Dr. Simpson is also going through his own issues after his wife decides to leave him when she realizes that he’s no longer sexually attracted to her. Jessica overcomes her cowed demeanor to become the tormentor, kidnapping Dr. Simpson and chaining him up. What will she do with the doctor, and will she be able to overcome her previous humiliation? Similarly, will Dr. Simpson escape, or will he become a willing participant in domination?

Fulci follows two different characters in the first half of the film. Jessica (Blanca Marsillach) is dating the saxophonist Johnny (Stefano Madia), a guy who can be great when he wants to be but also sexually manipulative whenever he and Jessica are alone. Though he’s abusive, Jessica can’t shake the guy because she’s so enraptured with him, though Fulci never really gives a reason why that might be. On the other side of things is Dr. Wendell Simpson (Brett Halsey), a busy surgeon who has been going to prostitutes to get his kinks rather than dealing with his wife’s (Corinne Clery) needy feelings.

For quite a long time, these two stories exist in parallel to the other, with no real connections. Fulci operates as though these two ideas are two different stories until nearly 45 minutes later Jessica and Dr. Simpson meet – Johnny dies after hitting his head on a rock, and Dr. Simpson is unable to operate because he’s distraught about his wife leaving him. The crux of the plot finally opens up as Jessica begins to make sinister phone calls to the Simpson residence and then, finally, abducting Dr. Simpson at gunpoint.

While The Devil’s Honey waits a bit too long to get to the meat of the plot, Fulci’s characterization does work rather well. The film finds time to work in a number of sex scenes, obviously – and for the most part, these moments will be the most memorable thanks to the fetishism – but more often Fulci narrows his scope to showing two disparate relationships. One finds Jessica in a submissive role due to Johnny’s abusive side, and one finds Dr. Simpson in a more dominating element ultimately leading to his sexual boredom. The second half of the film flips this narrative so that Jessica, learning from Johnny after his death, becomes a dominatrix figure and harshly subjugates Dr. Simpson by placing all of the blame on him.

Fulci has some interesting ideas, although the ways The Devil’s Honey explores them isn’t always effective. The film oscillates between being overly dramatic and devilishly tongue-in-cheek; at times Fulci’s exploitative cinematography seems to clash with the potential seriousness of the plot in which two people discover the kinks and fetishes they never knew they had. Flashback sequences are curiously peppered throughout as Jessica tortures Dr. Simpson, leading to weird narrative jumps.

The conclusion, too, lacks a definitive meaning. It’s unclear what exactly Fulci means by his story – while Jessica does overcome her timidity, it’s hard to see the situation as anything but problematic. In some ways The Devil’s Honey simply identifies the reciprocal nature of sexual abuse; in others it seems as though it’s meant to be empowering, as a sort of sexual awakening. I’m not sure that either conclusion really stands out, leaving the film with an incomplete narrative arc. Still, The Devil’s Honey is full of sexy scenes, a great saxophone theme, and a couple of powerful domination moments, and Fulci’s film is worth a look because of its uniqueness compared to the rest of his oeuvre.

There’s actually not too much violence in the film despite Fulci at the helm. There’s some sexual violence including what nearly amounts to rape, as well as some torture moments when Jessica has Dr. Simpson hostage. However, they’re not very graphic, far less explicit than something like The New York Ripper.

Here’s where The Devil’s Honey shines. Blanca Marsillach is nude almost the entire movie in some form or another, from sex scenes to more tame ones where her breast pops out of a leather jacket while running. Corinne Clery also gets fully nude in her short scenes, and a random prostitute is also fully nude while pleasuring herself with a nail polish applicator. Even Brett Halsey has his naked scenes despite a lack of full frontal.

Severin Films has brought The Devil’s Honey back from the grave with its first HD transfer ever. This is a lesser-known Fulci film and its preservation has obviously not been a priority, because the scan is fraught with all kinds of damage – burns, marks, blue lines, etc are all visible during the film. Some scenes look quite good thanks to Severin’s HD scan; others have serious grain blurring. In all honesty this is most likely not Severin’s fault and The Devil’s Honey looks about as good as it can despite its age and damage. No one will be blown away by the transfer, but it is probably the best that can be done with the film.

The Devil’s Honey features both an English and Italian linear PCM track, both of them featuring some problematic dubbing (during post-production and not due to Severin’s error). The English track sounds good but does have some volume issues occasionally, because the Italian track sounds a bit cleaner with less muffling than the English soundtrack. Still, I preferred the English dub over the Italian – though with this offering either will suffice. There are also English subtitles available.

Severin has given this disc quite a few special features. There are new interviews with Corinne Clery, producer Vincenzo Salviani, composer Claudio Natili, and actor Brett Halsey that add about 45 minutes of extra features. Also of note is an interview with critic Stephen Thrower on the merits of The Devil’s Honey and its context in Fulci’s career (about 25 minutes). Finally, there’s an audio essay from Troy Howarth about the film interspersed with stills.

Also included is the alternate title sequence with Dangerous Obsession and a trailer, plus double-sided cover artwork.

This is quite a nice deal for those interested in the film or anyone who wants to check out this rather hidden work from Lucio Fulci. Now’s the time to pick it up, with a solid transfer from Severin and a number of extras to add to the experience.