It would be understandable for contemporary viewers to see the primitive alien designs in Kôji Shima’s Warning from Space and immediately write off this 1956 science fiction classic. But that would ultimately be a disservice to the viewer, because this Japanese film about star-shaped aliens assuming celebrity form to warn Earth about an impending planetary collision is a surprisingly strong potboiler that eschews the normal alien threat for a more peaceful, but still suspenseful, approach.

The film initially centers around a group of Japanese scientists who observe the alien invasion; called the Pairans, they eventually shapeshift into a singer/actress to warn them of a planet that is making its way directly towards Earth. The only way to stop it is for the world to band together to use their nuclear weapons to destroy the planet before it reaches Earth in 90 days. Unfortunately, most of the world fails to see the threat because the planet isn’t visible to the naked eye, and even then nuclear weapons don’t work to stop its descent. The only true way to save the world is Dr. Matsuda’s (Isao Yamagata) formula for a new elemental device.

Interestingly, Warning from Space‘s aliens are not the film’s primary plot element, but more a method of getting to the apocalyptic problem. Shima uses his aliens for humor – they comment on humanity’s disgust about the alien “ugliness” and hit right back at our funky-looking noses – and also as a means of noting our one main consistency as a population: fighting each other.

In historical context, Warning from Space seems to be a direct comment on worldwide usage of nuclear weapons in the wake of the ten year anniversary of Hiroshima and Nagasaki. The film’s message focuses on using the world’s weapons for peace instead of war, literally asking the rest of the world to launch all of their nuclear missiles into the planet rather than at each other. Even with doom on the horizon, the world refuses until the last minute. Not only that, but it asks its characters to develop nuclear weapons to be used for good instead of evil which is almost co-opted at the last minute.

Shima sees the value in scientific experiment in pursuit of common good, and that’s ultimately what Warning from Space addresses in its final chaotic minutes. It’s something of a rushed ending, with the film refraining from addressing the fallout of the planet’s explosion and the residual radiation that will ultimately impact the earth. But it still ends on an upbeat note – the world is saved, Earth has learned to work in tandem with its alien visitors, and possibly war has been averted due to a worldwide disarmament.

Japan’s first color science fiction film manages to conjure some pretty important themes from what initially seems like a cheesy setup. Get past the alien costume designs and a thrilling film with historical context awaits.

CHECK OUT
Full, uncompressed screenshots from this Blu-ray.

Arrow Video has released Warning from Space on Blu-ray with its original 1.37:1 aspect ratio from an HD master. The video quality is fairly good but does have a pretty prominent grain field that can occasionally appear to shimmer on the screen. The element is in okay shape, but there are quite a few moments of damage and various color warping moments; two scenes in particular suffer from a reddish-hued fluctuation. While the HD transfer perhaps does not meet the normal lofty expectations of an Arrow presentation, it is most likely the best that could be done with the supplied master.

Audio is presented in original Japanese LPCM mono, and it sounds fairly good with a solid dialogue mix. A subtle static crackle can often be heard in quieter moments but it does not become distracting. English subtitles are also included as a default.

For extras, Arrow has included a new partial audio commentary from Stuart Gilbraith IV, which runs the first 65 minutes of the film at which point the film ends and goes back to the main menu. Also new to this release is an HD version of the American release, which has a few differences from the main film including rearranged scenes, English newspaper inserts, and some changes to dialogue. The transfer is mostly the same as the Japanese version though it has been assembled from a few different sources, and so some color grading is slightly different. An essay booklet included in the limited edition release features a rundown of the changes between Japanese and American versions as well as a look at the artwork of alien designer Taro Okamoto.

Also included on this release are theatrical and teaser trailer and image galleries. The package also comes with reversible cover artwork.

Warning from Space is a great classic science fiction film and Arrow Video has given it a quality release. Despite some issues with the source material, the video quality is mostly good and some new extras add even more value to this release. 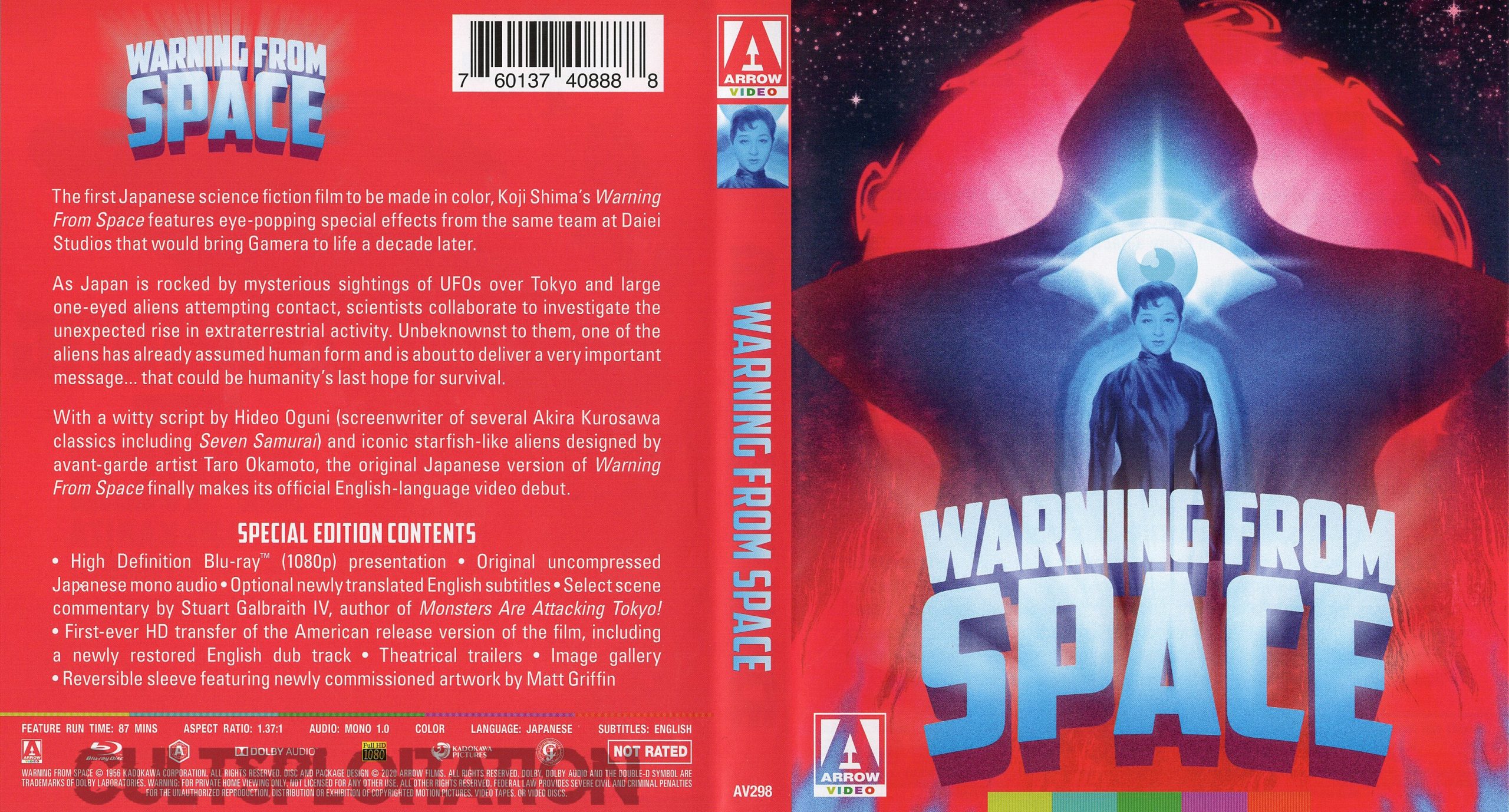 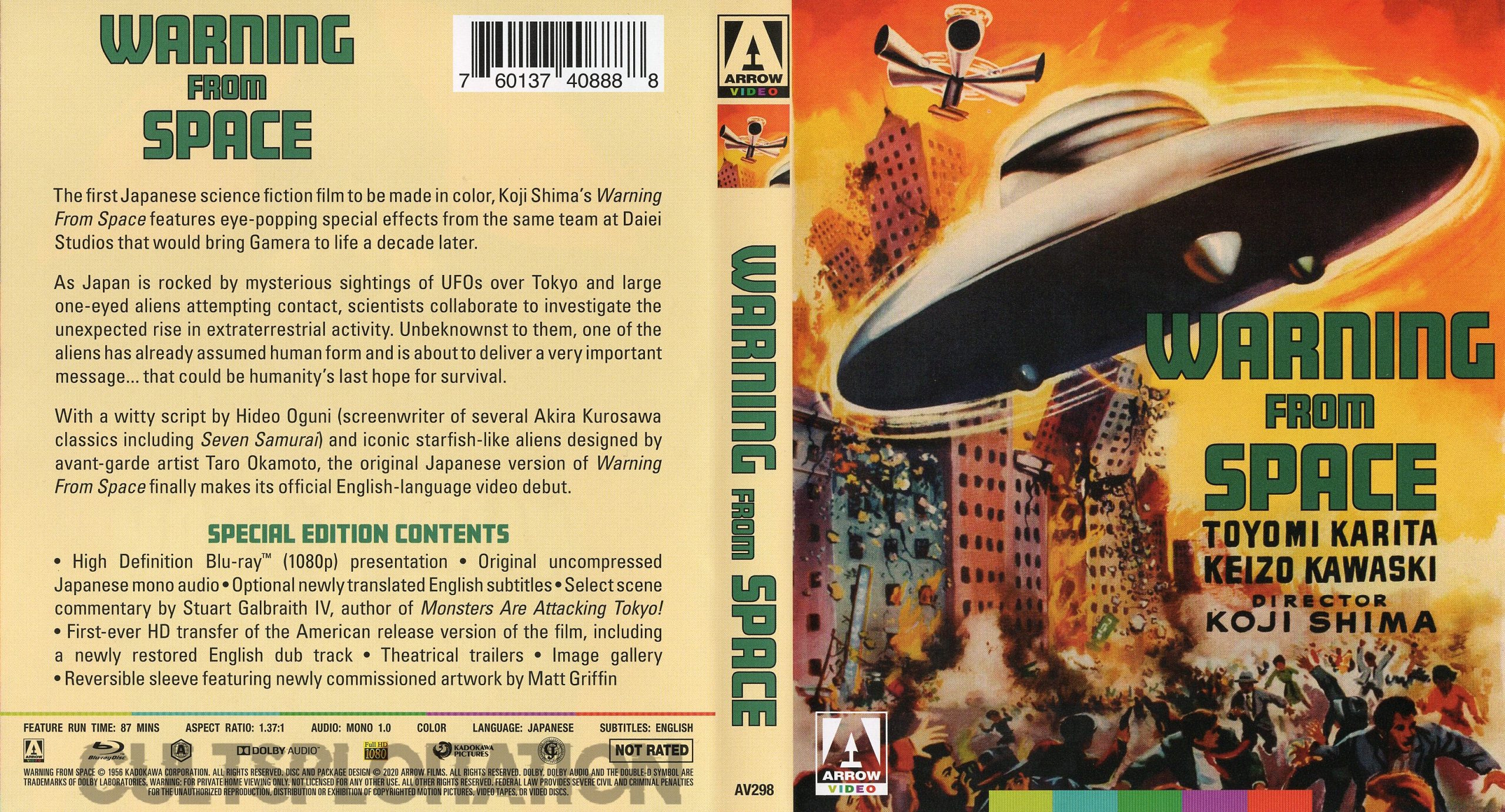 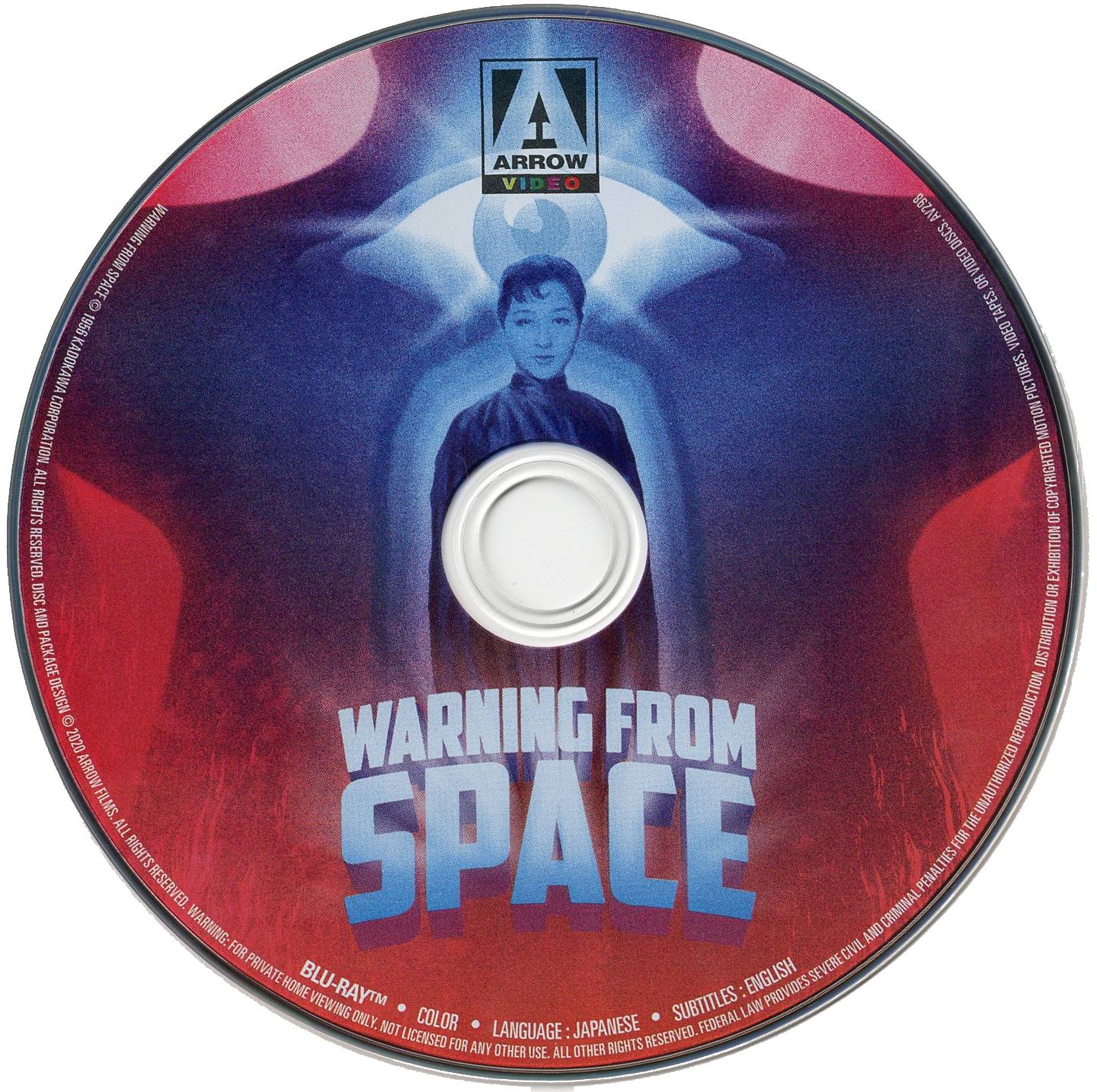 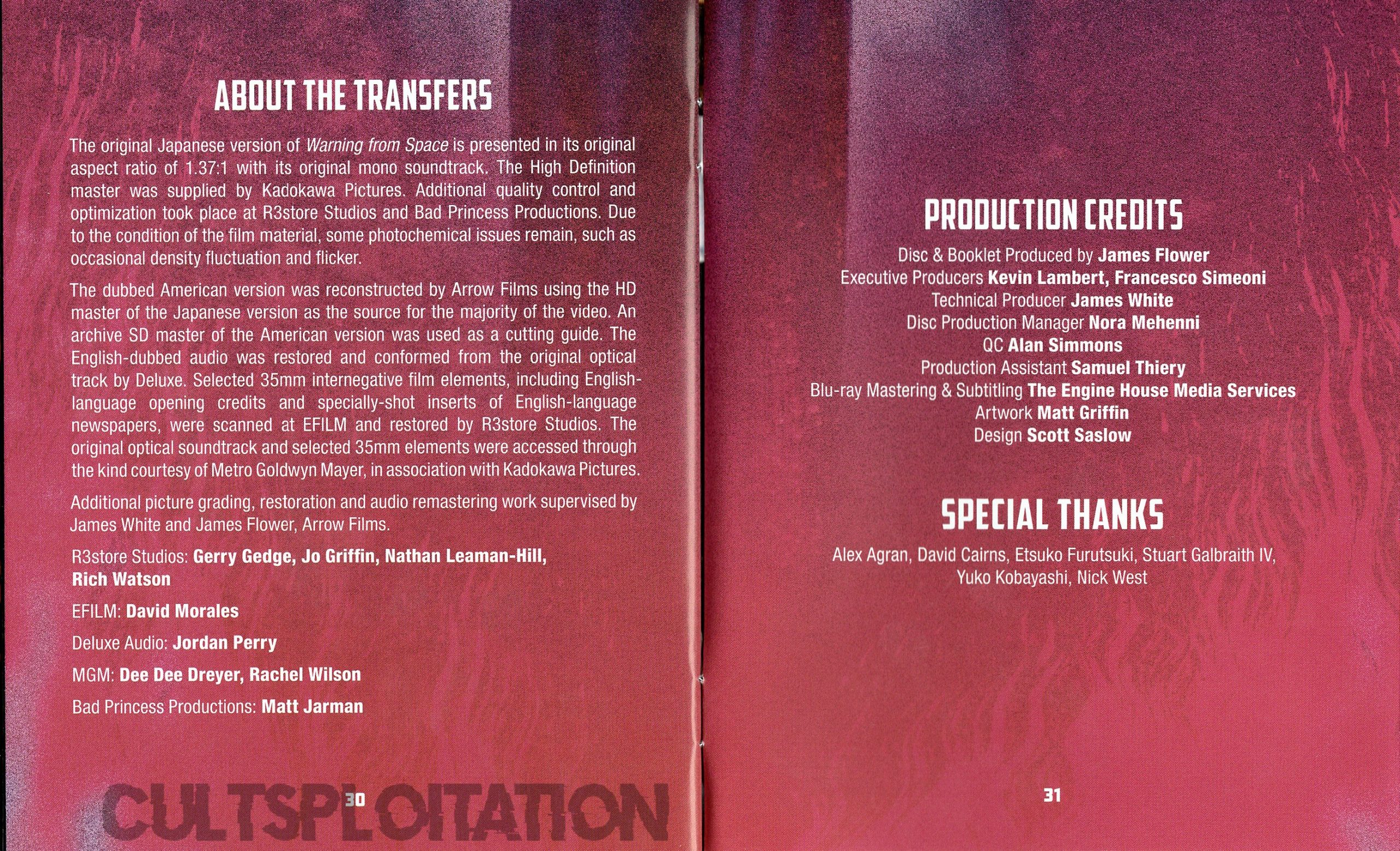