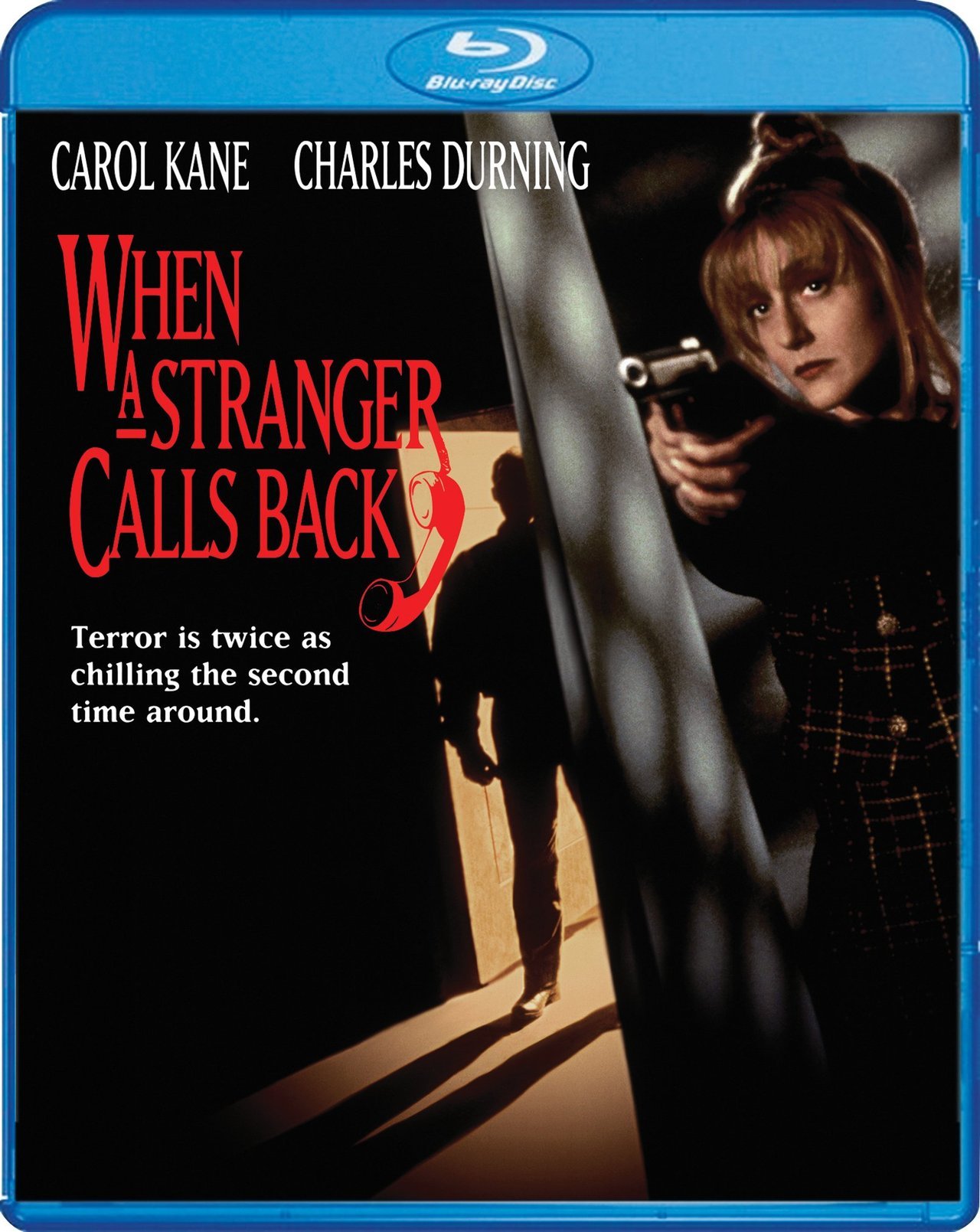 When a Stranger Calls Back Blu-ray Review (Scream Factory)

In 1993, Fred Walton pulled together Carol Kane and Charles Durning from When a Stranger Calls and created a sequel to the film 14 years later – for Showtime, no less. The behind-the-scenes production that led to When a Stranger Calls Back must make for an interesting story, but Walton and company seem to have bridged the long gap between the two films without much issue: this made-for-TV sequel (though no need for edits because it was aired on Showtime) picks up comfortably from its first iteration, following a new babysitter Julia (Jill Schoelen) five years after she experiences a terrifying event with an intruder. Kane’s character Jill appears, now working in a women’s shelter as a therapist for people who have experienced upsetting trauma, and she makes it her vendetta to find the guy who is stalking Julia yet again. Durning’s detective John Clifford also comes in for this new installment, acting as a police liaison who is apparently free to just roam around crime scenes at will.

While When a Stranger Calls Back immediately sets up familiar territory with Julia’s first encounter with a stalker, Walton changes things up quite a bit throughout. For one, the film uses the verb “calls” loosely – there’s not a whole lot of phone play, instead focusing more on the stranger literally appearing in various areas due to his penchant for camouflage. But the initial stalking sequence is quite suspenseful as Julia, home alone with kids, is plagued by a man on the other side the front door requesting her to call the Auto Club and then his wife. Later on, as the stalking gets worse, Walton focuses on Julia as his main protagonist, and it’s interesting to see her character change from When a Stranger Calls – she’s toughened up, learned martial arts, and carries a gun. She also deeply understands the thought processes of the stalked – knowing exactly what’s out of place in the house, or recognizing threats in otherwise mundane things.

The one area that Walton misses is a proper look at the stalker (Gene Lythgow); he does give the audience a really quick look into his miserable life and his weird philosophy about mirrors in an extremely awkward ventriloquist live performance, but ultimately these don’t give much motive or insight to his character. Also, though When a Stranger Calls Back does explore how the stalker is able to conceal himself in various houses, it doesn’t really explain how he’s able to make his voice sound like he’s in different locations. That’s a mystery that is left up to the viewer’s own suspension of disbelief.

Perhaps surprisingly for a TV movie, When a Stranger Calls Back is a pretty good thriller, with enough changes made to the themes and flow of the film to get out of the sequel rut of following in the original’s footsteps. The finale is definitely a wacky surprise if you’ve never seen the movie before, and even if some of its crazier elements defy reason, it’s grounded enough to remain creepy (that black facepaint! being in a hospital room with the stalker in the shadows! Jill Schoelen’s terrible mullet!). Definitely worth a revisit for fans of the original.

Scream Factory has given When a Stranger Calls Back a new Blu-ray release with a 2k scan from original film elements, presented in either 1.78:1 or 1.33:1 aspect ratio. The first menu to greet you allows you to pick which version you’d like to watch, strangely with 1.78:1 listed first. However, the film premiered in 1.33:1 since it aired on Showtime and I don’t believe it was ever really presented as 1.78:1. Both have the same video quality, which is quite good – lots of depth, good medium grain presence, and some vivid colors and proper black balance. However, the 1.33:1 ratio is the only one I can really recommend, since the 1.78:1 is basically just zoomed version to get rid of the matte bars and it cuts off some important details from the bottom portion of the screen. Unless you really can’t stand the box, the 1.33:1 is the best visual representation of the film.

The audio gets a little dicier. This features a DTS-HD MA 2.0 track and there are definitely some issues with whatever source has been used. Chiefly, one can hear some major static ruffling in quiet scenes, almost to the point where one might think it’s raining within the film or someone’s taking a shower in another room. It’s pretty distracting, but those issues do only crop up when it’s quiet (for this film, a number of times). Dialogue is occasionally tinny or muffled as well. Overall, the audio is not the best on this release. English subtitles are included as well.

Extras include three new interviews: a 13 minute discussion with Fred Walton, who details some of the inspiration for the camouflage; an 11 minute interview with Carol Kane, who talks about many of her friends working on the picture with her and the successes of both films; and a 13 minute interview with Jill Schoelen, who gives an emotional discussion about her work with Walton, loving When a Stranger Calls, and feeling very intuitively connected with her character and trauma (these interviews courtesy of Severin).

Also included is Walton’s 20 minute precursor to When a Stranger Calls called The Sitter, which is in rougher shape but certainly resembles his opus significantly. A TV spot is also included. Blu-ray interior features a still from the film.

When a Stranger Calls Back is a nice surprise as a sequel 14 years in the making, and Scream Factory have done a good job with the new transfer on this release. However, the audio track definitely has its issues and the 1.78:1 inclusion feels a little unnecessary. Extras do make this worth getting if you don’t own the earlier Second Sight double-feature Blu-ray.