Zombie 3 Blu-ray Review (Severin Films)
Zombie 3 is a cheesy, often flawed film due to its production and lack of direction, but it's still a fun and violent ride. Severin Films has done a great job on this Blu-ray release; the transfer is good, but the extras definitely make it worth a buy.
Film
Blu-ray
Reader Rating0 Votes
4

Government operatives have been working on a chemical agent known as Death One for virulent warfare, but after that virus is stolen by an operative, the military accidentally releases a cloud of contagious ashes into the atmosphere, infecting most of the natives in the Philippines. A group of soldiers and tourist girls hole up and try to survive the zombie onslaught, but they’re not just battling the undead: they’re also trying to make it out of the quarantine zone without getting shot by government operatives. 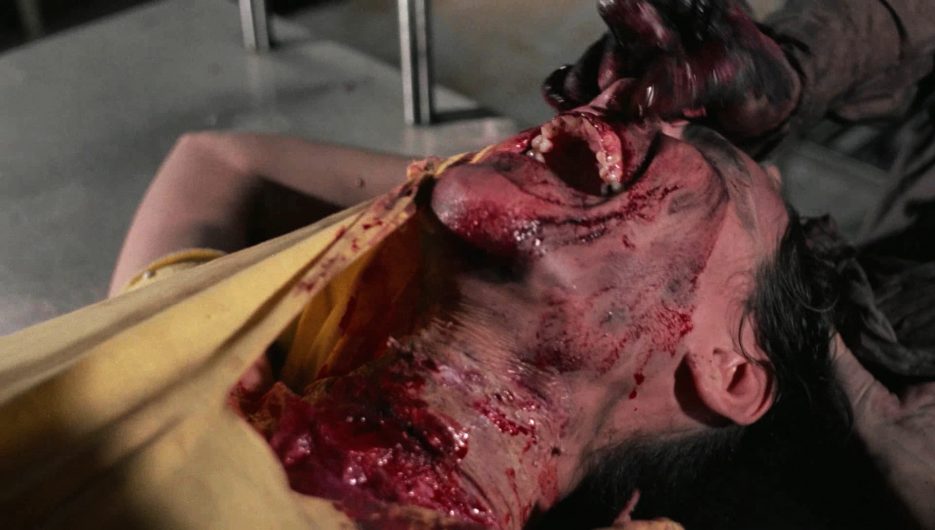 Italian horror movies often have the misfortune of difficult sequel titles; for example, Fulci’s first Zombie film from 1979 was actually widely known as Zombi 2 due to Dawn of the Dead‘s Italian title Zombi. That makes Fulci’s sequel in 1988 technically Zombie 3 despite being Fulci’s second in the series. That’s not the only issue that arose working on Zombie 3, mind you; the production was fraught with problems, from budgetary restrictions to Fulci’s poor health to the Philippines locations that were potentially dangerous war zones. Frankly, it’s amazing that Zombie 3 is a complete and full film that’s even worthy of viewing at all, and a lot of that praise goes to Claudio Fragasso and Bruno Mattei who helped finish the footage. So take the following review with a grain of salt – it’s amazing that Zombie 3 is a movie at all despite massive issues in the plot.

Using the term plot, written by Fragasso and Rossella Drudi with a lot of input from Fulci, is a somewhat loose approximation of what Zombie 3 actually offers. The film is nearly lucid at times, with huge gaps in the storyline where it almost feels like reels of film are missing. That’s because they are, but the presented film is a mess of scenes that basically boil down to elaborate and often extremely violent zombie attacks. There’s very little characterization or development; all of the cast are as bare bones as it gets, from the soldiers (Vanni, Sarafian, Dell’Acqua) looking to get laid to the girls who are down to lay them (Marina Loi, Deborah Bergamini, Ulli Reinthaler). Fulci’s interest in these characters only stems as far as getting them into situations that can get them killed, and while this often helps Zombie 3 move swiftly from scene to scene, it also means that there’s precious little that’s memorable about the story itself.

That’s disappointing, because Drudi and Fragasso seem to have a very environmentally-friendly theme running throughout that gets lost in the zombie attacks. The prologue and epilogue of the film are filled with on-the-nose dialogue about environmental disasters and respecting the environment; there’s even a radio DJ named Blueheart who basically tells the moral of this fable throughout his time on the air. Government corruption is also on Zombie 3’s agenda – and although Fulci covers a lot of the same ground as Romero before him in both Night of the Living Dead and Dawn of the Dead, the ultraviolent government murder spree is still shocking.

Much of Zombie 3 lacks direction, but its most prominent elements are the pulsing, pustulent makeup effects and the synth soundtrack by Stefano Mainetti. The gore is quite well done despite going a bit over-the-top (there’s a ridiculous zombie baby scene that’s stupid and fun), and ultimately the violence is one of the main reasons to check out the movie. Mainetti gives a good score that works well to capture the atmosphere of each moment.

Zombie 3 isn’t groundbreaking and it’s riddled with flaws, but there’s a reason why it has continued to remain a prominent zombie movie in the horror genre. It’s ridiculous, cheesy, and more fun than it has any right to be, and what it lacks in emotional heft and seriousness it makes up for in gore. Again, that Zombie 3 even exists is a testament to the crew’s dedication, and perhaps that’s the most eye-popping thing about Fulci’s undying film.

Fulci’s movie is filled with violence, from gushing zombie bite attacks to half a woman’s body getting pulled out of the water to exploding heads. It’s a great, brutal time and the special effects really ooze well. There’s also a surprisingly effective bird attack. 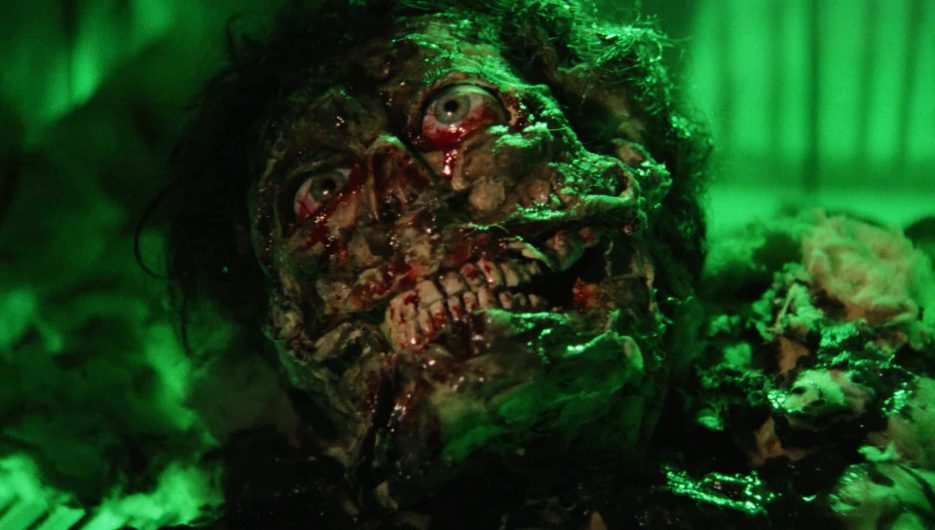 Surprisingly not too much nudity in this film besides a brief, non-revealing flashing at the beginning and Marina Loi wet in a white shirt. 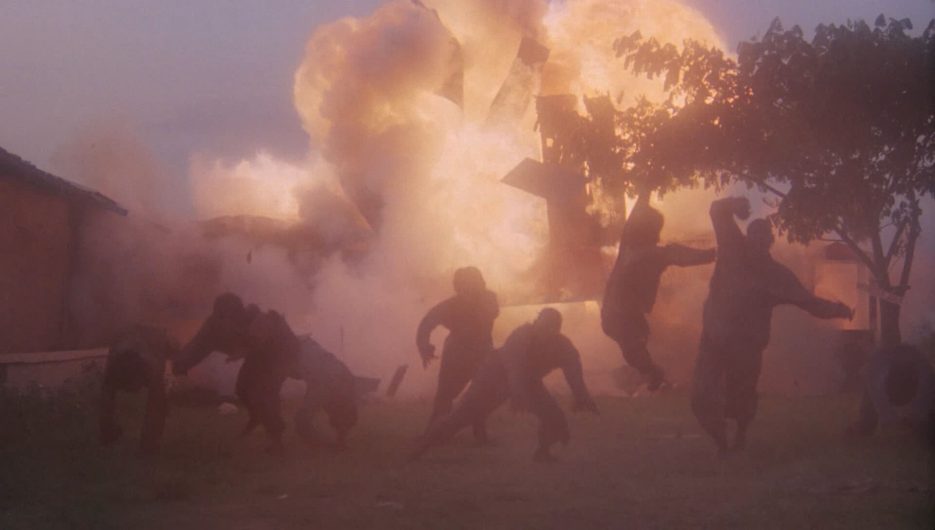 Severin Films has done a new 2k scan of the film (does not list the source) and has made sure that it is the full uncut 95 minute version of Zombie 3. This scan looks quite good; there’s some heavy grain that’s mostly present during sky shots, the red/green lighting, and the heavy fog scenes, but for the most part it is not distracting. Speaking of the fog and the red and green lighting, Severin has done a good job making sure that the color correction looks lush and natural. One noticeable flaw is the blown-out whites in natural lighting – especially any time a scene takes place outside. This creates a sort of halo effect around bright whites that does become distracting towards the end of the film when the characters make it into the jungle. While I believe this issue is present in all Zombie 3 transfers, it does seem like Severin’s release is a bit more pronounced possibly due to the color correction.

Severin has included a DTS-HD Master Audio 2.0 English track for the film which presents no issues and highlights Mainetti’s soundtrack. English subtitles are also included.

Zombie 3 has a number of features thanks to Severin Films including an audio commentary with Deran Sarafian and Beatrice Ring that’s actually quite funny – both banter with each other and make fun of the film’s cheesier moments. There are also a number of interviews including a new 18 minute featurette with Claudio Fragasso and Rossella Drudi who discuss their work on the film and Fulci’s poor health at the time. Massimo Vanni and Ottaviano Dell’Acqua give about 4 minutes of discussion about their work as stuntmen and stars in the movie; Marina Loi also talks for a few minutes about her work and her relationship with Fulci (often had a temper, but seemed nice enough). Bruno Mattei gives about eight minutes of discussion about his work on the film as a secondary director – he exposes some of the scenes he shot but also refuses to take credit for the film, handing it all over to Fulci. The last interview is a five minute discussion with special effects artist Franco Di Girolamo, who gives a tour of his workshop and shows off a few of the pieces from the film. There’s also a trailer included on the disc.

Besides the new extras on the disc itself, Severin has also been kind enough to include the film’s soundtrack on an additional CD. This is a great value for the price and fans of Zombie 3 should definitely pick this up, even if it means double-dipping if you own the 88 Films release; I haven’t seen that disc’s transfer, but the extras are vastly different between the two.