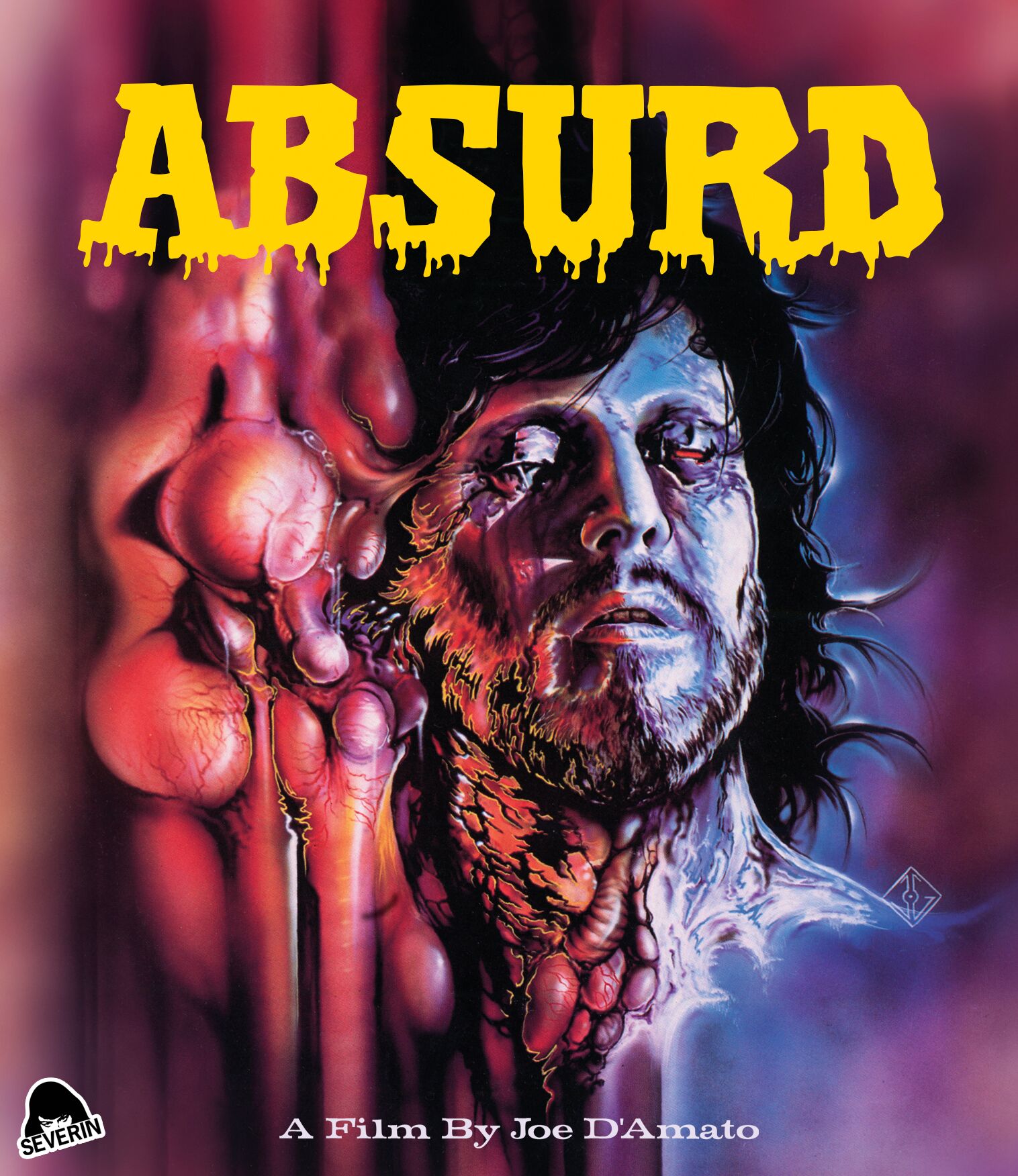 Though quite notable for his consistent adult and pornographic work, Joe D’Amato (nee Aristide Massaccesi, though he would oscillate between a number of noms de plume over time) also crafted a bevy of controversial horror films – some of which dabbled in a different style of perversion much like his XXX fare. Absurd, released in 1981, is perhaps one of his more accessible and better-structured films thanks to the help of George Eastman on script-writing duties, who also helped make D’Amato’s previous movie Anthropophagus something of a success as well. In some sense a sequel to that aforementioned title, Absurd basically offers up more of the same nastiness – this time following a female nurse and a family, including a young disabled girl, with whom she works.

D’Amato’s direction is fairly swift throughout the first half of the film, first documenting Mikos’ (Eastman) arrival in a small town after he disembowels himself on a fence post and winds up in a hospital where the doctors quickly find he can coagulate his blood and repair injuries. From there, D’Amato adopts a linear slasher storyline as Mikos rampages through the town, killing anyone who gets in his way and ultimately stopping to take revenge on a man who accidentally runs him down with a car. All the while, the American Super Bowl is going on and the police can’t be bothered to miss it, so they entrust Sgt. Engleman (Charles Borromel) and a Greek priest (Edmund Purdom) to track down a serial killer who can only be stopped by damage to his brain.

D’Amato’s inspirations are quite apparent throughout the film, notably drawing – intentionally or not – from John Carpenter’s Halloween series. Absurd often employs first-person camera optics or the trademark pose of a killer standing off in the distance; D’Amato even utilizes a storyline about a babysitter to cement those similarities. But Absurd goes a bit further than Carpenter’s mostly bloodless affair, with a lot of grotesque murders that often include increasingly more ridiculous stunts with appliances – a drill to the head, then a band saw, and finally death by oven.

Frankly, Absurd‘s title aptly describes the film itself, but it is certainly a fun journey as Mikos cuts a violent path through town. The storyline is barely present, but it’s also somewhat unnecessary – Mikos’ motivations are left as simple as can be, attributed to brain trauma that makes him insane, and so any attempt at backstory would be futile anyway. What Absurd gives viewers is a gory, sometimes comedic story about a crazed murderer, and for the most part its a bloody success.

D’Amato’s downfall, though, is in the last half hour of the film, set at the family’s house. It drags on for far too long, with D’Amato often drawing out scenes to excruciating length – like Katia’s (Katya Berger) attempt to escape her restraints. Trimming back some of D’Amato’s fluff would only have done Absurd a good turn, but it’s not enough to ruin the acerbic slasher.

Fans of slasher films and D’Amato’s past smut will certainly enjoy Absurd in much the same way as Anthropophagus, and as a pseudo-sequel to that film, that’s about as much as cult fans can ask for.

Severin Films has done an excellent job with this Blu-ray/CD combo pack release. The video is taken from a 2k scan of the original negative, and it looks absolutely great – there’s a heavy grain presence within some scenes, but this looks gritty as Absurd should, and it also manages the dark levels quite well while retaining great clarity. A couple damaged shots here and there, but for the most part, this is an awesome scan that certainly rivals 88 Films’ previous release and capitalizes on some of the rougher elements from that Blu-ray. The video includes both the English uncut version at 94 minutes and the alternate Italian cut (83 minutes), otherwise known as Rosso Sangue.

Audio comes in English LPCM 2.0 and Italian LPCM 2.0 for the Rosso Sangue version, and there are optional English subtitles for both versions of the film. Both tracks sound great, though I admit I do prefer the English due to slightly better dubbing quality (except maybe the voice actor for young Willy).

Extra features include a new interview with Luigi Montefiore (better known, at least in this film, as George Eastman) that lasts about 30 minutes – he gives a lot of insight into some of his other works as well as the writing process on Absurd and some backstory about working with D’Amato and Michele Soavi. Other bonus features are ported from previous releases, including an archival interview with D’Amato (Aristide Massaccesi) at around 17 minutes and an interview with Michele Soavi about his appearance as a biker in the film that is carried over from 88 Films’ previous release. A trailer is also included.

A great extra, though, comes within the package – the inclusion of a CD containing the soundtrack to Absurd. The film is a great mix of Italian prog rock and some Carpenter-inspired synth tracks, and it’s great to have this as an additional disc.

Severin Films gives fans exactly what they want with this release of Absurd, and it’s a great deal to grab both this and Anthropophagus while you have the chance.

Absurd is a great slasher-esque movie from Joe D'Amato that really only suffers from some bloated scene lengths. Severin Films has done a tremendous job on this transfer and has gone to absurd lengths to include a CD soundtrack.
Film
Blu-ray
Reader Rating2 Votes
4.4
Hosting screenshots is expensive. If you want to see more galleries, consider donating!