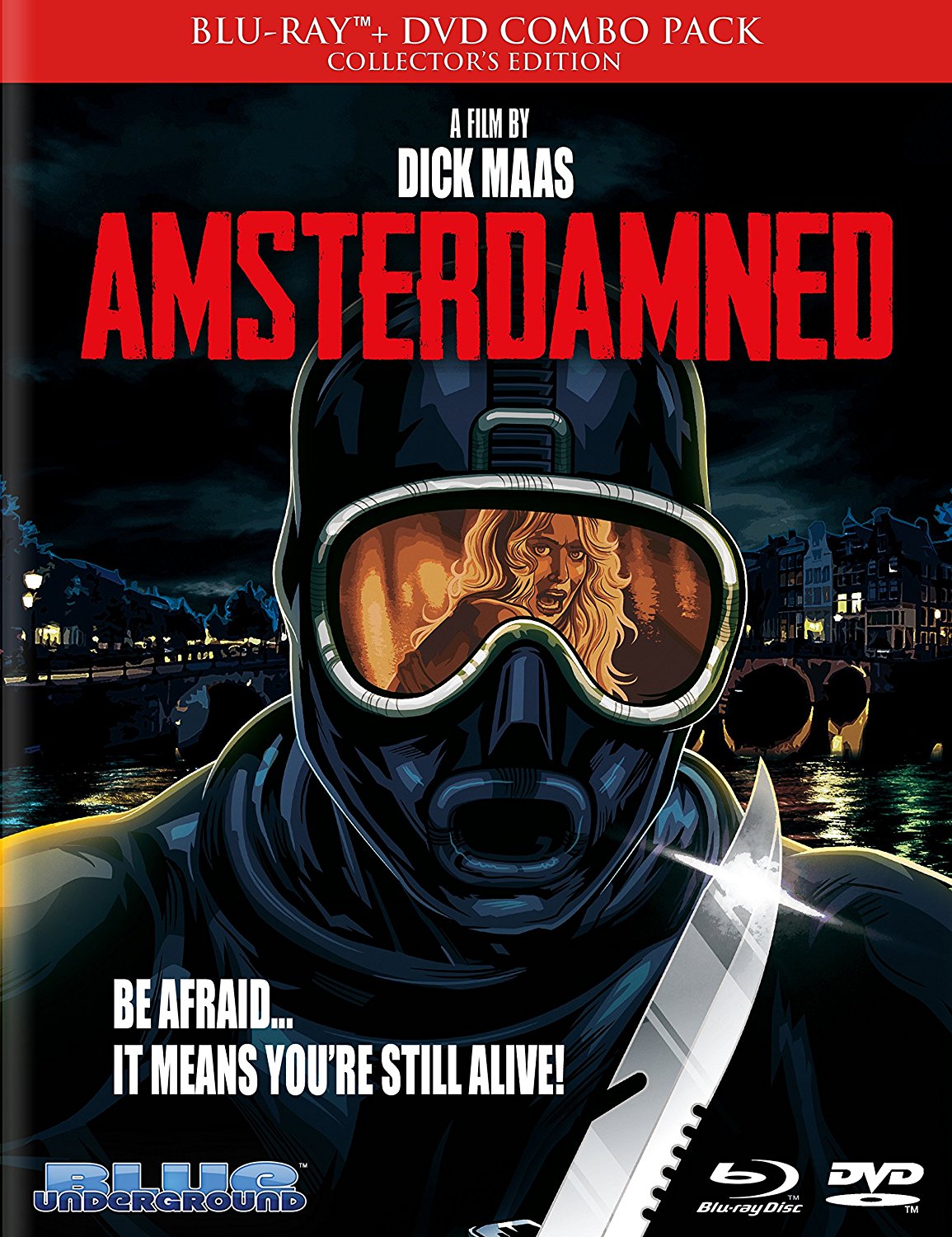 Something or someone is lurking in the canals and sewers beneath Amsterdam, and the mayor is not happy that his citizens are dying miserably violent deaths and creating quite a scene in a city that has recently been given a nice facelift. That’s why Eric Visser is called in to investigate – he gets the job done and he’s not afraid to leave his daughter home alone to do it. Oh, he also gets the girl on the side too – the man’s got it all, even able to expertly pilot a boat without any knowledge of how to start it. Eric Visser is 😎

Dick Maas is something like the Dutch version of John Carpenter: he writes, directs, and composes his horror films, and they often take on a strange combination of ideas. He hit paydirt in 1983 with De Lift (also coming soon from Blue Underground) about a killer elevator shaft, and he came back with a more nuanced slasher film in 1988 with Amsterdamned. The film follows a killer diver as he patrols the canalways in Amsterdam, murdering anyone unlucky enough to be tubing or boating through those districts. But even that synopsis is an overly-simplified version of what Maas offers with this deliciously black movie featuring car, bike, and boat chases, a prostitute sight gag, and a storyline about governmental corruption and – even more out of left field – radiation poisoning.

Maas utilizes Huub Stapel yet again in this film as the main character Eric Visser, the ultimate detective: sporting cool polo shirts and jeans, five o’clock shadow, and an unkempt head of hair, the man is clearly the investigator for this job. Visser’s calm and collected, although Amsterdamned loves to put him in stressful situations; he’s normally late to the murder, letting the killer get away after long chase sequences and putting him at risk of losing his job thanks to the mayor’s threats.

These moments allow Maas to explore Visser as a character, however subtle that may be. He’s a father of one and often not home for long stretches of time, leading his daughter to make her own decisions and sometimes putting her in danger unknowingly. He’s also a ladies man, though he just wants to settle down with a nice girl like Laura (Monique van de Ven), a strong woman in her own right who nearly helps solve the case by herself.

But Amsterdamned‘s main attraction happens to be Maas’ use of the location itself, highlighting the more beautiful aspects of the city’s various canals winding through the village. His soundtrack and point-of-view shots crib from Jaws, his execution certainly reminiscent of some of the better gialli; but Amsterdamned‘s weird and often dream-like maneuverings from one event to the next put the film in its own category of slasher, negotiating the boredom of regular detectivework and adapting a poliziotteschi mindset to add action and mystery to the horror.

The film doesn’t give the viewer much of a chance to guess the killer – his presence is kept a mystery until the very end, the motive delivered with a nonchalant way of the hand – but Maas’ dark humor and well-paced stalking sequences, along with excellently-choreographed stunt scenes, help elevate Amsterdamned above regular genre shlock, and even at nearly two hours, Amsterdamned rarely comes up for air. Maas’ film is a dive into delightfully fun territory.

While there are a number of murders in Amsterdamned, the amount of on-screen gore is kept to a minimum. The film is more about the suspense before the killing rather than the grisly act. However, we do see some of the aftermath including a bloody prostitute and the remains of some other victims, as well as an underwater knife attack.

Nudity is also at a minimum, but there are a couple of red-light district shots. The prostitute’s body is shown naked in the morgue, although not in a titalating way. Huub Stapel goes pantsless for a quick moment. Also, Monique van de Ven and Stapel get it on in a very fast and tasteful sex scene.

Disclaimer: Blue Underground has a replacement program in place for early releases of Amsterdamned due to some compression issues on the Blu-Ray. This review uses the original compression-addled release because of screener distribution.

Amsterdamned is taken from a new 2k scan of the original negative with approval from Dick Maas, and the film looks quite good because of the care taken during this restoration. Colors are pristine, there’s relatively no debris or damage, and color saturation looks very good. Dark sequences do lose their clarity (very apparent in the opening scene of the film), but otherwise Blue Underground has done a good job on the picture quality. However, all of that is marred with the compression issues on the first version of this Blu-Ray, which is sometimes very noticeable and at other times kept to a minimum. Dark scenes and very bright scenes show the macroblocking most prominently, although if you get close to the screen the compression becomes quite apparent, and smearing is easily noticed in still images. Unfortunately this reviewer does not have the new disc from the replacement program so I cannot comment on the picture quality without the compression, although based on what I can see through the macroblocking I would have to say the restoration itself is excellent.

Blue Underground has seen fit to include four different audio tracks for the film. The first track is a 5.1 DTS-HD Master Audio remix of the film’s original Dutch audio, which features a better distribution of the sound to satellite speakers. However, I found myself preferring the second track, the 2.0 Dutch audio, because of a more robust soundtrack and clearer dialogue. Also available is a 2.0 English track, which sounds very similar except for some changes to the dubbing. A French 2.0 track is also included, though the dubbing sounds somewhat tinny. Audio commentary with Dick Maas and editor Hans van Dongen is also included for those looking to get some behind-the-scenes info.

Blue Underground has included new artwork along with the reversible cover art and a DVD version of the film in the package, along with a booklet featuring an essay from Michael Gingold about the film. On the Blu-Ray itself is a vintage behind-the-scenes featurette that runs about 36 minutes – it’s not a new look at the film, but certainly worth a watch. There’s an interview with Huub Stapel boating through Amsterdam’s canals (about 9 minutes), and discusses his work on the film along with some of the injuries he sustained while filming the boat stunts. Stunt director Dickey Beer discusses the many issues with stunts on the shoot, including the length of preparation for the boat stunts, the use of trained horses that needed to be imported from England, and the problems attempting to film the boat’s bridge jump. The interview lasts 18 minutes and is quite a fun viewing.

Also included are still and picture galleries, Dutch and English theatrical trailers, and a music video for Lois Lane’s song “Amsterdamned.” These are fun additions.

Overall, the original version of the Amsterdamned Blu-Ray is somewhat problematic due to compression issues; however, the 2k scan does look good and various audio options add a lot of decisions for the viewer. The extras aren’t super impressive but do add about an hour of viewing material.