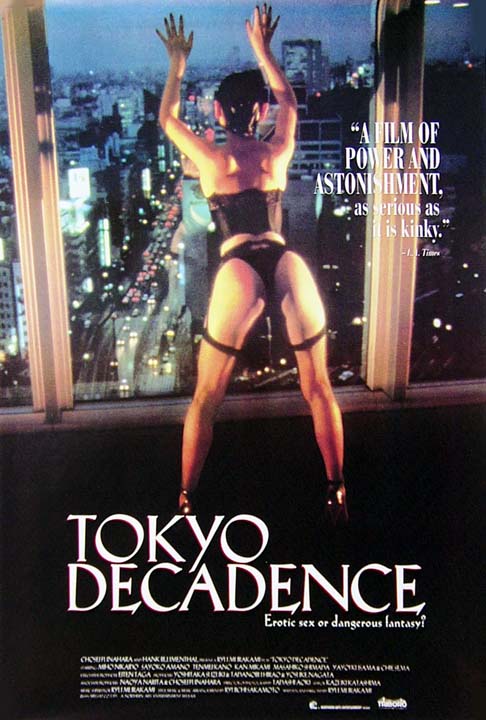 Let met get this out of the way: Tokyo Decadence is a great movie by most standards. Visually as dark and surreal as its subject matter, it’s shot and directed in a style extremely reminiscent of David Lynch – and particularly of Blue Velvet. In fact it kinda seems like director Ryu Murakami watched that one scene in Blue Velvet and said, “What if this, but a whole movie?”

Our heroine’s clients have a huge variety of demands, some of which are just totally fucked up – it’s a long list but it includes light asphyxiation, total asphyxiation, simulated torture, simulated murder, actual torture, rape and necrophilia. Gender roles are explored, reversed, and then explored again. Drugs are casually abused. Strange, unique personal fetishes are indulged and examined at length.

And Tokyo Decadence doesn’t pull any of those punches. Ryu Murakami—who also wrote the novel it’s based on—has no chill at all. A guy climaxes so hard that he apparently dies. There’s a lot of piss. Absolutely everyone in this world has a dark or crazy vice, whether they live in some low-rent single apartment or a swanky uptown penthouse.

Well, as far as out-and-out legit violence there’s not much. There are some horrifying glimpses into an even darker world of really violent, messed-up shit but most of what happens is the “consenting adults” sort of violence. People get whipped and strangled but it plays out to a chorus of moans and squeals and it’s all paid for in advance. Tokyo Decadence isn’t rated R for the bloodshed, is what I’m saying.

I mean… it’s literally about crazy sex. This one’s for mommy and daddy after the kids go to bed. It’s difficult to give a rundown of every single one of the huge diversity of explicit acts performed. There is no on-screen penetration, and the plentiful nudity is kept tasteful. To my knowledge most or all of the sex is simulated but that’s as much as can be said for its self-censorship.
There’s no male nudity, but there’s a part where a guy smokes crack and pees himself.